Consequences of Total’s withdrawal from the South Pars field 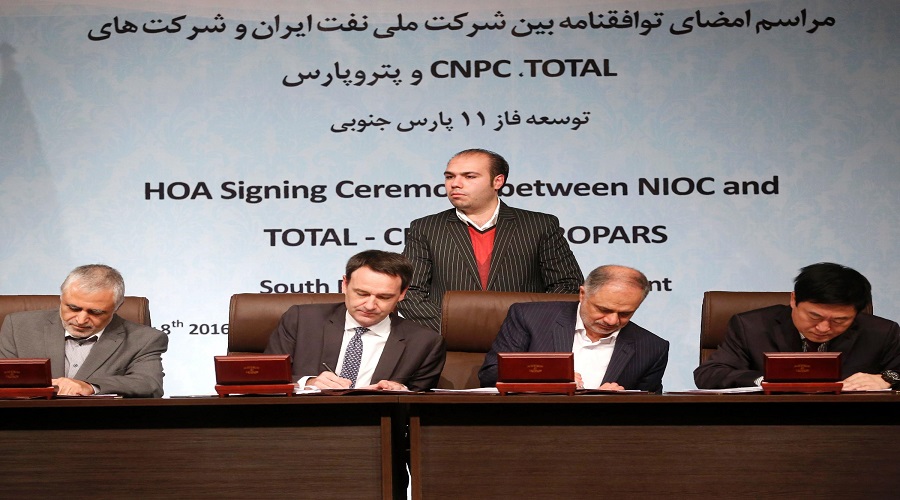 After reaching the nuclear agreement with the P5+1 group, Iran made preliminary agreements and memorandums of understanding with several foreign companies to develop oil and gas fields in the country. One of the most important agreements signed was with the French Total oil company to develop the 11th phase of the South Pars/North Dome Gas-Condensate field to support Iran’s production capabilities and enhance its efforts to transform into a center that exports gas in the future.

Despite the previous positive developments, executing Total’s project recently confronted several difficulties. The most important one is the increased American sanctions on Iran due to its ballistic missiles’ program and American President Donald Trump’s decision not to endorse Iran’s nuclear program. This made the company consider the likelihood of withdrawing again from the Iranian market in case new sanctions are imposed. Some Russian and Chinese companies can invest in this opportunity to fill the possible vacuum in the project.

One of the most significant moves that developed the Iranian gas sector was when Iran signed a pivotal deal with the French oil giant Total in July 2017. According to this deal, the company will handle developing phase 11 of the South Pars field. This will contribute to converting around 40% of Iran’s natural gas reserves, that are 33.5 trillion cubic meters -roughly 18% of the global total- into liquefied natural gas.

Total will be the major operator of the project with a share of 50.1%. China’s state-owned petroleum company CNPC would operate 30% while the Iranian oil company Petrobras would operate 19.9%. It’s expected for the project to have a production capacity of 2 billion cubic feet a day and for the gas to supply the Iranian market beginning of 2021.

Total’s project is an extension of Iranian tangible measures last year and which aim to make use of the South Pars field reserves. In April 2017, the Iranian government approved developing the phases from 17 to 21 for $20 billion in order to increase production by around 500 million cubic feet a day and finalizing the development of all phases.

Ever since Iranian sanctions were lifted off Iran, many Iranian officials said on different occasions that Tehran will work towards becoming a center that exports gas to a number of neighboring countries or Europe. The plan, according to the Iranian national oil company, is to export 128 billion cubic meters in the next years. This will make Iran the largest gas exporter in the world.

Although economic sanctions were lifted off Iran around two years ago, many foreign investors displayed caution at starting new projects in the Iranian market. This is due to several reasons. The most significant one is that the current American administration latest announced sanctions in January 2018 on Iranian institutions and political figures due to the country’s ballistic missiles’ program and human rights violations. In October last year, American President Donald Trump threatened to terminate the 2015 nuclear deal if Congress and US allies fail to amend the agreement in significant ways. This means it’s more likely for the Congress to approve new sanctions against Iran in the next couple of months.

It seems these negative signs confused companies that signed agreements with the Iranian government, including the French oil giant Total. In November, the company’s CEO, Patrick Pouyanné, had to say that the company will adhere to any laws that the American administration or the Congress imposes in terms of withdrawing from Iran. In this case, the company will have to look for a smooth mechanism to exit the agreement in the upcoming months.

Meanwhile, the French company’s possible exit comes as tensions increase between France and Iran due to the former’s worry of the repercussions of the ballistic missiles’ program and of Tehran’s regional policies in the Middle East. As for the Iranian government, Tehran believes that Total’s lack of commitment to its agreement will make it suffer plenty of losses. Iran’s Minister of Oil Bijan Namdar Zangeneh said on November 22, 2017 that Total will lose its investments if it withdraws from the agreement to develop the South Pars field.

Total’s loss of its investments in the Iranian market may be less than the cost of not committing to American sanctions as it’s possible that not committing would obstruct major investments in European or American markets. Considering all this, if Total does not withdraw from the Iranian market, it will, at least, slow the implementation of the development of the South Pars field.

It seems investment in Iran is confronting other challenges, which include the spread of corruption and bureaucracy. Recently, threats of political and security instability have increased as a result of protests that erupted in several cities on December 28 due to increased prices and unemployment and poverty. This may weaken trust in investment in general. Iran currently holds a low rank in the ease of doing business index of the World Bank for 2018 as it came in 124 out of 190.

Total’s possible withdrawal from the Iranian market practically means conveying negative messages to foreign companies which have the ambition to work in Iran. It sends a message, particularly western ones, that the investment environment is not safe. This will definitely undermine Iran’s efforts to enhance foreign investment, particularly in the oil and gas sector.

It seems Russian and Chinese companies will be more willing to risk and work in the Iranian market, especially considering Moscow’s and Beijing’s stance in supporting Iran. According to recent speculations, CNPC may be willing to take over Total’s share in the project if it withdraws from Iran in compliance with new American sanctions.

Russian companies can also take a risk and resume working in Iran despite increasing sanctions especially that they have ambitions to expand inside the Iranian market. Last November, the Russian oil company Rosneft signed a road-map to implement joint projects in the oil and gas fields via investments that are worth $30 billion. Other Russian companies are also cooperating in the liquefied petroleum gas industry and in the oil fields’ development with Iran.

The Russian and Chinese partners’ willingness to accept taking risks in the Iranian market does not mean that they are safe from possible American sanctions. This may force them to postpone some of their projects in the country. The Russian partner alone will not be able to fund all natural gas development projects in Iran especially amid the western sanctions that have been imposed on some Russian companies since 2014 due to the Crimea crisis. Meanwhile, Russia will not provide wide support to Iran in the field of developing natural gas as it views Iran as a possible competitor in terms of supplying gas to global markets in the future.

In conclusion, it seems the Iranian government’s deal with Total will gradually decline amid American pressures. This will certainly confuse the foreign investment scene in the Iranian market and undermine its efforts to develop the field of natural gas.