How Do Security Arrangements Tie the Rukban Camp to al-Tanf Base? 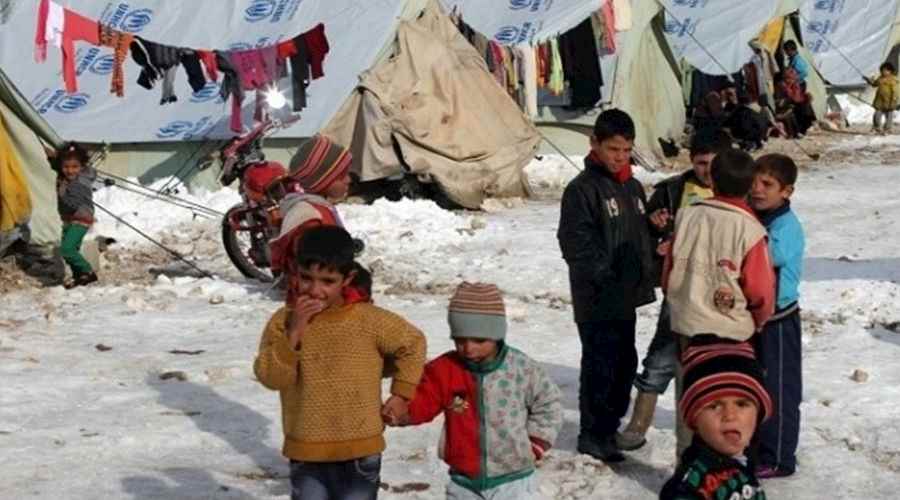 The Rukban camp on the Jordan-Syrian borders constitutes a double crisis of a humanitarian and political nature. While there are signs that the humanitarian crisis is on its way to be resolved through an understanding to alleviate the suffering of tens of thousands of the displaced persons in the camp, the political crisis remains very complex. This is primarily because of obstacles to dialogue between the concerned parties. The camp falls under the scope of the American al-Tanf base. While Russia and the Syrian regime are pushing for dismantling the largest human enclave on the road to al-Tanf, the US does not share the same desire on the grounds that there is still a need for guarantees for the return of displaced persons to their homes, which are currently under the control of the regime. This shows how far the crisis is linked to the fate of the US military presence in Syria as well as the Russian and Syrian positions.

All parties dealing with the Rukban camp view it as a “soft underbelly” for them. This point of view has been reinforced after ISIS’s terrorist attack on June 21, 2016, which left several Jordanian soldiers dead. In addition, both Russia and the Syrian regime consider the camp a US-supervised enclave, since it is located within the international coalition’s al-Tanf base and the so-called “Revolutionary Commando Army”.

A meeting involving officials of the Russian Reconciliation Center in Syria, Syrian security officials, the local administration and several tribal elders was held to resolve the camp crisis. The Russian-Syrian side indicated that the leaders of the international coalition refused to hold the negotiating session inside the camp, that the representative of the Center and the regime were denied access to the camp and could not see the conditions there. The Russian-Syrian side showed willingness to meet the conditions set by the US, i.e. not to take retaliatory measures against those who will return to their areas, which are currently under the control of the regime, and to legalize the status of deserters from military service.

However, the US administration says that these measures do not fulfill the required security guarantees. According to US State Department spokesman Robert Palladino, the US supports the United Nations call for a sustainable solution to the Rukban camp in accordance with the protection standards and by coordinating the efforts of all concerned parties, on the belief that Russian unilateral initiatives do not meet these criteria. The position of the tribes continues to oscillate between acceptance of the guarantees and fear of the expected fate.

At present, there is a tendency to transfer the camp’s displaced persons in one direction, the humanitarian corridor provided by the Syrian and Russian authorities. In light of the Jordanian-Syrian understandings that allowed for the recent administration of the common border, Jordanian Foreign Minister Ayman Safadi pointed out that there is a prospect for resolving the crisis. The Syrians and Russians are betting on supporting a UN role in resolving the crisis, because this can resolve a dilemma for all parties and hence contributes to security and stability.

The positions of the concerned parties on the camp are inseparable from their policies on other issues. The US position hinges on the future of the US military presence in Syria and the fate of al-Tanf base, not the fate of the Rukban camp, which means that it ties the fate of the camp to that of base, and whether it will agree to dismantle the camp in exchange for allowing the deployment of a 400-strong force or more in the Kurdish-controlled northern region. Therefore, the solution will be postponed to another round of deployment-related complexities, which may produce another proposal based on transferring the camp’s displace persons to another place away from the regime’s control. On the other hand, Russia and the regime consider that the solution to the problem now will put an end to the areas which lie beyond the regime’s control. This is evident in the Syrian regime statements which indicate that it wants to establish control and exert influence on all regions, especially the de-escalation zones, of which none remains but al-Tanf and Idlib.

Several indicators emerged in September 2018, enhancing the prospect that both Moscow and Washington would resolve the Rukban crisis, along the lines of the reconciliation scenario that took place in Eastern Ghouta, Daraa and Quneitra. At that time, meetings between the two sides were announced to allow the return of the armed elements, who accept the proposed settlement, to their villages and towns; those who do not accept the settlement would be transferred to Jarabulus in northern Syria. Local and international reports also indicated that three parties accepted the proposed options: returning to villages and towns and moving to Jarabulus. However, it seems that the American position on dismantling al-Tanf is what caused the plan to be postponed, which enhances the hypothesis of the shared fate of al-Tanf and Rukban.

While the Syrian regime has shown flexibility in dealing with the camp crisis, it does not exclude using force to put an end to this complex situation. On March 19, the Syrian Defense Minister Ali Ayoub said that his “country is capable of driving the US force out of al-Tanf”. This statement came in parallel with a military move by the Syrian army forces near al-Tanf base, according to the regime’s leaks, which suggest that there are preparations to respond to the possible escalation on both sides. If the US decides to maintain a military force in al-Tanf -according to US reports- half of the existing force, many analysts do not rule out that the regime may engage in a confrontation to test the reaction of the US, especially since all its allies are pushing in this direction. In addition, casualties among the US troops may place pressure on US president Donald Trump to withdraw his forces. There is also another possibility of an attack on al-Tanf from the Iraqi side not from the Syrian side, especially that Iran views al-Tanf as an obstacle.  Such developments may alter the situation of the base and the camp at the same time. However, many international powers may move to avoid this scenario for fear of its possible repercussions.

To sum up, the US will unlikely respond positively to the Russian-Syrian calls for the resolution of the Rukban camp crisis. Russia and the Syrian regime will continue to push the US towards adopting a position leading to an understanding on the issue, which would have direct implications on the political and security arrangements, which are currently being drafted in Syria.