Will the Sanctions Revive the Role of “Shadow Institutions” in Iran? 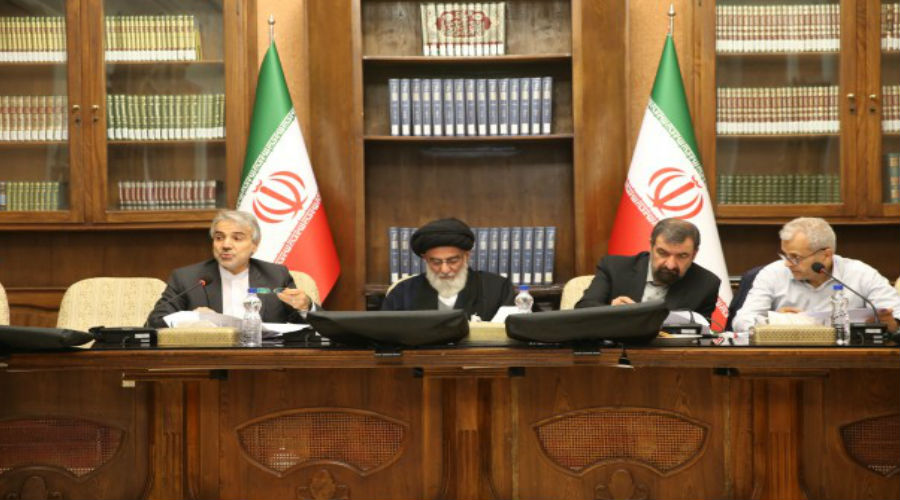 As the second batch of US sanctions, which are set to focus on oil exports, approaches, the government of President Hassan Rouhani are taking proactive measures to ease the sanctions that coincide with the spiraling internal protests due to the failure of handling various crises affecting living conditions.

However, many obstacles continue to undercut the ability of government to pass its plans to cope with the sanctions, most notably the regime’s attempts to revive the roles of certain institutions that have oversight powers over government programs, such as the Expediency Council, and to continue questioning the ministers, such as the Ministry of Interior and Ministry of Culture and Islamic Guidance on some security and cultural issues.

Rouhani’s government has narrowly obtained the approval of the Islamic Consultative Assembly to accede to the International Convention for the Suppression of the Financing of Terrorism. To do that, it relied on the support of most of the moderates and some of the leading fundamentalist conservatives, as the only mechanism through which it can facilitate banking dealings with other international powers, especially European countries, which continue to insist on neutralizing the effects of US sanctions on bilateral relations between them and Iran. The difference between proponents and opponents of the agreement narrowed to only 13, after the number of MPs who support the agreement reached 143, compared to 120 against it, with 5 abstentions.

Yet, this does not guarantee that Iran will accede to the convention, as it has to be subject to scrutiny by the Guardian Council, which has the power to vet the legislation passed by parliament, to ensure that they conform to the constitution and to identify any possible shortcomings.

The Rise of the Expediency Council

Although the Council’s involvement in the study of such conventions has been a common practice over the past period, as has been the case with the Anti-Money Laundering and Combating Terrorism Convention FATF, the regime is no longer content with its role in this context. It seems to be keen to involve other non-elected institutions in this process, like the Expediency Council, with the aim of tightening the noose on the government and exerting greater pressure on President Hassan Rouhani.

It is true that the President is a member of the Council, but it is also true that the latter, which has not played prominent roles in the past years, also includes political opponents of Rouhani, such as the former president Mahmoud Ahmadinejad and his former rival in the last presidential election, Ebrahim Raisi, along with Mohsen Rezai, the former commander of the Revolutionary Guards and Secretary of the Council,  Ahmad Jannati the chairman of the Assembly of Experts and the Guardian Council and Saeed Jalili the Representative of the Supreme Leader to the Supreme National Security Council.

Remarkably, the Expediency Council had made numerous observations on the UN Convention against Transnational Organized Crime (the Palermo Convention) considering it was not in conformity with the supreme policies of the regime, which are coordinated with the Supreme Leader Ali Khamenei, and not in line with judicial and economic security, according to the letter sent by the Chairman of the Council Mahmoud Hashemi Shahroudi to the head of the Guardian Council Ahmad Jannati on 10 September 2018.

Although the Guardian Council announced, on October 10, that it had resolved the problems that existed in some of the provisions of the agreement, asserting that its observations were applied, it returned the agreement back to the Consultative Assembly saying that the notes of the Expediency Council were not taken into consideration, a sign of the wide differences between the latter and the government, which appeared to face something a kin to “institutional alliance” dominated by its opponents under the supervision of the Supreme Leader Khamenei, who has the authority to appoint half the members of the Guardian Council and all members of the Expediency Council.

Perhaps it could be argued that the next period may see an increasing activity of the Expediency Council, which has rarely been at loggerheads with the government over legislation. The previous period in which former President Hashemi Rafsanjani was the chairman of the council before his death on 8 January 2017, saw a marked coordination between both sides, the political rapprochement between Rafsanjani and Rouhani was one of the variables that contributed to that.

It should be noted here that the influence of the fundamentalist conservative movement has featured prominently in the new composition of the council announced by Khamenei on 14 August 2017, as part of his constant endeavors to redress the balance of political forces when they begin to tilt towards one of the main political forces or movements.

In parallel with the rise of the political role of the Expediency Council, a strong campaign has been waged by powerful institutions in the regime against acceding to the conventions on combating the financing of terrorism and money laundering. In the post-ratification phase of the agreement in the Consultative Assembly, the IRGC has begun to promote the idea that the overall policies adopted by Rouhani’s government, since its assuming power in August 2013, have led to serious consequences for Iranian interests and security.

Thus, the IRGC has deliberately linked the concessions made by Iran to the nuclear deal and the pressure exerted by the government to pass the draft resolution for Iran’s accession to these treaties, on the belief that the two things have one goal: to curb Iran’s external role by diminishing its support for its allies from the non-state actors, in addition to the Syrian regime, and bring its nuclear and missile activities to an end.

The Pasdaran did not stop there, but it deliberately pointed out that institutions within the regime, such as the Guardian Council and the Expediency Council, would act as “a buffer” against government policies, a clear message that the government did not have the power to pass these legislation.

It was also striking that the opposition front for joining those treaties succeeded in attracting a number of the leading moderates who support President Rouhani, as was the case with the vote to join the International Convention for the Suppression of the Financing, where some of the MPs of the Omid (Hope) electoral list, which represents the largest moderate bloc in the Islamic Consultative Assembly, joined the opposition front, such as Shehab Nadery, Nabi Hazar Jeribi, Mohammad Reza Sebaghyan, Yahya Kamaly Bour, and Rouhollah Babay Saleh.

Without a doubt, the opponents’ eagerness to co-opt MPs from the Omid was aimed at countering the success of the government in garnering the support of a number of the conservative MPs to join those treaties, such as Ali Motahari Vice-chairman of the Consultative Assembly, who considered that joining such agreements would help the government’s efforts to facilitate financial and banking dealings with overseas, thereby enhancing its ability to reduce the repercussions of the new US sanctions.

To conclude, the Iranian government is facing internal crises at multiple levels, which are no longer confined to growing protests - which are supported by its opponents- against its policies, but also are affecting political decisions to implement its programs. Shadow institutions are being pushed to obstruct the government’s efforts in parallel with the increasing talk about the decline of the roles of some of the influential figures, such as the first Vice-President Isaac Jahangiri, whom the fundamentalist circles blame, in part, for the fall in the value of riyal, and Foreign Minister Mohammad Javad Zarif, whose role began to shrink versus other powerful officials in the regime.