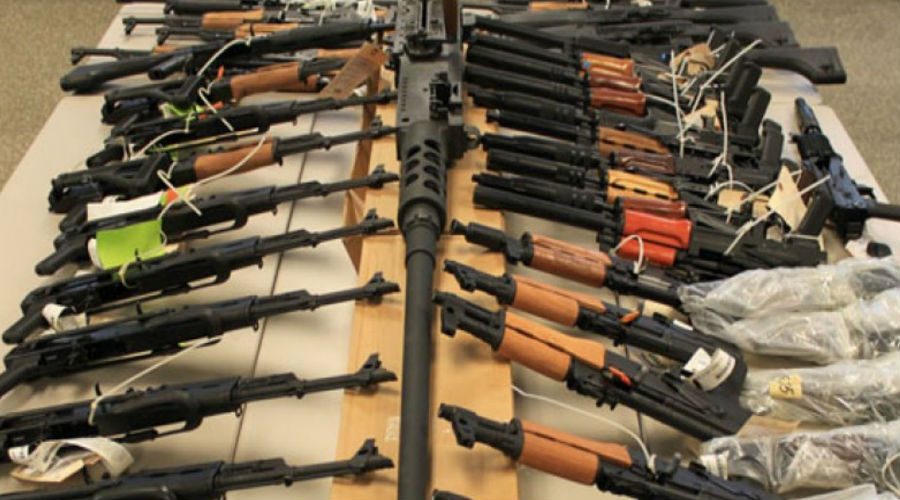 Stockpiling weapons, whether light, medium or heavy (such as launchers and missiles) by individuals, tribes, armed militias or terrorist organizations, has become one of the major force multipliers of instability in the Middle East region, especially in the Arab flash-points in Libya, Yemen, Syria, Iraq, Somalia and Mali, and perhaps in some relatively stable states such as Sudan and Tunisia. This phenomenon exists in mountainous and desert border areas, with different qualities and quantities, amid lack of any protective measures, fueling confrontations between parties to the armed conflicts in the region. Against this backdrop, armed groups take advantage of the fight against terrorist organizations to stock up weapons, armed militias use their geographical strongholds to attack their adversaries, and terrorist organizations dig tunnels to stockpile weapons, resolving individual or family differences by the force of arms, threatening neighboring countries, and even the “neighbors of neighbors”.

The possession of weapons is no longer limited to state institutions, whether military or security, which have the right to legitimate and forcible use of force. The wave of popular revolutions and the ensuing protracted conflicts led to the emergence of a pattern of multiple sovereignty and the growing clout of irregular armed groups. This came to be known as “parallel or hybrid armies” that consist of the remnants or major blocs of regular armies, armed militias, district battalions, sectarian groups, military wings, security committees, popular formations and revolutionary legions, clan groups, terrorist organizations and mercenary gangs, in what can be metaphorically called “private sector armies" and they have crossed the porous borders of the Middle East.

Managing the stockpiles of weapons and ammunition has become a source of concern in the Middle East, particularly after the increase in weapons and ammunition held by the aforementioned armed groups, as well as the lack of effective management and counter measures. The result is a proliferation of smuggling networks, especially for the unregulated small arms, which are illegally traded in crisis-ridden areas and flash-points through distribution, theft, diversion, transfer or resale, especially through porous borders.

Stockpiling various types of weapons have multiple impacts on the protracted instability of conflict-ridden countries in the region, which can be outlined as follows:

1- Fueling the confrontations between parties to the armed conflicts, which may explain the perpetuation of conflicts for more than seven years, with no sign of resolution on the horizons and without the emergence of a winner. On the contrary, there are many obstacles hindering the efforts to end those conflicts, particularly as some armed militias control most of the regular armies’ depots, as well as the air and sea outlets that allow them to receive more weapons and missiles.

The wave of internal armed conflicts that flared up in some states of the region in the aftermath of the Arab revolutions led also to the emergence of “war economies” or “economies of internal conflicts”, pushing interest groups on both sides of the conflict to perpetuate such conflicts since they constitute a major source of their huge financial gains, which will necessarily be threatened if civil wars and armed conflicts are to end or even subside.

Threats to the State

2- Armed groups exploit the war on terrorist organizations to stock up weapons, increasing the risk of accidental explosions at weapons and ammunition depots, particularly in densely populated areas. This has led to civilian casualties, which has already been evident in Libya and Iraq, where armed militias take advantage of the threats posed by ISIS, al-Qaeda among others, to the security of the state and society, to be present in confrontations, possess and even stockpile weapons and ammunition.

At a lecture at the Defense University for Military Studies in the Green Zone on June 23, 2018, Iraqi Prime Minister Haidar al-Abadi accused such groups of exploiting the war on ISIS to “stock up arms and threaten the state”. His remarks came in the aftermath of an explosion in the ammunition depot in Sadr City on June 6, killing several people. Al-Abadi emphasized that “there are citizens who have possessed a weapon to defend themselves in the past, they are different from those groups. All weapons must be in the hands of the state only”.

3- Armed militias exploit their geographical strongholds to stock up weapons: A case in point is the behavior of the Houthis who stockpile weapons in Sa’dah and other towns to launch ballistic missiles at Saudi Arabia and the liberated Yemeni areas. In addition, on April 12, the Yemeni Ministry of Foreign Affairs accused Iran of converting its embassy building in the capital, Sana’a, into a depot for weapons, explosives and missiles, as well as militia training center and operations room where Iranian military advisers meet with its leadership. In an official statement, the Yemeni Foreign Ministry denounced Iran’s interference in Yemeni affairs in support of the coup, causing chaos and instability.

4- Searching for tunnels dug by ISIS with the aim of stockpiling weapons and equipment and moving from one area to another, hiding from the strikes of regular armies and air raids of the international coalition forces. This applies to ISIS cadres after their exit from the main spheres of influence in Iraq and Syria and moving towards the border areas by the end of 2017, where they began to rely on tunnels and the construction of underground cities.

The Status of Families

5- Resolving individual or family disputes with the force of arms due to the spread of the personal armament pattern, as an acquired right of citizens in many conflict zones, which cannot be abandoned in such disputes, especially those of tribal and clan nature. Libya and Iraq suffer this problem, especially after the collapse of the regimes of Muammar al-Qaddafi and Saddam Hussein, as groups and individuals inherited large arsenals of arms and stored them in homes. A heightened sense of insecurity, due to the collapse of the security apparatus and all state structures inherited from previous political systems, helped this trend grow.

In a statement issued on July 17, the interim government’s Bureau of Investigation in Al-Bayda warned Libyan citizens against stocking up weapons and ammunition in their homes; the Bureau will conduct a search campaign in places containing weapons and ammunition for confiscation and placing them in designated areas. The Bureau called on the Ministry of Awqaf to make sure that mosques raise the awareness of citizens not to stockpile weapons in their homes. This was the case after the collapse of the al-Qaddafi regime, in such a way that prompted individuals and tribes to keep arsenals of weapons which become highly important amid the alarming proliferation of weapons in the hands of dangerous persons and armed groups.

6- Threatening neighbouring states and the “neighbors of neighbors”: Stockpiling weapons is not only a direct threat to domestic security, but also an alarm to the neighbouring countries, given the potential entry of such weapons to terrorist groups targeting their interests, highlighting the risks of Libyan arms moving into some neighbouring countries, particularly in the light of the flow of arms to various Libyan groups despite the international embargo. Libya has become a major point for stockpiling and distributing weapons in the Middle East, which explains the significance of seizing five weapons depots, in December 2016, in the town of Ben Gardane on the Libyan-Tunisian border, containing anti-aircraft weapons.

The UN envoy to Libya, Dr. Ghassan Salama, in more than one international forum, called for the continuation of the international embargo on arms exports to Libya since 2011. “The international arms embargo has never been more relevant than now. This country has more than 20 million weapons”, he said in a previous briefing to the Security Council. The Head of the Russian contact group on intra-Libyan settlement, Lev Dengov, on December 13, 2017, called also for caution in lifting the arms embargo on Libya.

In summary, stockpiling of weapons by fighters and civilians is the main source of cross-border violence in the region, as well as a major obstacle to the reconstruction of collapsed or fractured states, which requires a package of mechanisms to confront this phenomenon, especially small and medium-sized spaces, at homes, hospitals, schools, museums, gardens, farms and playgrounds, which points to the complexities of getting rid of the habit or the strategy of stocking up arms.

Here are a set of approaches to respond to the dangers of stockpiling weapons in the Middle East:

1- Bolstering national armies: Beefing up security in communities affected by armed violence requires the support of regular armies and the integration of informal fighters that are capable of being incorporated into legitimate frameworks.

2- Relevant authorities in the relatively stable states should offer its population a time limit for handing over their weapons; the time limit is to be renewed according to the circumstances, with strict legislation criminalizing keeping such weapons including severe and deterrent sanctions. The initiative of Moqtada al-Sadr to hand over the weapons to Iraqi factions to state authorities, may be a case in point.

3- Setting up an international fund to seize and collect weapons in conflict zones, such as Libya, a call made by the former Egyptian Foreign Minister, Nabil Fahmy at the International Ministerial Conference on the situation in Libya, held in Rome on 6 March 2014. This is to be done in coordination between the United Nations and the army, to prevent terrorist groups and organized crime syndicates from threatening Libya’s security.

4- Communication between the disarmament and reintegration departments, agencies, programs and missions of the UN, the Arab League and the African Union, in support of states emerging from conflict, especially as it is a multidimensional process and requires an integrated approach to ensure that these actors work in unison and the processes achieve the desired objective.

5- Launching awareness-raising campaigns against the dangers of stockpiling weapons, whether through civil society organizations or the media. In this regard, the “I Read” book club in Misrata, Libya, organizes cultural exhibitions in which books are displayed in arms and ammunition crates. The idea behind the use of boxes is symbolically designed to replace years of violence with the reading habit and using “books” as weapons, considering that “the pen is mightier than the sword” and “the book is more important than gun”, according to the founder of the club Sofyan Qusaybat.