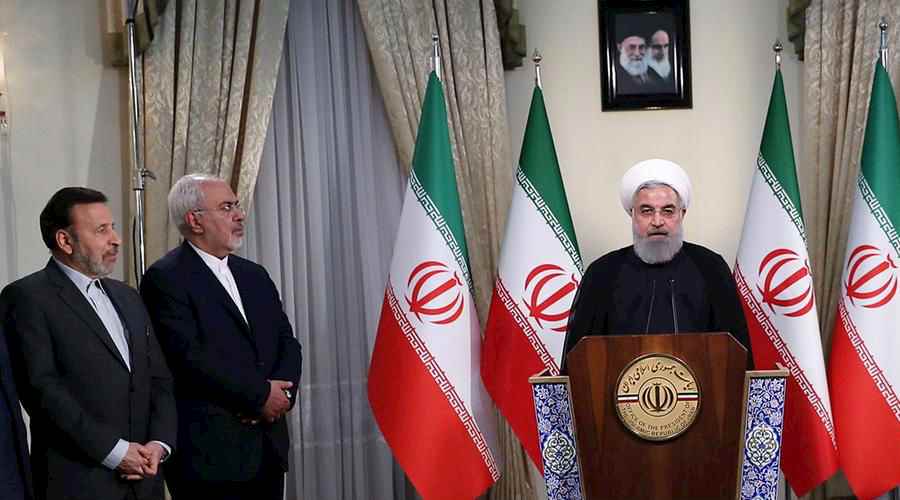 Iran has limited options regarding staying in the nuclear deal after the U.S. pulled out from the deal and U.S. Secretary of State announced a new strategy on Iran. The reason is that it is difficult to rely on the European Union to keep the deal in place, especially because Brussels and Washington agree on the need for Tehran to stop its interventionist policies in crisis-hit countries in the region, although they disagree on the need for keeping the deal. On the other hand, Iran is well aware that it is difficult to count on Russia, especially after Moscow announced that all foreign forces should withdraw from Syria, including Iranian forces.

Additionally, continued crises and internal protests that hit Iran recently increases the cost of any escalatory option to counter foreign pressure. That is because of potential economic repercussions that can reignite domestic crises leaving Iran with only two options. The first is to escalate and resume the nuclear program, which imposes disastrous implications. The second is to acquiesce to regional and international demands, which undermines the legitimacy of the regime.

Continued pressures imposed by the U.S. policy have confused Iran’s calculations leaving it with only limited options. Each option will cause repercussions for its interests, especially after U.S. Secretary of State Mike Pompeo announced, on May 21, 2018 the new U.S. strategy on Iran, which pushed twelve demands for reaching a new deal.

Despite the consequent, and sometimes conflicting threats issued by Iranian officials, Tehran preferred to wait before it takes final decisions on how to deal with the new U.S. policy. It is also keen on gaining more time, especially during its talks with European states, Russia and China through which it seeks to formulate a supportive international position that may help it reduce these pressures and expand its room for maneuver. This was evidenced in a recent tour made by Foreign Minister Mohammad Javad Zarif to Beijing, Moscow and Brussels in the period from May 13 to 15. The talks will be followed by another meeting scheduled between Iran and on May 25 to discuss ideas presented by the European states to increase the chances of keeping the nuclear deal in place.

But the policy pursued by Iran may not eventually produce positive results for its interests for the following reasons.

Although European states support keeping the nuclear agreement to the extent of risking their relations with the United States, this does not negate the fact that they still show reservations about Iran’s role in the region, especially in crisis-hit states such as Syria, Lebanon and Yemen. This can contribute towards expanding the scope of their agreement with U.S. policy on this issue in particular.

This was evidenced in European officials’ calls to Iran to reduce its regional interference while also halting activities linked to the development of the ballistic missile program. Not only this, but, some European officials adopted new proposals indicating that financial aid could be offered to Iran in return for backing down from regional interference, as revealed by several recent reports, This is similar to the approach pursed with Turkey to address the crisis over refugees and migrants the Middle East who arrived in Europe in recent years.

Nonetheless, it is difficult for Iran, at least currently, to accept such initiatives for considerations. These considerations are related to its persistence to continue its regional expansion for which Iran’s financial resources were drained for several decades, as well as to its incomplete confidence in the extent of seriousness of such initiatives and their ability to transform into decisions. This is due, in particular, to pressures put by the United States on European states to change their policy towards Tehran.

2- Persistent doubts. Despite the strong relations with Russia and China, there are views in Tehran that it is not possible to rely significantly on the possibility that either state would, at a later stage, become an international supporter that can help Iran counter pressures put by the U.S. policy.

In addition to the calculations and interests of Beijing and Moscow, the United States appears to be well aware of the importance of reaching understandings with both parties about mechanisms for dealing with Iran’s nuclear and regional ambitions, especially after the new U.S. strategy was announced.

What should be noted here is that Tehran’s mistrust in reliance on Russia in particular became evident in the past period, especially after it rushed to stress that no one can force it to withdraw from Syria. This was in response to statements delivered by Russian President Vladimir Putin, during his meeting with Syrian president Bashar Assad on May 20, 2018 in Sochi, where he called for the withdrawal of all foreign troops from Syria.

The Iranian media were quick to dispute the Russian statements and stress that they were not addressed to Tehran. Iran’s  keen interest in issuing a strong response indicates that it has several concerns over the trajectories of the policy pursued by Russia in Syria, as well as understandings reached with adversary powers such as the United States and Israel. Moreover, the media tried to emphasize that Iran is the major power in control of the trajectories of the conflict in Syria.

3- Internal pressure. Iran came under pressures in both the regional and international arenas at a time when its internal crises persist, triggering wider popular protests against the regime’s policies. Most recently, protests broke out in the city of Kazeroon in Fars Province and intensified since May 22 against a previous government decision to divide some districts of the city.

Continued internal crises aggravated by policies adopted by the regime at the internal and foreign arenas does not provide it with several options to deal with pressures imposed by the new U.S. policy. This is especially so given the considerable attention given by the United States to Iran’s internal issues, and reflected by a string of statements delivered in support of protesters.

Hence, the regime appears to be well aware that any escalatory option against Washington will have direct repercussions inside Iran, especially after Pompeo threatened to impose the strongest sanctions in history on Iran if it resumes its nuclear program and steps up uranium enrichment to the 20 per cent level.

In other words, risking international isolation once again and a direct confrontation with the United may further fuel Iran’s internal crises given that the new sanctions will impact the Iranian economy and impose possibly low limits for foreign investments thus restricting the government’s ability to deal with these crises.

Based on the above, Tehran will not have but the option of betting on success of the European states in reaching  a compromise formula that can allow keeping the nuclear deal in place, and ensure Iran will continue to make economic gains from it. But this option may not continue for a long time, due to several obstacles facing it, and here lies the problem, or rather the dilemma facing Iran. Failure of this option means that Iran will only have nothing to do but back out from the deal and ramp up uranium enrichment. This would impose severe consequences, or give in to U.S. and European pressures for new talks that are not confined to the nuclear program but also include Iran’s regional role. The internal and international cost of this option will be so high that the regime may eventually become unable to pay.