Will India Keep Buying the Iranian Oil After US Sanctions? 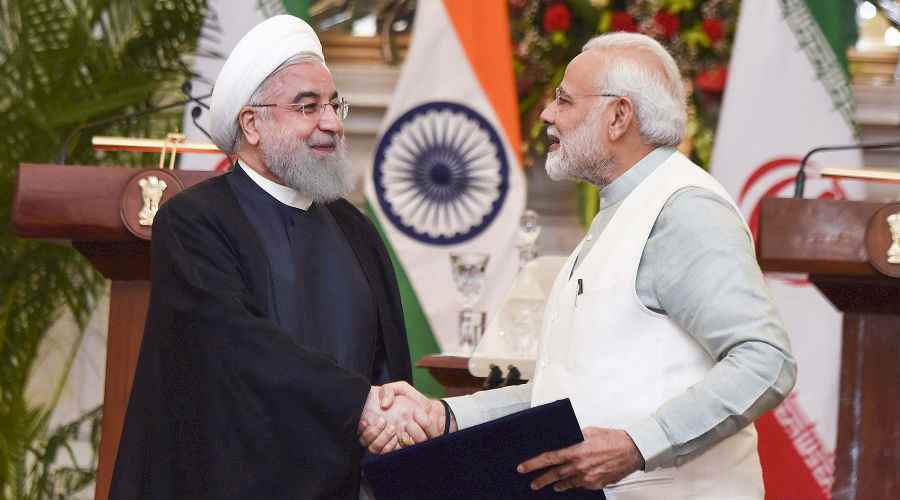 The Indian energy sector faces a dilemma amid the US administration plans to impose the second batch of sanctions on Iran in November. The US exerts pressure on the main buyers of Iranian oil, including India, to stop importing it in the coming period. For India, Iranian oil is one of the indispensable options for its energy security because of the preferential terms granted by Iran. Despite the Indian stance rejecting the US sanctions, Indian refineries have decided to halt the Iranian oil shipments starting from next November, and hence they may turn to other producers to fill the potential gap, but at a higher cost.

India is one of the countries that has greatly benefited from the final nuclear agreement between the P5 + 1 group and Iran. India increased its purchases of Iranian oil in the last two years, hitting a peak last May at 705,000 barrels per day (bpd), the highest level since October 2016, an increase of 45% compared to the same month in 2017.

On average, India imported about 583,000 bpd of Iranian oil in the first half of 2018, up 6.5% over the same period last year. Iranian crude has always been an indispensable option for Indian refineries to secure their energy as Iran sells its oil on the Indian market under attractive credit terms and free shipping, as well as the lower cost of transportation due to the geographical proximity between the two countries.

In this context, Iran usually grants India a grace period of up to 60 days to pay for its oil purchases, which is twice the amount of time that other producers give, plus a discount on freight cost of more than 60%. Moreover, many Indian refineries have been equipped to process Iranian oil, which means they cannot easily switch to other suppliers.

In addition, the two countries have other common interests, especially in the development of the Farzad gas field. Over the last months, a consortium of Indian companies has offered to invest up to $11 billion to increase their productivity and build the infrastructure needed for their activities to start exporting gas to international markets, and of course India.

Apart from energy, cooperation between Tehran and New Delhi extends to one of the strategic projects, namely the development of the Chabahar port in Iran, which is set to connect India, Iran and Afghanistan without going through Pakistan, for which India has earmarked investments of up to half a billion dollars.

The second batch of US sanctions against Iran, beginning next November, which will target Iran’s energy sector, pushing Iranian oil importers to cut their purchases like japan, or completely stop importing Iranian oil shipments, such as South Korea, as early as last August. For India, the US administration has exercised pressures to dissuade it from buying Iranian oil, as evident in the statement of former US ambassador to the UN, Nikki Haley, on June 27, 2018, urging Indian Prime Minister Narendra Modi to reduce his country’s dependence on Iranian oil in exchange for allowing India to continue to develop the Iranian Chabahar port, in a swap that seems unacceptable to the latter.

For its part, India rejected the US sanctions, which was confirmed by Indian Foreign Minister Sushma Swaraj on May 28, 2018, by saying that “India follows only UN sanctions, and not unilateral sanctions by any country” such as the US sanctions. However, some Indian refineries, such as the Chennai Petroleum Corporation and Reliance Industries, yielded to US pressure and decided to stop buying Iranian oil as soon as new sanctions are introduced in November.

Meanwhile, the Indian financial sector seems also wary of the fallout from the US sanctions, pushing the State Bank of India to stop dealing with oil-related payments to Iran from next November, which could severely affect the levels of crude oil imports from Iran, according to the Indian Oil Corporation.

These developments caused India’s imports of Iranian oil to plunge, according to the latest available data, to about 523,000 bpd in August, a 32% dip from the previous month, but still 56% higher than the same month last year.

Apparently, New Delhi will not yield easily to the US pressure to stop purchasing Iranian crude. It is extremely difficult for it, and for other buyers, to halt all imports. However, India is at the same time keen to show compliance with US sanctions to avoid wide disagreements with the US.

That is why some analysts think that India will continue its negotiations to get US sanction waiver to buy Iranian crude. This coincides with a relative change in the US position and Washington’s hint, according to US secretary of State Mike Pompeo, to the possibility of granting waivers to some countries.

Alluding to his country’s insistence on importing Iranian oil, Indian Oil minister Dharmendra Pradhan said on October 8, that two Indian companies had ordered the purchase of Iranian crude in November, probably the Indian Oil Corporation and Mangalore Refining and petrochemicals. At the same time, suggestions were made that starting from November Indian refineries should pay for their oil purchases in rupee.

On the other hand, the Indian Minister’s statement can be interpreted and understood as a signal from his government to both the US and Iran that a limited number of Indian oil refineries will continue to buy Iranian crude, which means reducing oil imports, which would be relatively consistent with the US, but at the same time the import will not be completely halted.

In any case, if India cannot import Iranian oil at the same levels, it will be forced in the coming months to switch to other oil producers to fill the gap. Among the possible options available to it is to import oil from the US or Middle Eastern countries.

Yet, all possible options for closing the oil gap, after the US sanctions, seem to be costly. Between 1 to 1.5 million bpd of Iranian oil is expected to be removed from the world market in the coming months. This will drive up oil prices above the current record levels of up to $80 a barrel and increase India’s fuel import bill, especially after the rupee lost 13% of its value against the dollar since the beginning of this year.

According to the data of the 2018/2019 Indian budget, the government has set the price of oil barrel to an annual average of $65 a barrel, which means the government will have to cover more than $10 per barrel of oil imports in the coming period.Moreover, the government has set the exchange rate for the rupee at 65 per dollar, but in October the value of its currency has further plunged, driving the exchange rate to 74 rupee per dollar, which will raise the cost of oil imports. India would not also be able to get the same preferential terms from Iran, which would cause added loss.

In conclusion, it has become difficult for India to keep buying the Iranian oil at the same levels of the past two years, which will push it to fill the gap from other costly sources, amid a marked deterioration in the exchange rate of its currency and a spike in global oil prices.