Why did the #IranProtests Erupt Again? 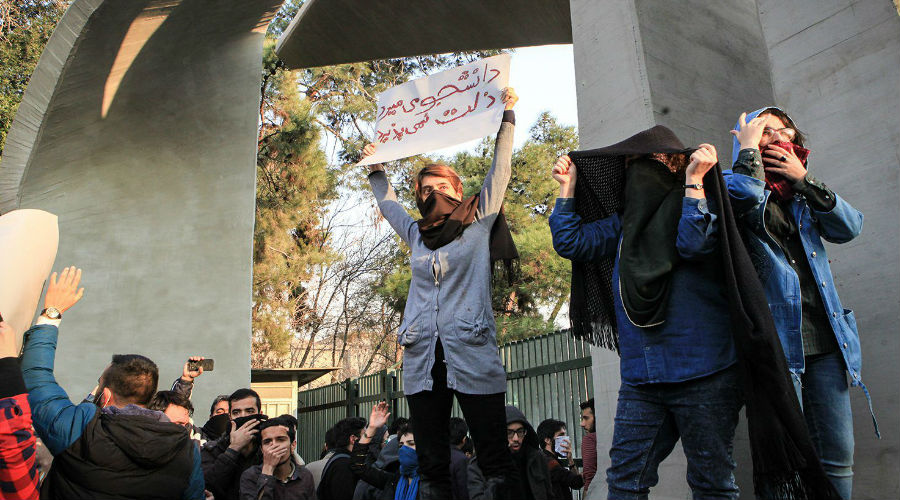 After the relative calm in various Iranian provinces and cities, protests have flared up again in Shiraz, Najafabad, Bandar Abbas and Kerman, condemning the policies of the regime, chanting “Death to the Dictator”, almost a month after the outbreak of the first wave of protests in Mashhad on 28 December 2017.  This shows that the regime has not yet been able to contain the protests or to reduce its momentum, which helped them spread from one province to another. Thus, protesters have stepped up their demands, from improving living conditions and reducing unemployment, inflation and poverty, to stopping the financial and military drain abroad, despite overall measures taken in the past period.

Although the recent protests did not reach such stage that could pose grave threats to the regime, renewed protests show that the regime has not succeeded in tightening its grip on the domestic front. The current demonstrations may evolve to such levels that put greater pressures on the regime, indicating that the underlying causes remain unaddressed, which can be explained in light of several considerations, the most notable of which are:

1- The regime’s insistence on pursuing the same policies, especially at the regional level. It was evident that the regime was trying to send messages to regional and international powers concerned with various Middle East crises that the internal crisis caused by the protests, would not force it to backtrack on supporting its regional allies, regimes and various terrorist organizations, such as al-Assad's regime, Hezbollah, the Houthi movement, the Popular Mobilization militia and other cross-border sectarian groups established and trained by the Revolutionary Guards’ Quds force in order to support Iranian expansionism.

This insistence was evident in the statements made by the Supreme Leader’s senior advisor for international affairs, Ali Akbar Velayati, on 1 February 2018, coinciding with the celebrations of the 39th anniversary of the Revolution, saying that “Iran’s influence in the region is inevitable”, adding that “Iran does not intend to abandon the oppressed nations in the region. Our presence in Syria, Iraq, Palestine and Lebanon is in coordination with the governments of these countries”.

Consequently, many estimates suggest that the repercussions of recent protests may be misinterpreted by the regime, leading it to further increase its interventionist policies in the region and not vice versa. This runs contrary to the key demands of protesters, who called for changing these policies, focusing on addressing internal problems rather than interfering in Syria, Lebanon and the Palestinian territories.

2- Embracing conspiracy theories by continuing to attribute protests to outside schemes that aim at undermining the foundations of the regime. This was evident in the accusations levelled by the supreme leader Ali Khamenei at protesters, claiming that they “carry out a rebellion to overthrow the regime”, which means the regime has not yet acknowledged the causes that led to the eruption of protests, particularly ignoring the daily living problems facing Iranians at various levels, which aggravated such problems and constrained the ability of successive governments to come up with solutions. This is in addition to rampant corruption, money-laundering operations, drug trafficking, among others.

In this context, Khamenei claimed the existence of “schemes” that had been hatched months ago under the supervision of the United States, Israel and Mojahedin-e Khalq Organization (MKO) to enhance the chances of provoking strong protests against the regime that gradually move from small towns to the capital Tehran.

As a result, the regime may respond by adopting a policy of escalation in the region, thwarting any efforts to reach political settlements for the various regional crises, which the Iranian interventions played a major role in their exacerbation.

The mainstream media loyal to the regime have begun to lend particular relevance to these allegations, as was evident in an article by Hossein Shariatmadari, editor-in-chief of the Kayhan newspaper published on 23 January 2018, titled Juha’s nail, claiming that there was coordination between external parties, in reference to the U.S. specifically, and some internal groups that participated in the protests, exploiting the power possessed by the U.S. President Donald Trump to decide every four months to suspend or renew sanctions against Iran, in order to maintain the high prices of domestic goods and hinder the government’s efforts to attract more foreign investment, hence maintaining the root causes of the protests and possible renewal.

Thus, the regime attempts to ignore or downplay the importance of the main motives behind these protests, which stem from its foreign policy, whether the continuing violations of the nuclear agreement, or the negative interference in the internal affairs of regional states and Tehran's support for terrorism.

3- Maneuvering: Apparently, the protesters have deemed government’s economic measures insufficient. Those measures have only stopped short of introducing new fees or taxes and has frozen removing fuel subsidies, but they did not affect financial allocations for the Revolutionary Guards or the religious organizations used by Iran to support its expansionist ambitions abroad.

Accordingly, several estimates suggest that the regime is trying to widen the room for maneuver and freedom of movement available to tackle the pressures of protests without a genuine willingness to address the real motives that led to their eruption.

4- Good cop, bad cop strategy: President Hassan Rouhani’s warnings to the supreme leader and the Revolutionary Guards about the need to act to avoid the fate of the Shah, by addressing the daily living problems of Iranians, did not receive remarkable attention in the domestic arena. Many estimates considered them part of the “good cop, bad cop strategy” within the regime’s institutions to weaken the momentum of protests and reinforce the regime’s ability to contain them.

In other words, they imply that there is no significant difference in the president’s positions from those of the supreme leader and the Revolutionary Guards, especially as Rouhani was keen not to raise controversial issues with other parties in the regime and 'not to criticize the security measures that were taken by the latter against the protesters'.

In conclusion, it may be argued that the renewed protests against the regime demonstrate that the root causes that gave rise to the #IranProtests remain unaddressed, which increase the likelihood of a stronger crisis in the near future, to which the regime may not be able to apply the same tactics.