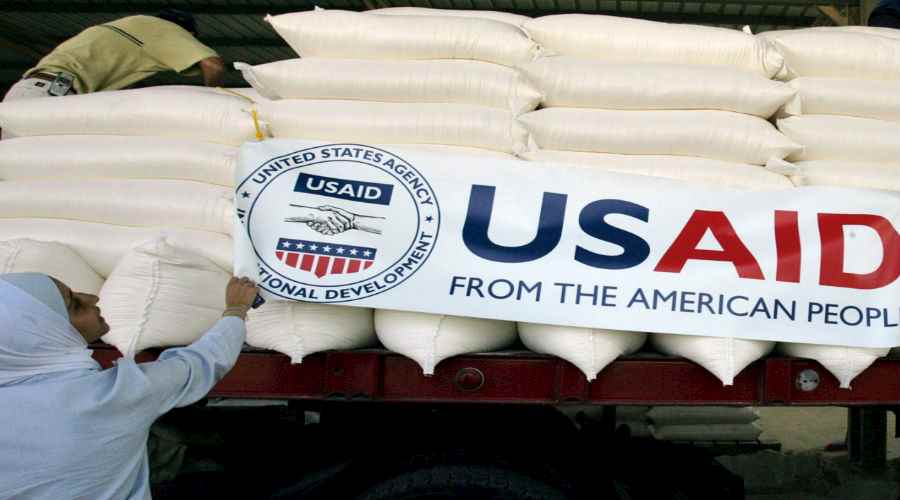 Most American administrations, whether republicans or democrats, used foreign aid to achieve three prominent aims that serve their interests as the largest foreign donor. These aims are achieving American national security interests by attracting geopolitical allies, serving economic interests related to supporting exports and establishing consumer markets, and serving humanitarian and developmental interests. The latter aim harmonizes with the ethical orientations in the American politics. However, this did not prevent the US from using foreign aid as a tool to pressure recipient countries or to punish them, if they adopt opposing policies.

American President Donald Trump has used foreign aid as a tool to punish countries that oppose the US’ foreign policy. Following the international campaign at the UN against him for recognizing Jerusalem as the capital of Israel on December 6 and announcing that the American embassy will be moved from Tel Aviv to Jerusalem, Trump threatened to decrease foreign aid to countries that oppose the US’ decision. In an attempt to pressure the Palestinian Authority to settle the Palestinian-Israeli conflict, the US Department of State said on January 16 that it would decrease its aid to the United Nations Relief and Works Agency for Palestine Refugees in the Near East (UNRWA).

American aid was mainly based on “moral conditions” as the American administrations’ traditional rhetoric always linked aid to the recipients’ adoption of internal reform, combating corruption and respecting human rights. However, this conditionality has often been doubted by many who said this is merely a negotiating method to serve other pragmatic interests.

Trump’s rise to power and his tendency to break free from political correctness reveal a new dimension in the American political rhetoric. This dimension adds a clear correlation between conditionality of aid and political pragmatism, i.e. it is a condition for the recipient to commit to American interests and support the priorities of the US foreign policy as it is. The US administration’s recent speeches, particularly its implicit threats to cut aid to countries, which backed the UN General Assembly’s vote that condemned the decision to move the US embassy to Jerusalem, confirms this. The US also took actual measures to suspend aid to Pakistan and Palestine during this month.

The region’s expectations in terms of American aid are based on the logic of realist conditionality, which in the case of the Trump administration is linked to America’s internal situation and strategy towards the region. This is represented in the following:

1. The slogan “America First”: The US administration’s threats and decisions to cut or downsize aid to regional countries cannot be separated from a general orientation to downsize foreign aid altogether. Trump who tends to have isolationist tendencies reflected this orientation during the presidential campaign. His statements clearly mentioned that the American budget will be based on the principle “America First.” He also frankly said that the new budget will limit foreign aid to address critical domestic priorities, putting America First, and decrease or end direct funding of international organizations that do not strengthen the interests of its foreign policy.

The draft budget specified 13 aims, which include: downsizing American funding to the UN, affiliate organizations and peacekeeping troops, suspending financial aid to climate change programs as approved by former President Barack Obama, suspending refugees’ aid programs, downsizing financial aid allocated for education exchange programs, and downsizing funds to international development banks. This is in addition to altering how the US provides military aid to some countries as instead of providing donations; they would provide loans to support purchase of American weapons. Overall, aid will mainly be provided to countries, which represent strategic significance to the US.

2. Populism of decisions and internal pressure: The American president is confronting difficulties due to the investigation into alleged Russian intervention in the 2016 presidential elections and its possible consequences. There are also polls, which showed that Trump’s approval rating is lower than any of his predecessors in one year. This is in addition to worries of conflicts within his administration.

It seems the American president is still in need of taking or hinting to take more populist measures that address nationalist Americans and others who are worried of economic pressures, as they think foreign aid represents 25 percent of federal expenditure when in fact it only represents about 1.3 percent.

According to previous general orientations, the new American national security strategy has taken the same approach towards the Middle East, as it confirmed that US aid would prioritize partners, which support American national interests.

America’s relations with Pakistan and Israel and its stance on the Palestinian cause represent a clear model of the American administration’s sharp stance in terms of its vision regarding its strategic interests and its national security beyond its borders. This exposes the considerations of abstract political realism, the principle of pragmatism and the administration’s right-wing ideology.

The administration’s decisions on January 4 and 16 to suspend security aid to Pakistan and freeze sending USD 65 million to UNRWA can be understood as such:

1. Punishing Pakistan for its dual roles: Islamabad has been an important ally of Washington in the war against terror ever since the US decided to invade Afghanistan in October 2001 and its efforts to topple the Taliban regime following the September 11, 2001 terror attacks. Pakistan received American aid worth billions of dollars in return. The US, however, often doubted Pakistan’s intentions to be a serious partner in this war as it played a dual role; it received aid, while supporting Taliban and the extremist Haqqani network. This did not help stabilizing the situation in Afghanistan. This is why the Obama administration froze USD 800 million worth of aid to Pakistan in 2011 and froze around USD 350 million in 2016.

The US then shifted towards adopting realistic policies that are more severe, unlike the “escalatory rhetoric,” which Trump used in his tweets when he said: "The United States has foolishly given Pakistan more than 33 billion dollars in aid over the last 15 years, and they have given us nothing but lies and deceit.” Accordingly, the American national security strategy followed the same logic and froze US aid to Pakistan as based on US political priorities in South and Central Asia. The framework of the strategy revealed that the US would rather expand its strategic partnership with India and giving it a leading role “across the wider region.” This seems to be happening at the expense of Islamabad, New Delhi’s historical enemy.

This strategy also voices the importance of pressuring Pakistan to intensify efforts to combat terrorism and prevent it from participating in any destabilizing practices. It also aims to make Pakistan understand that security and economic support is linked to taking decisive measures against armed and terrorist groups operating within its territories.

2. Israel first: The new American administration did not hide its bias to Israel against the Palestinians. This was seen before Trump even assumed his role as president on January 20, 2017 as he pledged to move the embassy to Jerusalem when he was still a presidential candidate. Trump recognized Jerusalem as Israel’s capital after he became president and he began the process of moving the embassy to Jerusalem. In December, the US then vetoed a UN resolution condemning the decision to move the embassy to Jerusalem. This is in addition to Trump’s and the US Ambassador to the UN Nikki Haley’s threats to cut aid to countries that will vote in favor of a similar resolution at the UN General Assembly.

On January 3, Trump threatened to cut aid to the Palestinian Authority. He tweeted: “We pay the Palestinians hundreds of millions of dollars a year…but with the Palestinians no longer willing to talk peace, why should we make any of these massive future payments to them?”

The new national security strategy clearly confirms the same logic as priority in the region has been given to the war on terrorism and confronting Iran. It denied that the Palestinian-Israeli conflict is a reason behind the region’s instability and said, “For generations the conflict between Israel and the Palestinians has been understood as the prime irritant preventing peace and prosperity in the region. Today, the threats from jihadist terrorist organizations and the threat from Iran are creating the realization that Israel is not the cause of the region’s problems.”

In brief, linking aid to the condition that recipients must directly and clearly serve US national interests and foreign policy represents a pragmatic behavior. However, according to the same logic, severe measures or overusing this as a tool against some countries may backfire and negatively affect American interests, as the punished countries may seek new realistic alliances with other parties that seek to expand their influence in the region and to deprive the US of relatively strategic ties.