How does Turkey manage its relations with Sudan and Qatar? 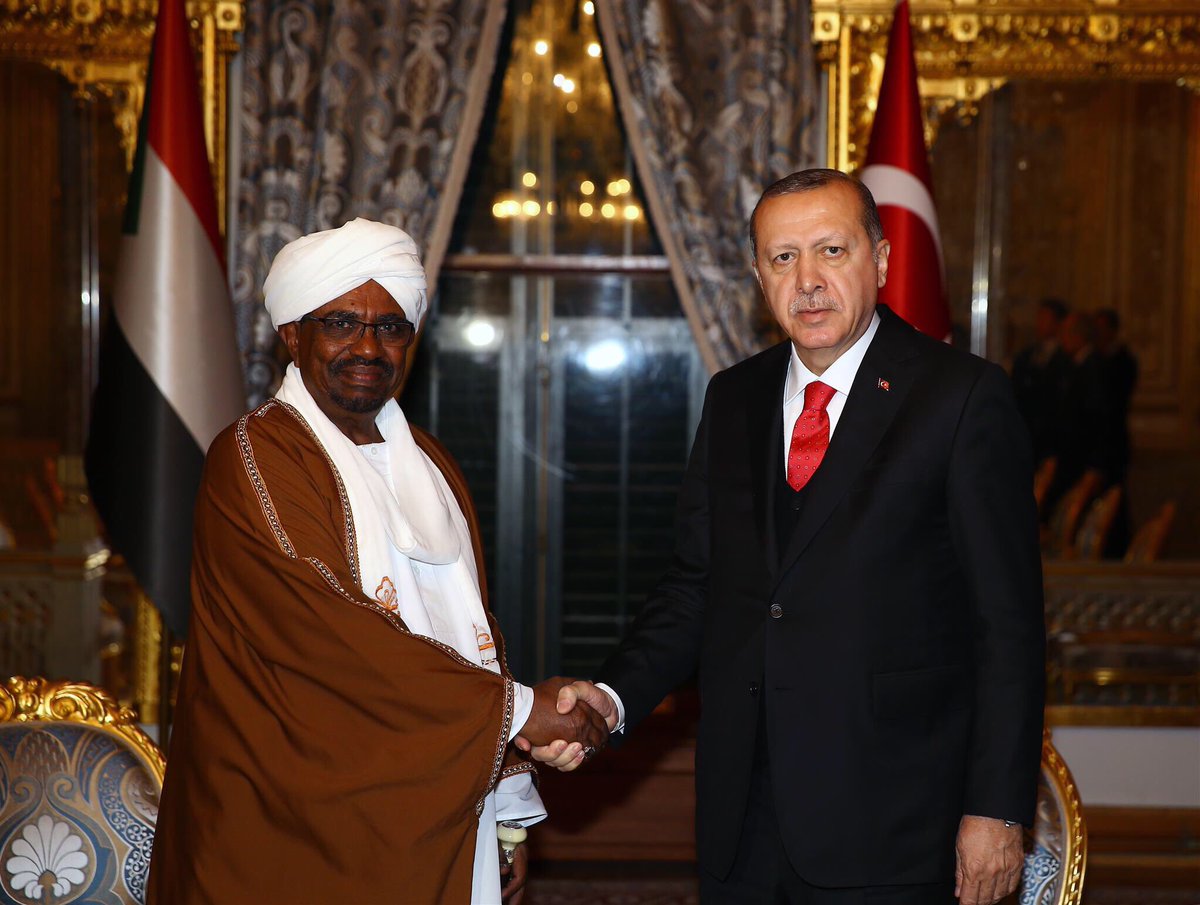 Seemingly, Sudan may turn into a convergence point for a new alliance or regional axis comprising Turkey and Qatar. This new axis may extend in the future to encompass Iran, given the political harmony between the latter, Turkey and Qatar, which may both seek to cement their relations with Sudan, following the efforts made by Doha to alienate Sudan from the Arab stability axis and send positive messages to Tehran, which Doha views as its regional backer.

The stated purpose of Erdogan’s visit to Sudan, Chad and Tunisia, from 24 to 27 December, was largely misleading, as it was veiled under economic banner, in particular investment, as he was accompanied by a majority economic delegation comprising 150 businessmen. It was meant to conceal the main objective, which is strategic in nature and not far from targeting the interests of the Arab stability axis, amid the convergence of policies of Ankara, Doha and Khartoum on several issues, primarily supporting extreme Islamic movements and forging new regional alliances.

The visit of the Turkish president Recep Tayyip Erdogan, which came in tandem with the visit of the Chief of Staff of Qatar Armed Forces Lieutenant General Ghanim bin Shaheen Al-Ghanim to Khartum and meeting with his Turkish and Sudanese counterparts, General Hulusi Akar and Lieutenant General Emad al-Din Mustafa Adawi, Turkey sought to achieve several key objectives, which are as follows:

1- Policy tug of war:  Turkey aims to blockade Arab states opposed to its expansionist project for regional hegemony by jumping into their traditional spheres of influence in their regional surroundings. Remarkably, Turkey seeks to bolster its presence in all countries and areas close to the boundaries of the Arab stability axis. Apart from Sudan and Chad, Turkey has influence in Libya and the Gaza Strip, through its support for terrorist and armed organizations, and is forging strong relations with both Jordan and Israel. Apparently, it is trying to achieve this by reinforcing its influence on the Red Sea and nearby global transport lines in Bab al-Mandeb and the Suez Canal.

2- Positioning on the Red sea: This is linked to the swift intervention of Ankara in the development and management of Suakin island and the conclusion of military and security cooperation agreements, including the establishment of naval dock for maintenance of civilian and military vessels, noting at the same time that such cooperation may evolve into more influential paths, as was evident in the remarks of the Sudanese Foreign Minister Ibrahim Ghandour, who said: “We have signed an agreement that could result in any kind of military cooperation between the two countries”.

Although Ankara has tried to suggest that the development of its military cooperation with Khartoum comes in the context of its concern over the security of Africa and the Red Sea, it does not negate its consistent pursuit to keep up with the Arab influence, both economic and military, in East Africa, especially since Turkey had opened its military base in Somalia on 30 September 2017.

Turkey and Sudan may have reached security understandings that were not announced during the visit, given Erdogan’s keenness not to disclose the details of some of the signed agreements. During an economic forum involving Turkish and Sudanese businessmen, and after announcing his request to allocate the administration of Suakin  for a certain time in order to redevelop it, he said that “there is an attachment I will not speak of now”.

3- Strengthen relations with Muslim Brotherhood-hosting states: It was remarkable that Erdogan’s tour included countries in which the terrorist Muslim Brotherhood has unmistakable influence. In Sudan, there has been a strong base for Muslim Brotherhood since President Omar al-Bashir came to power in 1989. Thus, one of the objectives of Erdogan’s tour is to prop up the terrorist movement and transfer its influence to new areas, such as North Africa and Sahel region, amid the strong pressure upon it in the Arab Mashreq region in recent years, because of the steps taken by Arab Stability axis.

The tour reveals several indications that Turkey supports the Muslim Brotherhood, one of which was Erdogan raising the four-finger salute known in Arabic as “Rabaa” during his visit to Sudan, in the presence of the Sudanese President Omar al-Bashir, which  indicates that Erdogan wants to lend Ankara’s support for the Brotherhood a formal and regional hue, and to send a message that the two regimes back the terrorist movement.

4- Reduce the pressures on Qatar: Turkey tries to achieve that by providing more extensive regional options to Doha, which is facing strong pressure from the Arab boycotting countries, due to its support for terrorism and interference in the internal affairs of the states of the region. In this regard, Turkey seeks to coordinate with Qatar to increase the level of military cooperation with Sudan.

Moreover, Erdogan’s tour came just a few days after Qatari Foreign Minister Mohamed bin Abdel Rahman al-Thani visited Tunisia on December 10. Ankara may also try to reach understandings between Chad and Qatar after the former, on August 23, 2017, closed its embassy in Doha after accusing the latter of destabilizing its stability out of Libya.

5. Exploit the preoccupation with Iran’s confrontation: Turkey is trying to take advantage of this issue to bolster its influence in new areas, especially after the widening gap between Iran and Arab countries due to Iran’s ongoing interventions in various regional crises, particularly in Syria, Lebanon, Yemen and Iraq. In addition, there is also the tense relations between Iran and the international powers concerned with the region’s crises, such as the U.S. and France, due to its missile program, regional interventions and the nuclear agreement.

6- Leverage its influence over Libya: This is being done through coordination with Qatar, Sudan and Chad, since the three countries have influence in Libya, for many considerations. It seems that Ankara attempt to start early preparations for the expected political developments in Libya in the next phase, amid increasing international efforts to reach a political settlement for the Libyan crisis.

7- Reinforce presence in the Sahel region: It is the region that causes a widespread concern, regionally and internationally, because of the increasing activities of terrorist organizations. This pushed many powers to take actions to combat them, as was evident in the resolutions of the Arab stability axis on December 13, 2017, by allocating $130 million for the G5 Sahel Joint Force to counter terrorist organizations during the international conference, held in Paris, to support the Joint Force. This marks the formation of two axes in the region: one to support stability, and another to fuel crises and spread chaos spearheaded by Turkey, Qatar and Iran.

8- Encircle Hizmet movement, especially in Chad. Ankara has been deliberately providing Chad with economic and investment incentives through signing cooperation agreements in several fields, such as investment protection, cooperation in arts and sport and oil exploration. The goal of these incentives is to spur Chad to end the activities of Hizmet movement on its territory, which was evident in the remarks of Chad’s President Idriss Deby, who said according to Turkish media: “Our schools are no longer in the hands of terrorists”, in a reference to Hizmet movement specifically.

Overall, it can be argued that Erdogan’s tour to Sudan, Chad and Tunisia marks a new stage of Turkish diplomatic, military and economic moves in new regions, far from the traditional conflict zones of the Fertile Crescent and the Arab Mashreq in general. This means that Turkey pursues a new regional role after its diminished influence in these regions, having lost its bet on the collapse of the Syrian regime and the rise of terrorist and armed organizations to power, as well as the fall of ISIS and strained relations with the U.S. This coincides with aggravating crises at home fueled by Erdogan’s policies, who is trying to play the role of the Ottoman caliph.