Why did Qatar Breach the Gulf Agreements? 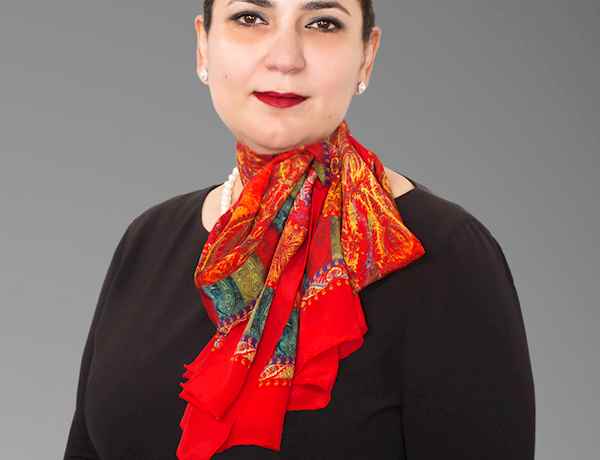 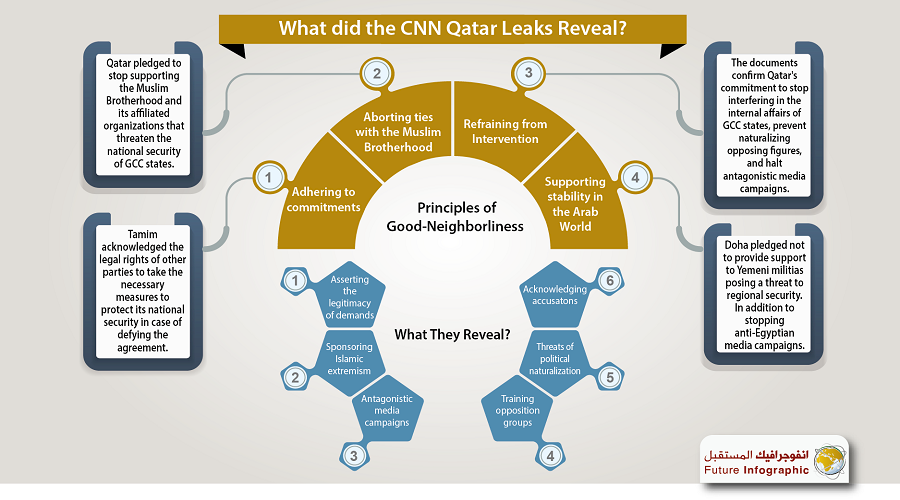 CNN recently published the content of agreements signed between Gulf Cooperation Council countries and Qatar in 2013 and 2014. Although the agreements’ content has been well-known and many of its articles have been highlighted during the past few years, publishing the content of the supplemental documents revealed the clarity of Gulf countries’ demands to Qatar and showed that the latter has stayed the same until now and violated all its pledges. In addition to these legal commitments, there is the moral aspect of the agreements which is represented in respecting the signature of Gulf leaders within a political, cultural and social environment that greatly respects personal credibility and keeps one’s word and promises. All this raises suspicions that go beyond the motives  of Qatari behavior’s which are directing Doha's choices, moves and political stances.

The documents published by CNN show, beyond any doubt, that the 2013 Riyadh agreement and its executive mechanism and the 2014 Riyadh supplementary agreement signed between the five GCC countries and Qatar included the same demands which the boycotting countries made last month. They also show that all GCC countries had the same fears towards Qatar and that the stance towards it has been shared as they only disagreed over the extent of some demands and not over the demands themselves.

Qatar’s behavior after it signed these agreements clearly shows that Doha has been only seeking to gain time and maneuver. Perhaps, it thought it will not be held accountable if it violated the pledges it made in 2013, and that violating them will only be limited to signing another agreement, like what happened in 2014 after the withdrawal of envoys. Therefore, it believed that adopting the same approach in any upcoming round will not cost it more than signing another agreement it can evade later.

It’s important to note that the last item in the supplementary agreement signed in 2014 stated the following: “In the case this mechanism is violated, the rest of the GCC countries can take the measures they deem appropriate to protect their security and stability.” This item shows that the recent Saudi, Emirati and Bahraini decision to cut ties with Qatar only activated the agreement’s items. Publishing the agreement’s content had direct results as many media outlets and social media users understood the boycotting countries’ stance better, became more accepting of it and comprehended the extent of the recent measures. Many who were neutral or confused or doubtful became in support of the recent measures and realized the latter’s legal and moral basis.

Second: Examples of Breaching their Pledges

One does not need to thoroughly examine the situation to realize that Doha has not altered its policies and behavior and that it resumed doing everything it pledged it will not do at a faster and worse pace. Here are some examples that confirm this:

The documents clearly stated Qatar’s commitment not to financially or morally support organizations which threaten the security or stability of GCC countries and which are present in Yemen, Syria and other countries. However, Qatar’s behavior since signing the agreement in 2013 shows that Doha has done otherwise. For example, Qatar funded the Ahrar al-Sham organization in Syria. There is also plenty of evidence that Qatar provided direct support to al-Nusra Front. Qatari intelligence officials held several meetings with al-Nusra Front leaders to “embellish their reputation” and rehabilitate them by convincing them to declare their separation from al-Qaeda in exchange for financial support and armament. It seems the organization responded to this request in what seemed like a maneuver to continue to exist. The organization thus changed its name to Jabhat Fateh al-Sham and dissociated itself from al-Qaeda.

Qatar also resorted to funding terrorist organizations by “paying ransoms.” Within this context, the Financial Times daily reported that Qatar paid around USD 1 billion of which USD 400 million went to Iran to liberate 26 members of the Qatari royal family after they were abducted in South Iraq while on a hunting trip. The daily added that Qatar made this payment in April to the two of the worst blacklisted parties in the Middle East: al-Qaeda organization wing which is now fighting in Syria and Iranian security officials. Serious questions have been asked about the incident with many raising doubts whether members of the royal family have been in fact abducted. It’s legitimate to ask questions like: How do members of the Qatari royal family go to Iraq knowing the country’s situation? Such questions lead to the possibility that the entire operation was just a plan to give money to terrorist groups with links to Iran.

A document issued by the US Department of State that was leaked by WikiLeaks revealed that Taliban, al-Qaeda and other terrorist organizations are using channels in Qatar to attain funding and that although the Qatari government has the capabilities to suspend this funding, it hasn’t. Some international reports also documented Qatar’s practices in supporting and funding terrorism.

A report by the Stockholm International Peace Research Institute showed that Qatar exported around 2.6 million weapons worth $100 billion to conflict zones. A study by the Foundation for Defense of Democracies confirmed that Qatar transferred around $1.5 million to al-Qaeda’s armed members in Iraq and $375,000 to the organization’s branch in Syria.

2. Close Ties with the Muslim Brotherhood

The agreement’s items clearly stated that Qatar must not provide financial and media support to the Muslim Brotherhood whether inside the GCC or outside it. However Doha did the opposite. Close relations between Doha and the Brotherhood have been on for years now, and they’ve exited long before the eruption of the so called “Arab Spring”. Qatar’s former Emir Sheikh Hamad bin Khalifa was and remains close to Yusuf al-Qaradawi, the Brotherhood leader whom Qatar has embraced since 1961. Qatar also opened Al-Jazeera’s doors for him and for other Brotherhood figures to express their opinions.

Qatar also provided support to many Brotherhood members after the June 30, 2013 revolution in Egypt and after Egyptian President Mohammed Mursi was ousted. It hosted them in Doha and gave them media platforms to attack the Egyptian authorities. And most recently, within the context of the current crisis, Qatar’s Foreign Minister Sheikh Mohammed bin Abdulrahman Al Thani continued to defend the Muslim Brotherhood and said on July 6 in a CNN interview: “In Qatar, The Muslim Brotherhood is not designated as a terrorist organization”

The agreement’s items included commitments that state-owned television channels or television channels that are directly or indirectly supported by any state must not tackle subjects which harm any of the GCC countries. However, Qatar used Al-Jazeera channels and some news websites it funds like Arabi21, Rassd, The New Arab, The New Khalij, The HuffPost Arabi and others to market policies that threaten the interests and security of Gulf countries and other countries in the region. This was a major reason behind the current Qatar crisis.

Al-Jazeera channels and these media platforms have been keen over the past few years to make room for terrorist leaders to propagate terrorist ideas, and present their opinions to the Arab public opinion. They also published false reports and news about the developments which some Arab and Gulf countries witnessed. Therefore, Doha turned these media platforms into tools to incite, support chaos and destruction, infiltrate Gulf unity and harm these countries’ leaders.

Qatar’s behavior and practices raise questions about the motives behind its adoption of hostile policies against Gulf countries. Some analysts attributed Qatar’s behavior and foreign policies to some “complexes” which Qatar suffer from, such as complexes pertaining to the country’s small area or fears from the bigger neighboring countries or “bloodless coup.” The hostile stance which is deep-rooted in the mentality of former Qatari Emir Sheikh Hamad bin Khalifa and Emir Tamim is due to some GCC countries’ discomfort of the coup which Sheikh Hamad staged against his father Sheikh Khalifa. Some analysts have called this “the bloodless coup complex.” Qatar’s emir, Tamim, did not only stage a coup against his father but he also abandoned policies which greatly supported Gulf’s unity. Ever since, Qatar has adopted practices that threaten the security of Arab and Gulf countries.

Meanwhile, Qatar still suffered from a complex pertaining to its area which is small compared with neighboring countries, particularly with Saudi Arabia. This controlled Qatar’s behavior as it used its massive revenues which it gained from its natural gas reserves to overcome this complex. Doha began to play foreign roles that do not harmonize with its size. This explains its continuous attempts to play international roles by mediating in several affairs, such as playing a part in the reconciliation between Palestinian factions (Fatah and Hamas), in the negotiations between the Yemeni government and Houthi rebels between 2003 and 2009 and in the conflict in Sudan.

These complexes all emerged when the 2017 Riyadh summits were held. Qatar’s hidden anger emerged due to these summits’ success in the presence of American President Donald Trump and the leaders of 50 Arab and Islamic countries, and due to reaching agreements to coordinate stances to combat terrorism in the region. What also revealed this anger is the US pledges to stand by Gulf countries against Iran’s threats. Doha’s implicit rejection of the Riyadh summits’ results reflected Qatar’s intentions to compete with Saudi Arabia’s status and influence in the Middle East and to contradict its visions regarding many of the region’s affairs. Qatar has always sought to hide this.

Finally, Qatar’s behavior reached a point where it’s difficult to overlook it or let it pass similar to what happened in the past. Considerations to maintain Gulf unity, not escalate matters and work calmly to resolve disputes have retreated in favor of other factors. These factors include stopping threats, confronting plans to nurture chaos and instability in Gulf and Arab countries and deterring attempts to divide people and ally with regional powers that seek to destabilize the GCC. The boycotting countries seem willing to resume the path they have taken since the beginning of June 2017. They seem willing to escalate measures if no real and tangible change are seen in the Qatari behavior as they want to adopt practical steps and clear restrictions and mechanisms to verify Doha’s future commitment to its past pledges.