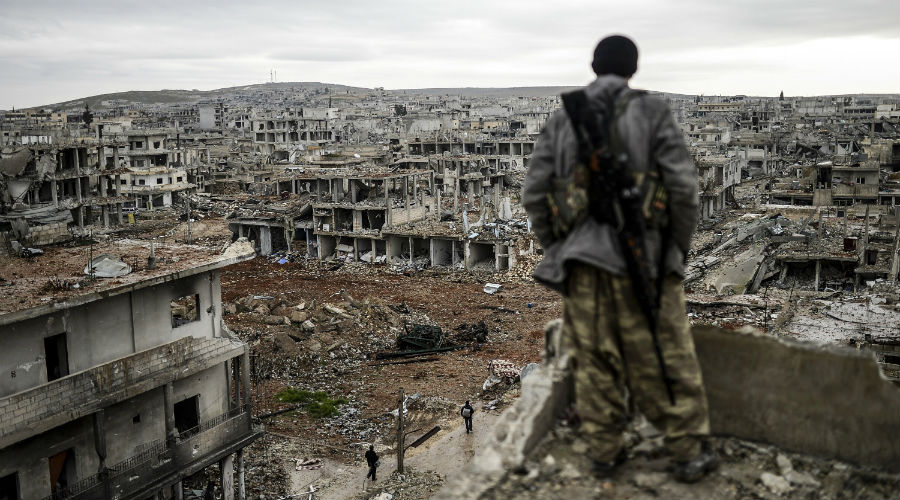 ISIS has deliberately destroyed the infrastructure of Iraqi and Syrian cities as a high-impact tool to widen the economic and political losses of their foes, including the Iraqi army, the Syrian regime army, and allied militias, or defensive means to prevent their advance and achieve victories on the ground as Iraqi and Syrian cities are liberated.

In this regard, battles to free cities from the grip of ISIS revealed the extent of the destruction in Syria as well as Iraq’s Ramadi, Anbar, and Mosul (for which the battle is currently underway): ISIS pursued what is referred to as a scorched earth policy, aiming to systematically destroy economic assets, whether those be oil wells, airports, military bases, residential buildings, and so on.

This policy will achieve two main goals for the organization: first, it helps postpone the resolution of the battle in the favor of Iraqi and Syrian forces and allows ISIS to, at the very least, utilize this policy cover for a safe withdrawal. The second includes exacerbating the economic losses incurred by their enemies.

But the implications of this policy may lead to, on the other hand, future negative impacts on the security, financial, and environmental levels, hampering the reconstruction of cities liberated from ISIS and simultaneously warning of the great difficulties associated with reintegrating the displaced population in liberated territories.

The most notable models where ISIS sought to implement a scorched earth policy include:

1. Oil and gas wells: Targeting and destroying oil infrastructure before losing control is one of the clearest patterns which comprises ISIS’ scorched earth policy, revealing itself in 2015 and 2016 when the group bombed a number of natural gas wells in the Sha’er field in the western portion of the Syrian city of Palmyra in addition to setting fire to a major gas station linked to the fields, after Syrian regime forces came close to storming the city. On the other hand, ISIS also torched 11 wells in the Al-Qayyarah Field south of Mosul in August 2016 before liberating it.

Through this, ISIS hopes to achieve two goals: The first relates to avoiding air traffic by launching intensive smoke from burning oil, while the second involves preventing their enemies from utilizing the wells; burning them may lengthen the rehabilitation process by several months. In order to ensure the same results, ISIS deliberately set fires at several remaining oil wells under their control in the ongoing battle of Mosul. The city has not yet been liberated.

2. Agricultural lands: ISIS aims to destroy and raze agricultural lands in the provinces of Kirkuk and Nineveh in Iraq. They lit fires upon leaving the cities and simultaneously used dams located along the Euphrates which were controlled in 2014 to flood several agricultural areas with water. ISIS also set fire to agricultural land and civilian homes along the outskirts of the Al-Bil village in the countryside of Aleppo after the area was defeated in June 2015.

3. Various buildings: Armed conflicts in areas under ISIS control in Iraq and Syria resulted in the widespread destruction of facilities of various types. In Ramadi and its environs, one of the Iraqi cities which were liberated in 2016, approximately 5700 buildings suffered varying levels of damage inflicted since mid-2014, including nearly 2000 buildings which were found to have been entirely destroyed according to the United Nations. The city of Tikrit was also liberated, and reports indicate that ISIS destroyed half of government buildings there before the city was freed in March 2015.

Apart from targeting Iraqi residential or government facilities, it appears that ISIS is currently pushing to destroy the buildings utilized as their financial and administrative headquarters in Iraqi cities in order to undermine local and international efforts to collect physical evidence that may reveal information about the organization. This may be the reason that ISIS recently destroyed Nineveh's Oberoi hotel which was used as a headquarters for the group’s leadership in 2014.

4. Military facilities: In addition to targeting civilian facilities, ISIS has sabotaged the military installations it has taken over since 2014. One of the most important such facilities includes the Al Qayyarah Air Base: Iraqi military reports showed that the base had been subjected to significant damage after Iraqi forces regained control in August 2016.

5. Planting mines: ISIS has also expanded military tactics such as planting landmines to prevent their enemies from advancing. The danger inherent in the spread of these mines has threatened lives in the area and hindered reconstruction and development in areas where the mines have yet to be completely removed.

Across Palmyra, which ISIS was expelled from in March 2016, approximately 3,000 land mines were planted as indicated by the Syrian regime army. Some witnesses also claim that ISIS randomly planted land mines throughout the countryside of Aleppo, both in agricultural land and various roads, rendering those lands unsuitable for cultivation. Regarding Iraq, one of the main obstacles to Iraqi and international coalition forces' making progress on recovering the city involves the random spread of mines across the city and neighboring villages.

The aforementioned factors have imposed additional burdens on the process of rehabilitating liberated Iraqi and Syrian cities from the control of ISIS, which can be addressed as follows:

1. Providing safety: Without a doubt, the scorched earth policy may impede, to a limited degree, the advance of military forces to fight ISIS in the short-term, while in the long-term this will require more effort to recover and achieve security stability before the stage of rebuilding begins.

There is no dispute that the development and residential vacuum currently found in recently-liberated Iraqi and Syrian cities may represent a chance for terrorist outposts and pockets to spread once more. International efforts are also expected to expel ISIS fighters from Iraq, who will then move toward Syria, which may be followed by a resurgence of ISIS fighters in the latter. This increased presence outside of Iraq is linked to the dangers faced by the group there including lightning attacks, widespread bombings, and land mines, with removal costs reaching $1000 maximum or 13 times the production cost according to some estimates.

Additionally, expelling ISIS may also not be sufficient to restore security and political stability to these areas without first establishing a participatory form of governance based on representation from various religious and ethnic groups such as the Arabs, Kurds, Yazidis, Turkmen, and so on.

2. Mobilizing financing: Pursuing a scorched earth policy imposes additional financial burdens on the deteriorating economy in both Syria and Iraq where it is already difficult to find the amount of money required to rehabilitate liberated cities. Until now, Iraqi estimations indicate that the cost of rebuilding liberated Iraqi cities will reach approximately $40bn; this figure may grow further according to future estimates for the Nineveh province. The amounts received by Iraqis so far for these purposes have only reached to $2.2bn. Regarding Syria, the nature of the situation there has created a much higher cost of reconstruction, estimated to be approximately $180bn by the UN so far. Despite the positive signs shown by some international forces and institutions participating in efforts to rebuild cities liberated from ISIS, it appears that the economic difficulties faced by major economies in the region alike may hinder, in relative terms, the flow of reconstruction funds.

3. Addressing environmental problems: This policy requires addressing environmental losses. The deliberate destruction of cities has led to widespread air and water pollution in Iraq and Syria, which has upset the ecological balance and caused damage to healthy populations. At the end of October 2016, the UN announced that environmental damage was recorded during the operation to recover Mosul. ISIS set fire to a series of Mishraq Sulfur factories and went on to set fire to 19 oil wells near Mosul so far, launching poisonous gas into the air such as sulfur dioxide and sulfide hydrogen.

This is in addition to the ISIS attacks of August 2015 which employed mustard gas in the city of Aleppo. The attack bore widespread environmental and health impacts according to the results obtained by the Joint Investigative Mechanism of the UN formed by UN Security Council Resolution 2235 of the year 2015. Also in this context, ISIS's advance also included pumping quantities of oil from the Al Qayyarah fields in order to destroy the floating military bridge built by the Iraqi army in the Tigris River, causing widespread river pollution.

4. Population reintegration: Of course, this resulted in an escalation of the conflict with terrorist organizations such as ISIS displacing a large proportion of the population alongside a growing number of refugees abroad. According to UN estimates, the the number of internally displaced persons in Syria by the end of 2015 grew to 6.6m, while the same figure was 4.4m for Iraq. These numbers are likely to grow after the battle of Mosul, where the UN expects one million of a total of 1.5 million in the city to be displaced due to efforts to liberate it.

After taking the previously mentioned dilemmas into consideration, the Syrian and Iraqi governments are facing major difficulties in reintegrating the population in an environment that remains characterized by security, economic, and political fragility. At the very least, the two governments must provide the basic services which are urgently needed in the liberated cities that remain the most cohesive in security and economic terms.

Finally, it can be said that the scorched earth policy may hinder, to some extent, the process of reconstruction in both Syria and Iraq, which may consequently create a favorable environment for restoring some of the influence ISIS lost in certain areas this year. This in turn means that the powers involved in the fight against ISIS must move quickly to contain the negative implications produced by the deliberate destruction of infrastructure in areas under their control in order to fortify these locations against a new return for ISIS.