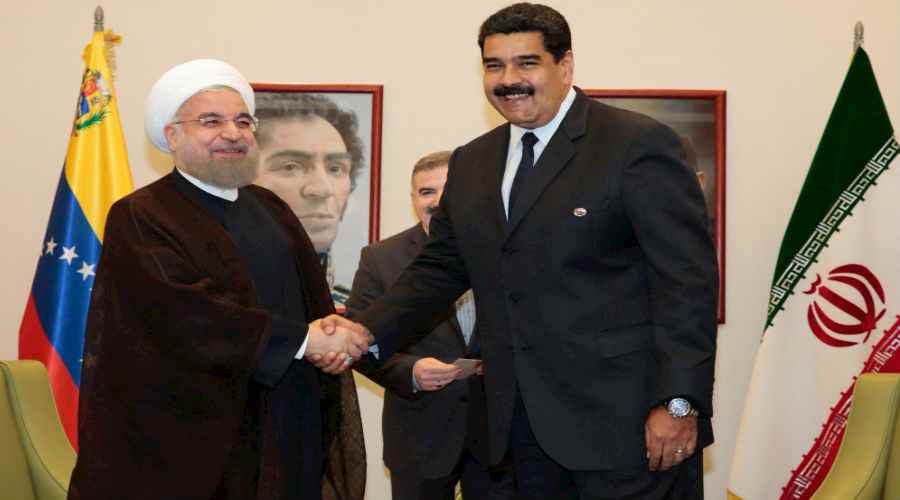 Iran was quick to support President Nicolas Maduro's regime, rejecting any attempt to take over power unlawfully, and at the same time considering the U.S. position on the Venezuelan crisis as a direct interference in its internal affairs. It has even instructed its allied militias, like Hezbollah, to adopt a similar position on the crisis in Caracas. In fact, this concern can be explained in light of three main considerations:

1 - International ally: Iran believes that Venezuela is an important ally especially with regard to the latter’s attempts to form a Latino alliance against American policy, as evident in the Iranian support for the establishment of Venezuela and Cuba for the so-called "Alliance Bolivarian" in 2004, which adopted policies hostile to the United States of America, and announced support for some issues of particular interest by Iran, similar to the crisis of its nuclear program and the conflict in Syria.

Specifically, Venezuela has already adopted similar positions. For example, the latter, along with veto-wielding Russia, rejected the draft resolution submitted by France and Spain to the Security Council on October 8, 2016, calling for a halt to the bombing in Aleppo, while agreeing to the Moscow draft that has not received support within the Council.

Here, Iran does not exclude that some of the growing differences between the United States and Venezuela are linked to the influence it sought to establish in Latin America through the Caracas gateway, evident in the successive warnings by some US officials of the effects of Iran-Venezuela relations. Therefore, some Iranian officials considered that the American position had a prominent role in the ongoing developments in Venezuela, reflected in the remarks of Special Assistant to the Speaker of the Shura Council for International Affairs Hussein Amir Abdullahian, in which he said that President  Trump insists on encouraging chaos and civil war through intervention and exploitation of the internal situation in Venezuela.

At the same time, Iran has begun contacts with some countries seeking to mediate a political settlement, such as Mexico and Uruguay, on the grounds that this could help to contain the chances of the crisis heading towards paths that are not in line with its interests.

2 - Enhancing pressure: Many trends in Iran see any possible political change in Venezuela means weakening the so-called "axis of objection" in which it participates internationally, in a manner that will contribute to reducing its ability to face the strong pressure imposed by the US against it, because of escalating differences over the roles it plays within the crisis states, along with the nuclear agreement and the missile program.

These developments coincide with the widening tension in the relations between Iran and European countries against the backdrop of the recent sanctions imposed on the former because of its attempts to carry out terrorist operations within its territory aimed at some elements of the Iranian opposition forces. These tensions are also concurrent with the keenness of both parties to activate the mechanism of special purpose vehicle through which they can be allowing trade under  U.S. sanctions.

In other words, Iran believes that a change in the Maduro regime, if it occurs, will increase the impact of the international isolation it experiences, after the expanding area of ​​widening disparities between it and some of the regional and international powers that had previously supported it, has begun to affect its position on American pressure.

3 - Internal fears: The Iranian regime does not appear to rule out the possibility of repeating the same crisis in Tehran. Although its officials have confirmed its ability to deal with what they call "threats" that have reached Iranian territory, this does not preclude that it has recently begun to focus on pressing charges against parties at home in coordination with external forces to undermine the foundations.

Although these allegations were intended to reduce the importance and impact of internal protests and strengthen the ability of the authorities to contain them, by launching an internal campaign claiming that these protests are fabricated to respond to what the regime is doing abroad. Nonetheless, this does not exclude that the regime may be expecting that the influence of the opposition forces or the role of the "street" could escalate in the next stage, in a manner that could threaten its already 'effective' existence in power.

There is no doubt that the incentives that could be pushing in the direction of this scenario are strong, such as the failure of the government to contain the repercussions of the economic crisis and is likely to worsen in the coming period in light of US sanctions and the nearing of the deadline granted by Washington for some countries to import Iranian oil.

The protests of teachers and workers of some factories have recently increased, indicating that Iran may be on the verge of a new phase of escalation between the regime and the street. The regime anticipates it  and knows that it will receive special attention from international powers, especially after some opposition groups managed to attract the attention of those forces to the domestic practices carried out by the regime.

In conclusion, it can be said that Iran will continue to conduct a thorough review of what is happening inside Venezuela, on the grounds that the possible paths to which the developments that the latter witnesses will affect, to a degree, both its position on US policy and the expected domestic escalation in the next stage.