What Does Iran’s Absence from the Istanbul Quartet Summit Mean? 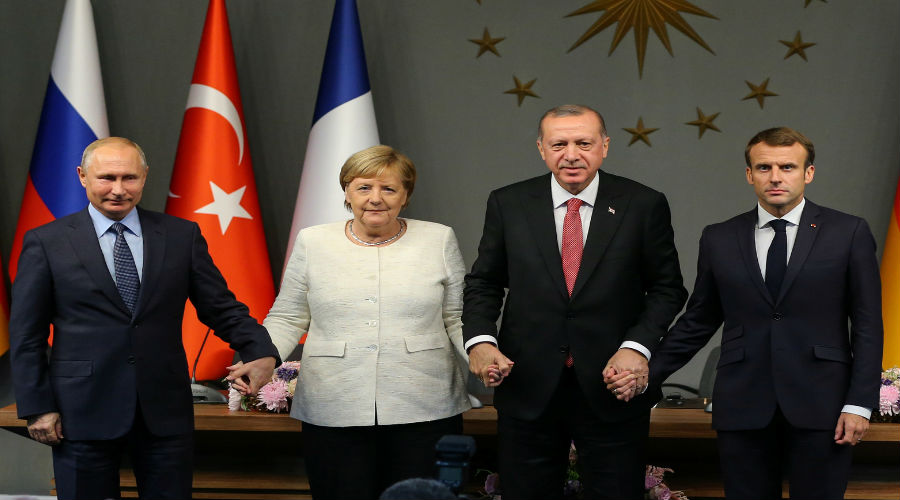 Although most of the parties concerned with developments in the Syrian conflict do not expect the Quartet Summit held today in Istanbul -with the participation of Turkish President Recep Tayyip Erdogan, Russian president Vladimir Putin, French president Emmanuel Macron and German Chancellor Angela Merkel- to make a breakthrough in the efforts to reach a political settlement of the crisis, this in its entirety does not diminish the anxiety of Iran, which is the most prominent absent at that summit.

Remarkably, Iranian estimates have linked the exclusion of Tehran from participation at the summit with the ongoing escalation with the US due to sanctions and withdrawal from the nuclear deal, as well as the differences that gradually widened with European countries, which face a critical stance between their willingness to keep the nuclear agreement and Iran’s insistence on its policies, both nuclear and regional, in a way that would weaken the prospect of this being achieved in the end.

Many estimates argue that Iran’s absence from the summit may be justified by the fact that it is represented with two countries, Russia and Turkey, with which it participates in the Astana talks, to be resumed in November or December 2018. Yet, this does not negate the that Tehran is concerned that this step may be a prelude to moving toward, rolling back its influence in Syria and weakening its presence in the process of drafting political and security arrangements. Its absence from the summit has many implications, the most important of which are:

1- Negative role: the fact that Iran was not invited to attend the summit suggests that the stance of some regional and international powers, which view Iran as “part of the problem, not the solution in Syria”, is gaining momentum, especially as the Summit agenda is not only limited to discussing the situation in Idlib, but also to debate how to push the political process forward, especially forming the constitutional commission, which some parties accuse the Syrian regime of disrupting it with the aim of controlling it. This means that the participating states preferred not to involve Iran lest it obstructs talks on a political process that is not to its liking.

2- Success of US pressures: It is evident that the US administration has succeeded in altering the equation of escalation with Iran, by ensuring that it is not confined only to the nuclear deal, but rather it extends to include its regional role, especially in crisis-ridden countries.

The US administration has begun to promote intensively that this role is one of the root causes that exacerbated these crises and their negative repercussions, particularly the influx of refugees into Western countries and the terrorist operations that hit their capitals.

It was striking that the US moves were concomitant with the insistence of US officials on setting a new goal for the US forces in Syria, which is to confront the Iranian military influence there, along with the stated and essential goal of preventing ISIS from returning to its previously controlled areas.

As such, the US may ramp up its campaign in the coming period, with the approach of the second batch of its sanctions on November 4, 2018. The US counts on the coming batch, which targets oil exports, to double down the pressure on Iran to force it to change its policy and accept new negotiations to reach a broader agreement that accommodates US reservations to the current nuclear deal.

3- Widening rift with European countries: These countries are making strenuous efforts to keep the nuclear deal alive, through numerous mechanisms that attempt to persuade European companies, especially small ones, to continue their dealings in the Iranian market, such as activating the so-called “blocking statute” to avoid the repercussions of US sanctions.

However, these countries are showing clear dissatisfaction with Iran’s reactions. In parallel with these efforts, which have caused considerable tension in their relations with the US, Iran continues its provocative activities, threatening to withdraw from the deal, resuming the nuclear program, and developing its missile program, as well as its continued interference in the internal affairs of regional countries, especially Syria and Yemen.

More than one European country has expressed its desire to reach a new agreement with Iran that includes broader commitments than those provided for in the current nuclear deal, in a way that limits the ramifications of Iran’s nuclear, missile and regional activities.

It is also remarkable that European countries have come to adopt a relatively close stance to that of the US on the political and security arrangements in Syria, as evident in France’s willingness to coordinate with the US before the participation of President Macron in the Istanbul Summit, which means the US is also present at the summit, albeit indirectly, through its constant understandings with some of the parties involved.

4- Understandings of “friends”: Iran does not conceal its discontentment at the willingness of some of the powers with which it has strong relations, especially Russia and Turkey, to reach political and security understandings with its opponents in Syria. This resentment grew stronger as the two countries succeeded in reaching a settlement on the situation in Idlib during the Sochi summit that brought together Turkish President Tayyip Erdogan and Russian Vladimir Putin on September 17, 2018.

Iran’s fears are likely to deepen in the coming period, with the growing prospects for holding new talks on the political process in accordance with United Nations resolutions, which will of course undercut the Iranian position on the arrangements pertaining to the Syrian conflict.

Accordingly, Iran may make new escalatory and provocative moves in Syria during the next period, not only to send regional messages to the US in parallel with the second batch of US sanctions, but also to prove that it is a party that cannot be excluded from the process of drafting security and political arrangements in war torn country. If this is to happen, it will most likely widen its rift with the powers concerned with the developments of the Syrian conflict, including those with which Iran are keen to establish strong relations to mitigate other significant dossiers.