How US Institutions will Implement the Withdrawal from the Nuclear Deal 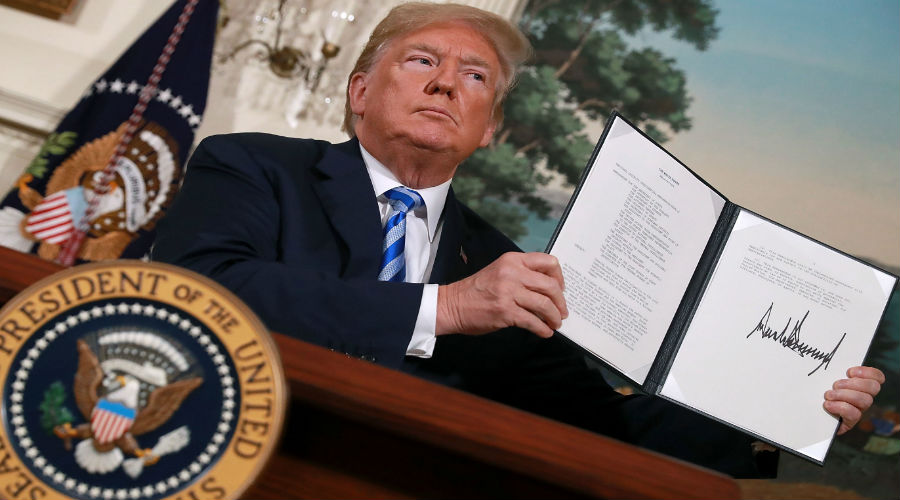 Donald Trump’s announcement of the US withdrawal from the Iran nuclear deal, on May 8, 2018, marks the beginning of a series of actions and steps to be implemented by the American institutions in accordance with the presidential decision. That includes necessary steps that should be taken by the National Security Council, Departments of State, Treasury and Defense to implement tougher economic sanctions on Iran and any state that assists Iran in its efforts to acquire nuclear weapons. In this regard, the Congress will attempt to push for developing a clear and comprehensive strategy towards Iran.

Reasons for the decision

Based on the context of Trump’s stance regarding the agreement in general, one can argue that the reasons, from the US’ perspective, include the following:

1- President Trump’s adopted an anti-agreement stance, whether during his campaign, or after assuming office. He views the deal as a “disastrous”, as it has neither preserved the security of the US, nor prevented Iran from continuing its nuclear activities.

2- President Trump perceives the nuclear agreement as flawed, as it has not addressed other issues related to Iran. The deal didn’t address Iran’s support to terrorism; whether its role and subversive activities in the Middle East, specifically in Yemen and Syria, or its ballistic missile program. Furthermore, it did not include a clear mechanism for monitoring, follow-up and verification of Iran’s activities, and punishment in the event of a breach of the terms of the agreement.

3- Trump’s administration has tried to renegotiate the terms of the nuclear deal with Iran. In the past weeks, it negotiated with European allies and Iran, in order to reach a supplementary agreement, to ensure rectifying the drawbacks perceived by the administration in the agreement. However, these negotiations have fell flat due to the Iranian intransigence. This failure led to the announcement of the US withdrawal from the agreement.

4- Despite President Trump’s announcement of his withdrawal from the agreement, he left the door open for the negotiation of a new deal. In his speech, he stressed that “Iran’s leaders will naturally say that they refuse to negotiate a new deal; they refuse. And that’s fine. I’d probably say the same thing if I was in their position. But the fact is they are going to want to make a new and lasting deal, one that benefits all of Iran and the Iranian people. When they do, I am ready, willing, and able.” This means that if the Iranian regime is willing to negotiate again, the Trump administration will work to reach a new agreement.

5- One of the reasons behind President Trump’s decision is to assert that he is delivering on the promises he made during the elections campaign, in addition to his attempt to detract from President Obama’s legacy, since the nuclear deal with Iran is one of the key achievements of Obama during his second term.

The implementation of Trump’s decision will have implication on the obligations of the American party, as a signatory of the deal, as well as the commitments and interactions between Iran and the other signatory states.

Accordingly, there are several considerations related to the US withdrawal including the following:

1- The announcement of the US withdrawal from the nuclear deal does not mean the treaty’s termination. This agreement was signed between Iran and the group of six international powers: the US, Britain, Russia, China, France, and Germany. Since Iran and the rest of the five countries have declared their commitment to the agreement, the withdrawal of the US does not completely terminate it. However, the withdrawal undermines the treaty’s effectiveness and obliges other parties to seek alternatives.

2- The agreement allowed the International Atomic Energy Agency (IAEA) to oversee and monitor Iran’s nuclear program, and since the signing of the agreement, the IAEA officials paid several visits to the sites of this program, which have been agreed upon, to verify Iran’s commitments to the execution of the agreement, and the IAEA has asserted its commitment. In light of the US withdrawal from the agreement, Iran may resort to higher levels of uranium enrichment. If Iran does so, it will be a mere challenge to the IAEA’s role and the main objective of the agreement to limit Iran’s ability to acquire nuclear weapons will no longer be possible.

3- President Trump’s announcement entailed re-imposing sanctions on. It is known that the mechanism for imposing sanctions and verifying their application takes a long time. In this regard, the US Treasury announced that it would apply these sanctions within 90 to 180 days, which means that the execution and implementation of President Trump’s decision will take a relatively long period, and will not be imposed immediately.

4- The decision also noted that sanctions would be imposed on any state that assists Iran in its pursuit of acquiring nuclear weapons, which means that Trump’s administration will expand sanctions to include Iran’s collaborators in its nuclear program. This would raise many questions about the mechanism that the US could adopt to impose sanctions on countries or companies that could assist Iran in its nuclear program.

Role of the US institutions

Being part of the executive branch, the American institutions have provided various alternatives to President Trump, to support him in the decision-making process. Such alternatives the ongoing debate among informal institutions about possible options to deal with Iran’s nuclear deal. Their various opinions are as follows:

1- National Security Council: The US National Security Council is one of the agencies that supports the office of the President. In this regard, the national Security Adviser, Ambassador John Bolton, has worked to offer all the alternatives to President Trump that would suit his stance. According to US media, the Council has provided several alternatives, whether to take the decision to re-impose sanctions, proceed with the current nuclear agreement, or extend the timeframe of the agreement. Apart from the information provided by the media, there is no detailed information provided about what was presented precisely to President Trump. However, as per Bolton’s position on Iran, who adopts a hawkish stance toward Tehran, it is likely that the council has advised the president to pull out of the deal. The National Security Advisor held a press conference following the announcement of the presidential decision explaining the various dimensions and aspects of the decision, as a part of a public relations strategy undertaken by the administration to promote the presidential decision for the public opinion at home.

2- Vice-President: Mike Pence, the US vice-president, held consultations with the Congress to pave the way for the president’s announcement to withdraw from the agreement. During these consultations, the vice president has tried to present the administration’s position and lay the groundwork for it, with both the Senate and House of Representatives. The reasons behind making this move were the strong opposition from the Democrats and the limited of Republicans in Congress, against withdrawal from the agreement.

3- Informal institutions: In parallel, the media, academia, and think tanks were preoccupied with a debate on how to address the deal. There were two opposing camps, the first one supports the agreement and rejects the US withdrawal. Editorials of major newspapers such as the New York Times and the Washington Post have defended the agreement. It was remarkable that the supporters of the agreement on the American scene focused their criticisms on the President’s lack of a backup or strategic plan in dealing with the post-withdrawal phase of the nuclear agreement. On the other hand, there were those who support President Trump in pulling out of the deal. This view was expressed by analysts with conservative orientations including Fox News and the Washington Times.

Following President Trump’s announcement to withdraw from the nuclear deal, the President sent a memorandum to all the institutions of the administration, in particular the Departments of State, Treasury and Defense, in addition to the CIA director, and a number of other Departments, to guide them on actions that must be taken to implement the executive order. According to this memo, some points need to be considered:

2- The US President addressed both the Secretaries of State and Treasury to take all the measures required to re-impose the US sanctions. The memo specified all forms of sanctions: starting from those imposed by the National Defense Authorization Act for Fiscal Year 2012, applicable under the Iran Sanctions Act of 1996, and those imposed under the Iran Threat Reduction and Syria Human Right act of 2012, and the Iran Freedom and Counter-Proliferation Act of 2012. The presidential directive specified that the required measures should be taken within a maximum of 180 days (6 months from the date of the memo signed in 8 May 2018).

In this regard, the Treasury Secretary issued a press statement on the role of his Department in re-imposing the sanctions, the statement identified the so-called “Wind-down Periods” to allow companies and banking institutions dealing with Iran to adjust their legal status before re-imposing sanctions on Iran.

In parallel to this statement, the US Department of the Treasury published a list of measures and sanctions to be re-imposed on Iran, which has been previously suspended under the nuclear agreement, bearing in mind that the sanctions will be applied immediately to any party engaged in new transactions with Iran subsequent to the presidential decision.

3- Preparation of a regional contingency plan: The presidential memo called on the Secretary of Defense and heads of relevant US agencies to take swift and decisive action to counter any hostile actions Iran can make against the US or its allies. The memo directed the Department of Defense to ensure that the US takes all the necessary means to prevent Iran from developing and possessing nuclear weapons or delivery systems.

Role of the Congress

It can be argued that President Trump’s decision to withdraw from the Iran nuclear deal is a presidential executive order subject to the powers of the president, and Congress has no role or relation with it. This decision neither require the approval of Congress, whether the Senate or the House of Representatives. Nevertheless, the Congress is likely to play a role in two subsequent matters: the first is the need to approve new sanctions against Iran, which is unlikely to take place in the near term. The second relates to the possibility that the Senate may hold hearings on the repercussions of this withdrawal and the overall strategy of the administration in tackling the Iranian dossier.

In conclusion, President Trump’s decision to pull out of the Iran nuclear deal is part of a lengthy and protracted process that involves the US administration-affiliated agencies that need to take concrete steps to implement the decision. Some of these bodies have taken steps before the presidential decision and some must take subsequent steps to this decision. The responsibility of its execution and the follow-up of the measures related to the re-imposition of sanctions falls on the department of State and the Treasury.