Why Border Crossings in the Middle East have become Increasingly Pivotal 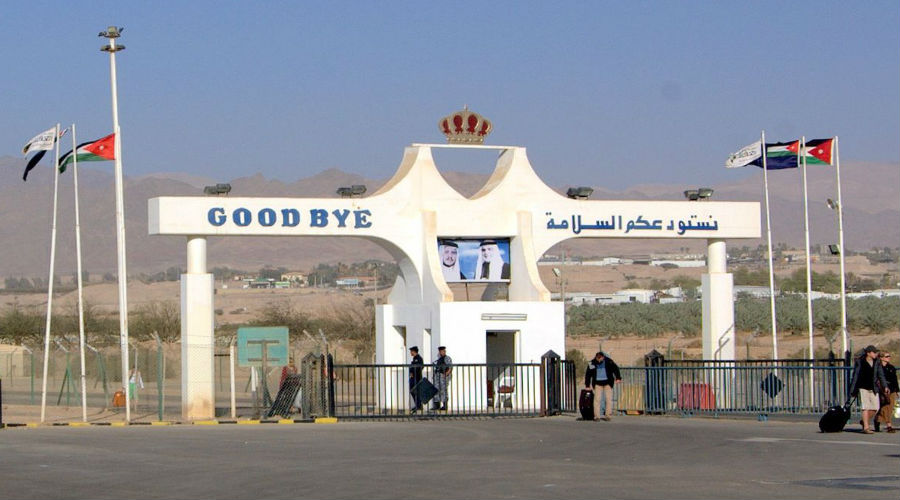 Legal and illegal border crossings in the Middle East remain a key to understanding developments in the Middle East, both within states and between actors. States, parallel armies, terrorist organizations and regional and international powers seek to take control of crossing points and the flows of fighters, refugees, arms, goods and humanitarian aid.

The pivotal importance of border crossings in some states in this region stems from, and is determined by, several variable factors including political, security and economic interests as well as developments on the ground. Significantly, the issue of border crossings has become even more significant over the past ten months of 2017 due to such factors.

1- Restoring Momentum to Bilateral Relations. An evident instance is relations between Syria and Jordan which share a border stretching 370 kilometers. Neither state has closed its embassy in the other state’s capital since the inception of the Syrian civil war in 2011.

Most recently, on October 9, 2017, the Syrian regime’s Charge D'Affaires  in Amman, Ayman Alloush, stated that Syria will open its border with Jordan, that the Nasib crossing will be operated by the Syrian regime and that the opposition will have no role in the process. However, the issue of reopening the crossing between the two countries is complicated due to conditions set by the Free Syrian Army (FSA) to counter the Syrian regime’s conditions, which means the reopening of crossing remains unknown for the time being.

Moreover, the Arar border land crossing between Saudi Arabia and Iraq was re-opened recently for the first time in 27 years in a bid to improve bilateral relations.

2- Trade Facilitation. Lebanese Minister of Economy and Trade, Raed Khoury, in statements delivered on September 8, 2017, said that reopening land border crossings with Syria would facilitate trade in Lebanon. That is because the borders are still closed, sea and air shipping are very expensive, and farmers as well as factory owners cannot even ship exports by land, he said, adding that it is equally important to reopen crossings between Syria and Iraq and between Syria and Jordan to open trade routes. Lebanon's exports fell significantly because border crossings are closed.

Lebanon’s minister of Agriculture Ghazi Zaiter noted that agreements already signed with Syria would be reactivated and land crossings between the two countries would be reopened to facilitate Lebanon’s agricultural exports. Due to the ongoing conflict in Syria, Exports through land crossings is the second most damaged sector after tourism.

Later, on September 28, a third Lebanese official, Minister of Domestic Trade, Cooperatives and Consumerism Abdullah al-Gharbi, confirmed that all border land crossings with Syria will be reopened soon and that import and export traffic will be restored to normal.

3- Imposing Sanctions on Separatist Movements. Iraqi government forces deployed at border crossings in the wake of Kurdistan Region’s referendum for independence, held on September 25 is an evident example of imposing sanctions on separatist movements.

Three days later, on September 28, Turkish Prime Minister Binali Yildirim, during a phone call with Iraqi counterpart Haidar al-Abadi, affirmed his country’s full commitment to cooperation and coordination with the Iraqi government to take all necessary steps to take control of all air and land points of entry, according to a statement issued by the office of the Iraqi prime minister. Yildirim also said that Turkey will hold talks about border crossings, airports and economic activities only with the Iraqi central government. Turkey rejects the referendum because it fears that it would stoke separatist feeling among its own Kurdish minority who account for a quarter of the country’s total population. The same applies to the Iranian policy of economically suffocating Iraqi Kurdistan.

4- Settlement of Disputes. Recent statements made on October 10 by Khaled Aaba, head of the political bureau of the al-Jabha al-Shamiyya faction, reveal that the it handed over the Bab al-Salama border crossing with Turkey to the Syrian Interim Government backed by Ankara to end factional disputes and fragmentation in areas liberated from al-Assad regime’s forces, ISIS and Kurdish groups. The crossing is a gateway to opposition held areas in northern Syria.

Of note, Turkey created a buffer zone last year, and the said faction joined a parallel army commanded by the interim government.  Last week, talks were held about handing over other border crossing linking Turkey to the north of Aleppo province.

5- Resolving Pending Issues. A good instance is the Egypt-sponsored talks between Palestinian political factions Hamas and Fatah, which discussed issues such as Hamas-appointed employees, security and border crossings to end a decade-long rift between Palestinians.

The talks aim, in part, to carry out a proposal to deploy police personnel from the Palestinian National Authority to Gaza Strip to reduce restrictions on border crossings and help over two million Gazans to improve their living conditions and revive their economy.

6- Taking relief aid into conflict zones in the Arab region. Syrian cities such as Raqqa face a challenging situation where International organizations such as Doctors Without Borders find it difficult to deliver humanitarian aid to civilians because of the ongoing war on ISIS. Although the border crossing between Iraq and the northeast of Raqqa is still open, traffic remains too slow and inadequate to fulfill the population’s needs, according to David Swanson, OCHA Public Information Officer.

7- Targeting Terrorist Cross-border Organizations. Lebanon’s army carried out offensives against ISIS positions using helicopters and missiles to regain control of areas around the town of Ras Baalbek, near the last land border crossing controlled by the group.

Turkey too closes border crossings with northern Syria because these areas are held by the so-called People's Protection Units, the primary component of the so-called Syrian Democratic Forces, labelled by Turkey as a terrorist organization.

8- Curbing Maritime Piracy. Morocco plans to buy a French-built satellite designed  for both military and civilian purposes. It will support operations to curb maritime piracy in the Gulf of Guinea, a growing threat to international trade on Africa’s west coast. The new high-resolution optical Earth-imaging satellite will be launched in November this year, according to Moroccan local media. The Moroccan government will use the satellite to counter threats posed by ISIS and combat illegal drug trade and smuggling networks.

The North African country also plans to tighten control on border crossings such as Gibraltar which has become a strategic target for terrorist organizations.

9- Curbing Illegal Immigrant Flow. Such flow originating in Sabratha City, a Libyan coastal city and a major hub for smuggling immigrants to Italy, has decreased, according to data from the United Nations Support Mission in Libya (UNSMIL). The development coincided with reports that Italy has reached a deal with the so-called Dabbashi militia, formed in early 2017.

According to the terms of the deal, signed as part of an agreement between the governments of Libya and Italy, the Dabbashi militia was annexed to the defense ministry of the Government of National Accord led by Fayez al-Sarraj, and was tasked with combatting illegal immigrant smuggling in the west of Sabratha. The militia pledged to protect oil installations in Mellitah City under the supervision of Italian oil and gas company, Eni.

10- Countering Criminal Attacks. Gangs exploit soft borderlines and form interest groups on both sides of targeted borders between states. Perhaps, this was among the main drivers behind reopening the only land border crossing between Iraq and Jordan on August 30, 2017 for the first time in two years. The crossing was closed after ISIS seized control of large swathes of territory in Iraq in 2014. The crossing, called Turaibil in Iraq and al-Karameh in Jordan, is 570 km from Baghdad and 370 km from Amman.

In a joint statement, the two countries' governments said that the crossing was reopened after it was secured against attacks by criminal gangs, and that it will significantly improve bilateral relations. The reopening of the crossing will facilitate movement of goods and persons between the two states, they said. The two governments also pledged to make all possible efforts to ensure smooth traffic, serve the interests of their people and enhance opportunities for strengthening security, stability and developments in both countries.

11- Protecting borders of neighbors of the extended neighbors. Security authorities in regional states are specially interested in controlling not only their state’s borders but also those of extended neighbors. Reports indicate that Iran’s Revolutionary Guard Corps (IRGC) use 100,000-strong militias from Lebanon, Afghanistan, Pakistan and Iraq to control Syria’s land border crossings with Iraq and Jordan. Deployed across Syria, these militias would operate like Iran’s own Basij militia and receive training and funding from the IRGC.

In recent months, the IRGC were focused on seizing control of an overland corridor between Iraq and Syria as well as a 400-km border with Jordan and Iraq. Tehran’s plan to control Syria’s border crossing with the two countries is driven by the IRGC’s increasing human losses in Syria. That is, outraged families of the casualties is pushing the IRGC to send less Iranians and more non-Iranians to fight in Syria.

But Tehran’s bid to control land border crossings between Iraq and Syria using militias also serves its plan to establish the so-called Shia crescent through using its militias in Iraq, Syria and Lebanon, as well as to serve its own economic interests. Within this context, President Hassan Rouhani, in a joint press conference with Turkish President Recep Tayyip Erdogan in Tehran on October 4, 2017, said that relations between the two countries are improving day after day and that they signed a number of agreements on border crossings. Accordingly, Iran will pump additional natural gas supplies to Turkey as part of plans to expand economic relations with its immediate neighbor.

12- Regional and international powers vie to control borders in the Arab region. For instance, the United States and Iran want to control the Syria-Iraq border and use their own local allies to serve their own interests. The United States uses the Sunni tribal militants while Iran uses Shia militants. Of note, if they remain uncontrolled, these  borders will put cities and areas liberated from ISIS under persistent threats.

Iraqi Prime Minister Haidar al-Abadi, in a press conference in November 2016, stressed that security measures need to be put in place to secure Iraq’s border with Syria to prevent extremists expelled from Mosul from returning to it. In other words, protection of this border is one of the determinants of reducing ISIS’ influence.

Moreover, the United States recognized the importance of Syria’s southern regions for weakening the alliance between the Assad regime, Hezbollah and Iran. That is, controlling Al-Tanf border crossing which lies on a route linking Baghdad to Damascus, through al-Ratba city, west of Iraq’s Anbar, and the Syrian town of Sabaa Biyar, would enable Tehran to reach Damascus and the Mediterranean. That is why the United States wants to control this strategic stretch on the Iraq-Syria border.

That said, it can be concluded that controlling border crossing has become a primary indicator of how influential actors in this region are, in armed conflict zones in particular. The chaotic spread of arms, flow of militants and the shadow economies taking shape in the region, all make controlling border crossings between two cities in two states a highly complex and multi-dimensional issue.