What are the Goals of Turkey’s Military Intervention in Syria? 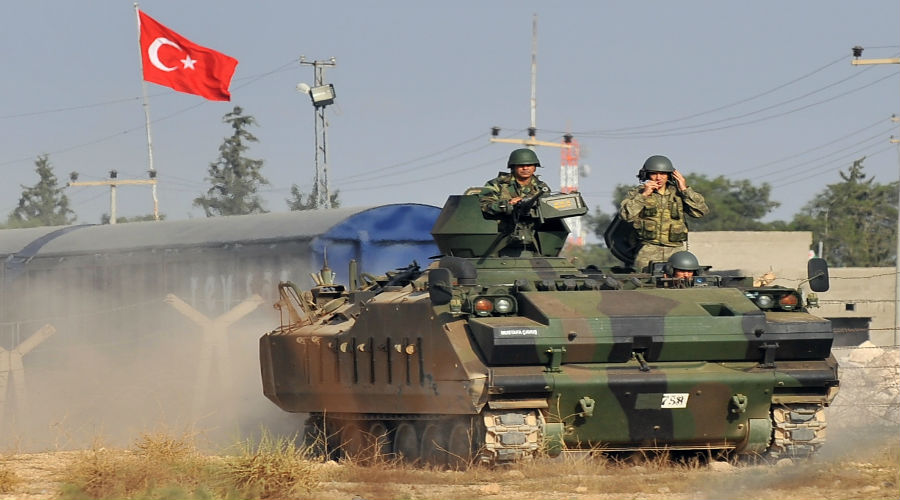 Turkey continues to mobilize more military forces to  Syria’s northwestern  province of Idlib, where the latest deployment aims to enforce an agreement reached between Turkey, Russia, and Iran in September during the sixth round of Astana talks on Syria. The three states agreed to create a fourth de-escalation zone, or safe zone, in the province, marking Turkey’s first such participation in Syria’s territory.

Although Ankara claimed that its new role aims to improve the humanitarian conditions of Syrian civilians, its most important goal is to preempt a Kurdish plan to establish an independent entity on its southern border. Its bid is founded on its designation of the so-called predominantly-Kurdish Syrian Democratic Forces (SDF), which seeks to expand in the region, as a terrorist organization. In other words, the Turkish military intervention in Syria seeks to isolate the Kurds and prevent them from expanding further into Syria’s hinterland, to areas such as Afrin, west of Aleppo City, and the Syria-Turkey border.

Among other things, Turkey’s new move indicates a relative shift in its goals and priorities for Syria from backing the Syrian opposition against the regime of Bashar al-Assad to confrontation with the Kurds. What stands out is that this variable was enough to bolster rapprochement with Iran, as evidenced by joint arrangements agreed by the two states to deal with the implications of the referendum for independence held by Iraqi Kurdistan Region on September 25, 2017.

Turkey’s military presence in Syria is concentrated in three main zones. Zone 1 in central Idlib that houses the main operations HQ inside Syria and received an 850-strong reinforcement. Zone 2 in Turkey’s Hatay Province on its southern border with Syria, where some 25000 Turkish soldiers are stationed, is the nearest line of contact to Idlib. Zone 3 will be set up near  Afrin to lay a military siege on the town and isolate it from other areas that the Kurds want to annex to a de facto autonomous Kurdish-majority region known as Rojava.

Reports from Turkey and Syria, especially those citing sources close to the Syrian opposition, indicate that there is active coordination between a 1500-strong Free Syrian Army (FSA) force and Turkish armed forces which will oversee military operations for the first time. According to reports, the Free Syrian Army believes that these tactics can strengthen its capability to return to areas of influence where some opposition factions and terrorist organizations are operating.

Clashes broke out between factions from the Hay'at Tahrir al-Sham (HST), the most influential group operating in Idlib, and the vanguard of the Turkish forces in the border village of Kafr Lusein. However, reports reveal that clashes were limited and even do not rule out the possibility that these factions would reach understandings with the Turkish forces. This can explain why the Turkish military intervention was delayed for several weeks. Some views have it that the two parties are likely to reach an agreement to avoid escalation.

Turkey seeks to prevent the Kurds from establishing “a new Kobani”, according to statements delivered by President Recep Tayyip Erdogan who presented several justifications for his country’s military intervention in Idlib, including a bid to ward off possible security threats in this area.

Turkey appears to be working on linking Afrin to Idlib province to prevent the Kurds from creating a contiguous territory comprising, in addition to Afrin, both al-Hasakah and Qamishli provinces in eastern Syria. Erdogan hinted at the bid recently saying that Turkey will never allow a terror corridor along its borders in Syria. Moreover, with Turkish prime minister Binali Yıldırım, foreign minister and defense ministers making similar statements to emphasize the bid, military confrontations with the Kurdish SDF can break out if Ankara continues to work on annexing Afrin. Afrin has become a top priority in Turkey's current project especially after the first local elections were held in recent weeks to select representatives of so-called communes as the first step towards creating an independent administration for an autonomous region sought by the Kurds.

Turkey’s current efforts can face three primary challenges. The first challenge is a potential escalation of tensions with the United States which continues to count on Kurdish militia in its war on ISIS. Turkey’s latest military move can impact its relations with the United States, already strained over their evident disagreement about the role of Kurdish militants inside Syria. These tensions can further escalate in the event of wide clashes between the Turkish army and Kurdish militants in the coming period. Moreover, potential escalation between terrorist organizations and armed factions in northern Syria can cause a collapse of security arrangements reached between involved parties.

The second challenge is that it is difficult to protect involved parties in Idlib, especially because tensions between the Free Syrian Army and Hay's Tahrir al-Sham can threaten existing arrangements thus putting more pressure on Turkey which will have constrained options. This is due in particular to the increasing possibility that agreement with Hay’at Tahrir al-Sham, which deployed its fighters in the border town of Atma, north of Idlib, after it threatened to confront the Free Syrian Army.

The third challenge is potential implications of a military confrontation with Kurdish militias for relations with Russia, which is supposed to play a role in disengagement on the Turkey-Syria border in accordance with the trilateral talks held recently with both Turkey and Iran in Astana.

Overall, it can possibly be said that Turkey is keen on not rushing to open confrontations inside Idlib at the mean time because it is waiting for the outcome of understandings reached with various involved parties including Iran, Russia, al-Assad regime and terrorist and armed militias. Moreover, Turkey currently does not prioritize confronting terrorist organizations such as Hay’at Tahrir al-Sham because it is more focussed on preventing the Kurds from fulfilling their ambitions. This may force Turkey to wait to see how all involved parties would react to its potential escalation against the Kurds in the coming period.