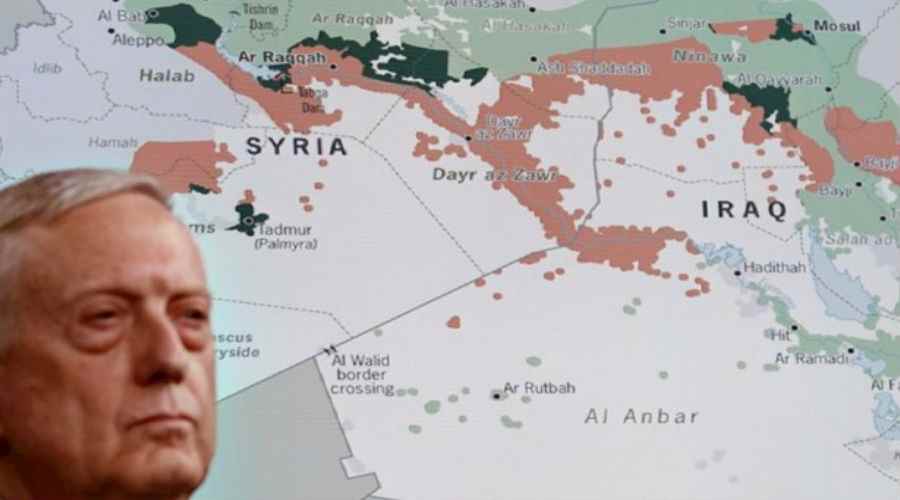 On May 18, the United States launched another airstrike against pro-Assad regime military convoy in Southern Syria, in the vicinity of al-Tanf airbase, used by the US-led global coalition. The attack bears several indications concerning the new shift in the US strategy in Syria, which reflects the fact that Washington has gone beyond its goal of combating ISIS and retaking its capital Raqqa to a more comprehensive vision for the future of post-ISIS Syria.

The main goal of the airstrike is to prevent coalescence of pro-Iranian forces from both sides of the Iraqi-Syrian border through the al-Waleed border crossing. Moreover, it is a preemptive tactic aimed at preventing any threat to the al-Tanf airbase, an area of geo-strategic advantage that allows the US to reinforce its position in commandeering the current battle for Raqqa.

The US launched its first airstrike against the Shayrat airbase in retaliation for Assad regime’s chemical weapons attack on the town of Khan Sheikhoun in Idlib governorate, northern Syria on April 4, 2017. In comparison, the most recent US strike can be classified within deterrence of the allies of Assad regime, and Iran in particular, from going too far and overboard in expanding their deployment.

The timing of the second strike is of special significance due to the fact that it was launched after the Astana agreement had resulted in specifying de-escalation zones in Syria. Washington took this agreement into consideration to launch this strike claiming that there was a party that violated this agreement.

Moreover, the comparison between the two strikes reveals development in the trajectory of relations between actors on the scene in Syria. This development is in accordance with the reactions and stances of main stakeholders and other parties involved in the Syrian conflict.

Although the Russian Foreign Ministry first voiced criticism of the strike, the positions of the Russian Defense Ministry and the US Department of Defense appeared to be different. US Secretary of Defense, James Mattis, said that he believes that Iranian-directed forces have entered the agreed de-confliction zone and acted against advice from Russia. However, he could not confirm that and said that “it looks like the Russians tried to dissuade them.”

These statements bear two indications with the first being that the US and Russia both rejected this movement, but Russia was unable to prevent it. The second indication is that Iran has a secondary or alternative plan that is not in coordination with Russia.

The positions and statements of the involved stakeholders, following the US strike, reveal that disagreements are likely to emerge gradually between the interests and policies of the Assad regime’s allies. That is, Moscow would, perhaps, turn a blind eye to Iran’s behavior on the ground inside Syria that eventually plays into the hands of the allies, even when there are mistakes. However, Moscow will not overlook any acts that go further than this, especially when there is a movement indicating that Iran is creating an alliance that is concerned only with its own interests and relations in Syria and Iraq.

1- A message of deterrence. According to the details revealed by Defense Secretary, James Mattis, in a press briefing held three days after the airstrike was launched, Iran appears to have directed that convoy towards the al-Tanf airbase used by US forces. He described the movement as a violation of the “established de-confliction zone”.

This was a clear signal that the airstrike was launched because Washington wants to continue its policy of deterring the Assad regime. That is especially because the airstrike was conducted on the same day (May 18) when the United States Congress re-introduced the Caesar Syria Civilian Protection Act of 2016, after leaking a treasure trove of photographs that document Assad regime forces’ mass torture and killings of its opponents inside the notorious Sednaya prison. The strike was also launched to deter the Assad regime’s allies and Iran in particular, which is the biggest loser in the latest US offensive.

According to the Syrian regime’s news agency SANA, the so-called Kata'ib Sayyid al-Shuhada militia, an affiliate of the Iranian-allied People's Mobilization Forces (also known as Hashd al-Shaabi), said that one of its militants was killed and six others were injured by the strike. Other news websites revealed that a militant from Lebanon’s Iranian-allied Hezbollah was killed while four tanks and an anti-tank missile carrier. This means most of the convoy - comprising four tanks, a ZSU-23-4 Shilka, a lightly armored self-propelled, radar guided anti-aircraft weapon system, and 12 vehicles- was destroyed.

2- Controlling a Crossroads. The US Department of Defense (Pentagon) announced that the airstrike targeted al-Zarka area, some 30 km from al-Tanf airvase, which indicates that Iran was perhaps seeking to deploy forces in the vicinity of the base to be allow them to communicate  with and join counterpart militias in Iraq i.e. Hashd al-Shaabi.

Preparations for this bid were hinted at by Iraqi Prime Minister, Haidar al-Abadi, when he said that Iraq may continue its operations inside Syria to combat ISIS. This indicates that several parties are trying to maintain connection points between both sides of the border. Hence, the United States’ action, which prevented the convoy from advancing to the airbase, means that Washington rejects this bid aimed at controlling a main crossroads leading to Iraq.

Hence, it can possibly be said that the second US airstrike in Syria was launched as part of pre-emptive tactics aimed at depriving Iran and the Assad regime’s allies from free movement in a US area of influence and control that would be damaged by Iranian presence, and consequently preventing movements east of Euphrates River and controlling the border to prevent Iran from expanding into it.

In conclusion, overall, these developments indicate that the United States recognizes that Iran is working to expand its movement and presence according to its own agenda, even if that means bypassing or trespassing the Russian role, which acts like a pacemaker or regulator in the Syrian arena.

However, in light of the recent rapprochement at the level of coordination between Moscow and Washington in Syria, Iran believes that this can block its project whose time, in Iran’s view, has come as ISIS is nearing its end. According to Iran’s view, Hashd al-Shaabi can act like a bridge, where its cells operate on the ground, while this project is being carried out in accordance to Iran’s own agenda.

Perhaps, it still unclear whether Iran has understood these messages or not. However, there is no doubt -based on previous experience- that Iran will try to use similar tactics to repeat the attempts several times. This bid will hinge on Washington’s ability to maintain its deterrence mechanisms, while bolstering them every now and then.