Fragmentation of Fronts and Gradual Annexation in Syria and Iraq 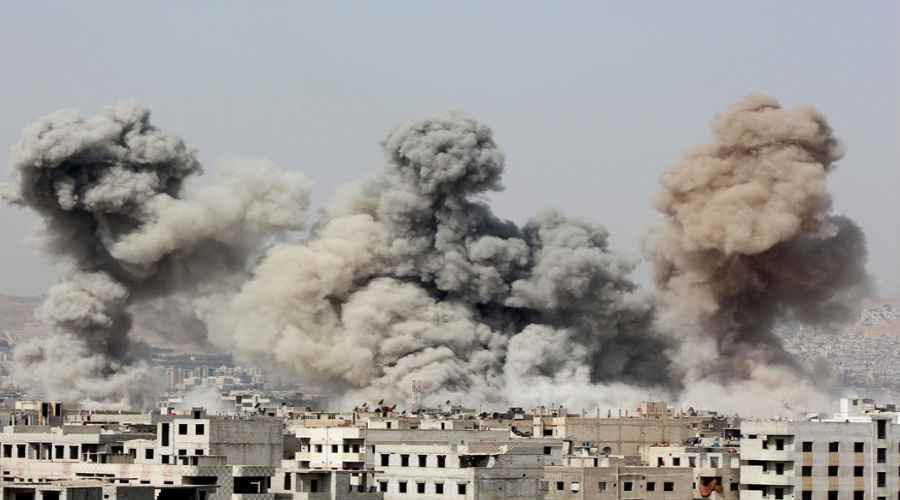 Regular armies, parallel militias and hybrid groups are pursuing a new strategy in conflict zones in the Arab region. The phenomenon is known as gradual annexation where criminal gangs, sometimes, support terrorist organizations, militias and regional armies, particularly during stages of collapse or weak state security structures. This is illustrated in the prevailing situation in Syria and Iraq over the past six years.

Resorting to this tactic, which later took materialized into a fully integrated-strategy is driven by several interconnected factors. These include the following: a continuously changing pattern of confrontations, inability to take control of enemy’s areas of influence or tighten control of central geographical areas, giving full attention for control of other geographical areas, and avoiding civilian casualties. In addition to reducing infrastructure damage, bolstering troops’ morale, cutting finance and supply lines between armed groups, overlapping factional areas of control, activating non-central area-based control and securing shared borderlines.

Battleground experience in Arab armed conflict zones show that the gradual annexation strategy implies that actors, whether they are regular state armies or sub-state armed groups, enforce gradual and slow control of limited areas of neighborhoods, small villages and townships, roads or border strips as an advance into required territories. These forces seek to entrench their influence and positions after fragmenting these areas and then move to control other small areas, so on and so forth, until these forces complete the successive cumulative control over targeted areas. Throughout this process, forces tend to secure other parts, until they eventually fragment combat fronts or battlefields.

The policy of annexing neighborhoods and districts require capabilities some of which are not available for parallel armies. These include air support, fighters, logistic supply and continued fortification of controlled areas. This explains why al-Assad’s regime in Syria was able to restore control over a central city, as Aleppo, using the slow annexation strategy since 2013 when it began to besiege areas held by the armed opposition. Then, the regime forces secured control over a town, and from there it secured neighboring villages, moved to the airport and nearby hills and industrial zones until it laid siege to the whole city/ laid a full siege to the city.

1- Changing realities of field confrontations between asymmetrical parties. This is due to a lack of a definite theatre of operations and geographical areas that allows easy incursion. Iraqi government forces and the so-called Golden Division of the Counter Terrorism Service, on May 3, 2017, liberated the Zanjili, the largest district in Western Mosul, from ISIS. The move led to the old city in central Mosul being besieged from all sides, where old avenues blocked the security forces’ attempts to advance over the past two months.

2- Impossibility of synchronized control over enemy’s areas due to the geographic reach of the conflict. Regular armies, in particular when they are weak, recognize that it is impossible to regain control over wide areas in one operation because of the difficulty to defend them and entrench their presence in liberated areas in a short-run. This is due to the fact that enemy forces have extensive experience of the neighborhoods’ access points. This forces regular troops to focus on smaller sectors, such as blocks of buildings, parts of a certain road, whereas regular armies can concentrate their combat capabilities, airpower and artillery in particular, on targeted areas.

3- Tightening control over central geographical areas.  To besiege strategic districts and neighborhoods in areas held by armed groups in Syria, al-Assad regime used armed forces to launch settlement initiatives - known locally as local reconciliation or forced reconciliation- in conflict zones hosting armed groups to restore security and stability, in particular those that border neighborhoods held by the regime itself. The aim is to tighten control over these neighborhoods. Within this context, the map of areas covered by compulsory reconciliations shows a common denominator: these areas constitute strategic keys or access points for areas previously held by armed groups.

4- Focusing on other geographical areas. After governmental forces recapture areas from military opposition, the government benefits from lessening its combat burden and can utilize its resources to seize densely-populated areas, by encircling them while applying attrition tactics. This strategy helps achieve two key goals. The first is to further drain enemy forces and resources that have been already limited due to the siege. The second is to reduce the enemy’s areas of control to decrease the maneuvering margin and combat area. It is noteworthy that Muadhamiya, Souq Wadi Barada, Qudsaya and Zakiya, which are suburbs of the Syrian capital Damascus, constituted access points for Darayya, Wadi Barada, al-Hama and Khan al-Sheeh, respectively.

The so-called “four-towns agreement” involves Zabadani and Madaya in south-west Syria, and the towns of Kefraya and al-Fuaa in the north between Hay'at Tahrir al-Sham and Harakat Ahrar al-Sham, as one party, and Iran and its ally Hezbollah, as the other party. The agreement provided al-Assad regime with more armed elements from al-Fuaa and Kefraya to meet a severe shortage of manpower while it works on the militarization of society as a survival strategy.

5- Avoiding civilian casualties. Light arms are used during incursions into neighborhoods to protect civilians. Iraqi forces trying to force out ISIS from Mosul city used this tactic. Ali Al-Matyoni, MP and member of the Parliament’s Security and Defense Committee, in statements delivered on April 15, 2017, said that the new strategy pursued by Iraqi forces implies slow advance into the city’s central and western neighborhoods, while using light arms in combat to avoid civilian casualties.

Moreover, Iraqi forces are using siege and stealth tactics in Mosul to minimize harm among hundreds of thousands of civilians, according to Lieutenant General Abdul Ghani al-Assadi, a commander of the Counter Terrorism Service (CTS), in statements delivered to Reuters on April 24, 2017. He said that Iraqi forces had to use this tactic due to the nature of Mosul’s Old City and its narrow streets and alleyways, which increases the risk of civilian losses.

6- Bolstering troop morale. Regular armies seek to deploy, and push their troops into areas wherever progress can be made to cover up their losses sustained during confrontations in other combat areas and attempt to re-establish a balance of power. This is particularly pursued in light of fragile situations, where factions impose their control, to bring about quick collapse in these areas.

7- Cutting supply lines between armed groups. To tighten siege of militias and terrorist groups, regular armies, such as in Syria, block entry of fighters, arms, food assistance and medicines and bomb hospitals, factories while sustaining military offensive momentum/ pursuing military attacks, and deploying new troops to relieve soldiers involved in the siege. Within this context, al-Assad regime army and allied militias advanced to the highway that links Damascus and Deraa, because it is the only main supply line for the regime forces in the southern province, while tightening control over the towns of al-Faqie and al-Wardat and nearby military posts.

Moreover, the so-called Syria Democratic Forces (SDF), which contain Kurdish and Arab elements, is besieging the city of Tabqa after isolating large swathes from areas controlled by ISIS, and cutting all main supply lines of the group’s elements and commanders from the north, east and west. However, what can block these forces from advancing is Turkey’s attacks on the Kurdish so-called People’s Protection Units (YPG) because they are an affiliate of the rebel Kurdistan Workers’ Party (PKK) that has been fighting Turkey for three decades.

8- Overlap of factional areas. A good instance of this is Syria, where some neighborhoods are held by local factions that do not belong to larger groups. For instance, the Al-Bunyan Al-Marsous Operations Room- an alliance involving the southern factions of the Free Syrian Army, Jaysh Al-Yarmouk, Hay'at Tahrir al-Sham and Harakat Ahrar al-Sham and other factions- succeeded in defending Deraa City from al-Assad regime. The regime’s army have made several attempts seeking to open the highway to the Nasib Border Crossing on the Jordanian border.

The Al-Bunyan Al-Marsous Operations Room has pursued the strategy of gradual annexation and controlled parts of the city’s neighborhoods and up to May 5, 2017, remains steadfast and is even advancing to tighten its control of the southern Manshiya district. This district is strategically important because it overlooks other neighborhoods that are still controlled by the regime forces and house government departments and security services branches. This may explain why opposition forces were forced to retreat when they advanced into the district where al-Assad regime’s army is using highly-explosive missile launch pads to attack the liberated neighborhoods of the city.

9- Establishing regional decentralization is what armed Kurdish factions aspire to achieve in conflict zones. The so-called Kurdish SDF militia involved in an offensive codenamed Wrath of the Euphrates, aims to purge the last remaining pockets of ISIS in Tabqa City, in particular after they controlled large swathes of the city, according to field reports in early May, 2017. This progress would contribute to preparations to the battle for Euphrates dam in Tabqa, 50 km west of Raqqa, ISIS’ major stronghold.

Hence, seizing control of Tabqa and its dam on the Euphrates River in the south would set the stage for the SDF to advance on Raqqa and eventually seize control of areas held by ISIS remnants that are now facing mounting pressures. However, there are concerns that escalating confrontations can force ISIS militants to damage or even blow up the dam in Tabqa triggering a humanitarian disaster if surrounding villages and towns are submerged by floodwater.

10- The goal of protecting and controlling borders can explain why Hezbollah has deployed reinforcements to Syrian areas bordering eastern Lebanon where it can launch attacks on Wadi Barada area bordering Zabadani City and Madaya Town. This occurred in July 2016 as part of a plan to gradually annex in areas surrounding Damascus and seizing control of areas bordering Lebanon, while stopping the military attrition resulting from intermittent clashes.

In conclusion, seizing control of areas, districts and cities in conflict zones in the Arab region cannot be achieved all at once, in particular in Syria and Iraq. An alternative tactic would be to seize control of checkpoints, positions, posts, hills and neighborhoods that are considered strategically important. Concurrently, linking all areas brought under control to counter opponents, limit their mobility, reduce their arms caches, cut their supply lines and block their entry points and remaining pockets.