Goals and Challenges Facing US Deployment in Manbij 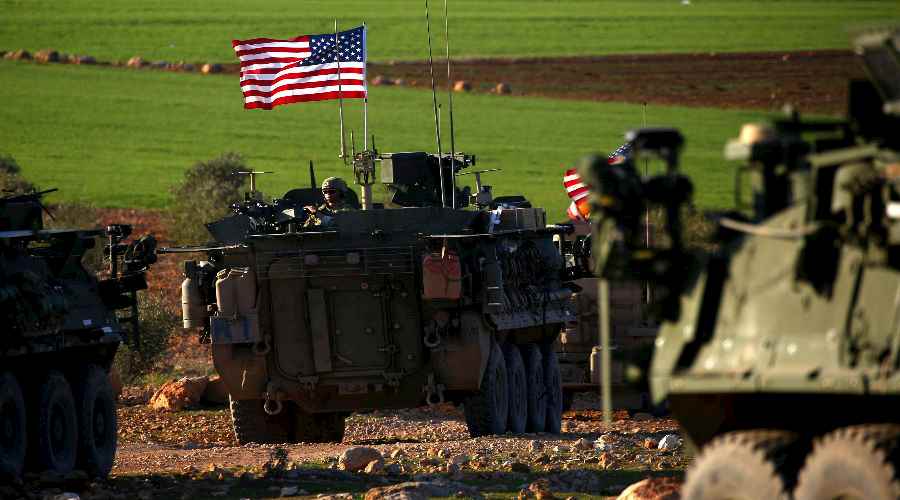 The United States recently deployed 400 additional troops, including a team of army rangers and marine artillery, to the vicinity of the geopolitically important Syrian city of Manbij. The deployment occurred within the context of a new Pentagon plan, which, according to reports, was recently delivered to US President, Donald Trump. The plan’s objective is to ramp up the fight against ISIS, and appears to have been met with approval.

It can be stated that the main purpose of the US deployment is to force Washington’s clashing allies to direct their attention on a common foe, ISIS. Yet, this approach carries many challenges as well.

According to a statement by General Joseph Votel, head of US Central Command, during a Senate hearing, the purpose of deployment in Manbij was to prevent confrontations between the Syrian Democratic Forces (SDF), including the Kurdish YPG group, and Turkish forces. This is consistent with statements made by Pentagon Spokesman Captain Jeff Davis that the aim of the deployment is to be a “visible sign of deterrence and reassurance.”

Such statements indicate that the relation between the SDF and the US is still an issue of contention between Ankara and Washington. Ankara takes an aggressive stance against the SDF and considers it a terrorist organization, as Turkey views its arm the People’s Protection Unit (YPG) as an extension of the Kurdish Workers’ Party (PKK). Washington on the other hand perceives the SDF as a major partner in the fight against ISIS. There are also indications that the United States even considers the SDF to be the perfect model for the establishment of a multi-ethnic armed force in Syria. Washington might see that alienating either ally may hinder the operations to liberate Raqqa, in light of the difficulty in finding an alternative due to time constraints, coinciding with continued success of the Battle of Mosul in Iraq. This would mean that any delays would enable ISIS to reorganize itself in Raqqa.

The feasibility of preventing a confrontation between allies can be put to the test, given the spread of different armed factions stationed in Manbij. Such a map would make evident that most of the warring and allied factions are positioned within a close proximity of one another. American forces are positioned in the area of Rmelan, and separate the Kurdish and Turkish forces. The Turks are committing around 350 troops as part of operation Euphrates Shield, which Turkey claims will back the Free Syrian Army in the north and west of Manbij. On the other hand, Syrian government forces are positioned in the western zone of Manbij, being supported by Russian air force and Iranian-backed militias. They are specifically concentrated in the area of al-Khafsah, 35 km south of Manbij, which is a strategically significant region due to the presence of the main water source for Aleppo.

In light of this, it seems difficult for US forces with their limited numbers to carry out such a mission, unless the United States puts pressure on its allies to commit to a joint mission against ISIS. In addition, the US must set a vision of how to manage these territories in a collaborative manner with Russia.

There are several objectives Washington may seek to attain through its current plan, and can be summarized as follows:

1. Strengthening US presence in Syria: Despite Washington’s early intervention in the Syrian conflict, and its leadership of a coalition of over 60 countries in the war against ISIS, it has continued to play a secondary role given the evident Russian military presence in Syria. Though the total number of US military personnel currently deployed in Syria is disputed to be between 500 and 1000, it is still a small number. It is important to note that Washington had no significant battle deployment in Syria before this point, which indicates that it seeks to bolster its presence in Syria in the near future.

2. Expanding the range of available options: This is especially pertinent given rising American doubts with regards the possibility of increased coordination with Russia in the Syrian conflict. In a previous visit to NATO command in Brussels in mid-February 2017, US Secretary of Defense James Mattis also stated that Russia would have to “prove itself first”, meaning that any possible cooperation between Washington and Moscow in Syria will face serious obstacles, which cannot be taken lightly.

3. Preparation for the battle to re-capture Raqqa: Though American commanders assured that US force in Syria would not engage in the front lines, it will nevertheless be in close proximity to them. This means that, in fact, the US presence will function as a land-based military force for coordination and leadership in the upcoming battle for Raqqa, especially given the reliance on the SDF as a main US-backed participant in the battle. Yet this will be very difficult to achieve if Syrian government forces, or other such groups, participate in the battle.

General Joseph Votel has also confirmed that the mission of the US force is difficult and arduous, and that it requires hard work both militarily, and diplomatically. This means that US troops have to successfully deter any fighting between their allies. Furthermore, although the US forces are well-armed, there are indicators that they are unlikely to be protected by the Turkish forces. This is a weak spot in the chain, especially given that Ankara, which has recently increased coordination with Moscow, is critical of Washington’s plan for the coming battle in Raqqa. The Turks have also announced that they will fight the Kurdish forces in Manbij. Turkish Prime Minister Binali Yıldırım stated that Washington’s plans and the Kurdish presence might constrict Turkey’s desire to establish a safe-zone, and that such a safe-zone is a current point of agreement between Turkey and the Trump administration.

If the disputes between both parties escalate, the US forces may find themselves facing increasing danger, and consequently the increasing likelihood of mission failure. It doesn’t seem likely that the SDF will carry out violent attacks against Turkish forces inside Syria. The SDF are adamant that they should have a major role in the battle for Raqqa, and believe that the liberation of many villages in Raqqa’s vicinity is an achievement that they should be credited with. Their aim is to subject these villages to a regime of joint administration between the Kurds and the Arabs.

Without a doubt, these challenges reduce the likelihood of success for the proposed American plan, especially given that the challenges exist simultaneously with American doubts over the Russian position with regards to the latest developments in the conflict. Field tactics reveal that Washington prioritizes military mobilization over joint agreements and arrangements with allies and the various forces in Syria. Thus, it can be expected that testing US tactics will have a strong negative effect on Washington’s policies, if Washington doesn’t work on adopting a comprehensive multi-dimensional strategy including issues such as Washington’s position on safe-zones, in addition to agreements on the future of the liberated zones, especially next to the Turkish-Syrian contact line.