Will the elected president moderate his policies after his election win? 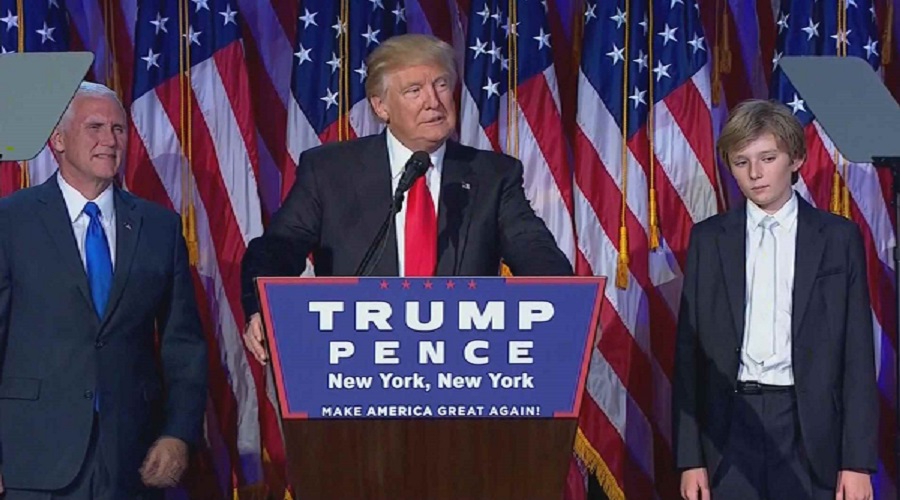 Donald Trump’s speech, after his victory in the US presidential elections on November 8, revealed slight changes to the rhetoric used during the campaign, which was laced with extremism and racism.

Trump, who was elected to be the 45th president of the United States, adopted a more cautious, disciplined tone in his acceptance speech, taking a conciliatory line and talking about overcoming the divisions that had marred the election season. Trump confirmed that he would be a president for all Americans and said that he would work for peace with countries around the world. He even thanked his rival Hillary Clinton and praised her efforts to serve the country, in contrast to his accusations against her during his run for office.

While the moment of Trump’s victory demanded a moderate speech in contrast to the language he used during his campaign to win votes, it was notable that Trump appeared with his youngest son, apparently promoting the image of the traditional American family man rather than the outspoken, uncouth presidential candidate. And just hours after his victory, the Trump campaign deleted a video on his campaign website in which he said that he would ban Muslims from entering the United States.

All this poses the question: is it possible that Trump’s new discourse reflects the kind of transition many extremist leaders have historically gone through after reaching power? Does it indicate that he will genuinely shift towards the political center and adopt less extreme positions?

The job changes the president

Regardless of leaders’ declared political goals, the views they adopt and promises they make along their campaigns, they can quickly change views once they reach high office.

One example is that of Greek Prime Minister Alexis Tsipras, who took office as the head of a radical leftist coalition, Syriza, the party most deeply opposed to austerity measures in Greece. When the coalition won the Parliamentary elections of January 2015, Tsipras announced that Greece would forgo “disastrous” austerity policies.

However, he soon came up against Greece’s creditors, who threatened to kick his country out of the Eurozone just seven months after he took office. He was forced to accept the Troika’s terms, which entailed a raft of harsh austerity measures which he was compelled to defend, backing down from his previous positions stating that the package was necessary to keep the Greek people alive.

The arrival of France’s radical leftist President, François Mitterrand, to power similarly raised fears that he would seek to overturn the country’s economic system in line with his previous ideological calls for a global revolution. There was no fundamental change in the French system during his 14-year period in office. L'Express said after his death in 1996 that he had opposed state intervention in the economy and discarded the idea that a Socialist president could not be convinced to adopt a free market and privatization approach.

Even in the Middle East, hardline Israeli politicians have often been the ones who sat down to negotiate with Arabs - notably, Israeli Prime Minister, Yitzhak Rabin. After he had become Defense Minister during the first Palestinian Intifada of 1987, he responded to demonstrations with brutality, ordering his troops to break the bones of Palestinians. However, after becoming prime minister he worked for peace, signing the Oslo Accords in 1993 and confirming that time is not in Israel's favor and that it must achieve peace by any means.

The same thing applies to Menachem Begin, the Israeli Prime Minister, who negotiated a peace deal with Egypt and signed the Camp David Accords in 1978 despite his history of extremism. Begin was a founder of the Irgun, a Zionist militia that carried out several massacres including Deir Yassin. He repeatedly used his famous slogan: “We fight, therefore we are!”

Reaching the position of president or prime minister can change the attitude of political leaders and make them more flexible towards seeing things realistically in ways that contrast with their discourse and experiences before taking power. This raises the question: will the same apply to Trump?

Many factors can lead to a change in the tendencies of leaders: their characteristics as individuals; their ability to adapt to the nature of the political regime and the environment surrounding the political process; the institutions that take part in decision-making and the level of influence the leader exercises over them. In this context, it is possible to identify several factors that could push Trump to moderate his fringe views:

1. Personal attributes.  Paradoxically, President Trump’s personality may hinder him from carrying out his radical policy proposals. Dan McAdams, Professor of Psychology, Human Development and Social Policy at Northwestern University, wrote in The Atlantic in June that Trump’s history as a businessman means he is used to negotiating and bargaining. McAdams said that based on analysis of Trump’s personality, the president-elect has no rigid ideology but is rather a pragmatist who is prepared to change to be in line his interests.

Trump’s working approaches may also mean he thinks regarding both present and future. Yael S. Aronoff, Associate Professor of International Relations at James Madison College, wrote in her book The Political Psychology of Israeli Prime Ministers: When Hard-Liners Opt for Peace that leaders who focus on the present can understand rapid developments happening around them, which means they are flexible and can -- albeit slowly -- adapt to change, compared to those who focus mostly on the future. A mix of the two approaches can result in a high degree of flexibility and openness to different options.

Other psychological analyses of Trump’s personality have found that he is a narcissist. Leaders with this characteristic often adopt strategies of negotiation and flexibility when they are in charge of powerful countries. However, they become more extreme and take more rigid positions when they lead less powerful countries, as they feel that any compromise will expose points of weakness and may lead to their humiliation.

2. Taking on the role. The demands of the job can result in fundamental change in the personality of the candidate after they have reached power. Psychological studies reveal that people experience perceptions of the self-resulting from their convictions of their ability to meet the demands of a particular role, as well as taking into account the opinions of others and the attitudes imposed by the context. The individual tries to meet all these perceptions, to the point where he backs down from his personal convictions to satisfy the demands of the role -- sometimes imitating previous models that have been admired by public opinion.

Trump may be particularly prone to mimicry with a view to meet the demands of the position, giving his previous roles in films and reality TV programs. His lenience towards imitation was clear in his victory speech, in which he very closely followed protocol -- in contrast to the methods he used to win the election.

3. The American political system. The political system in America is designed to prevent an autocracy emerging, and to block any president from overstepping constitutional and legal frameworks. The checks and balances inherent in the American system reduce the power of the president to put pressure on Congress to accept his decisions, while the Supreme Court monitors the president and Congress to ensure they do not violate the Constitution.

Furthermore, America's federal system allows every one of the 50 states to set its laws. This limits the power of the president to make fundamental changes to the system or adopt legislation that violates the constitution, such as by preventing a particular ethnic or faith group from entering the United States as proposed by Trump throughout his campaign.

Some analysts fear that with a majority of the Republican party in control of Congress and the White House, Trump’s policies will be passed more quickly and he will be able to enact fundamental changes that he proposed during his election campaign. However, the reality may be that Republicans may put the brakes on his more extreme policies, especially given that his proposals created deep divisions within the Republican Party, even prompting opposition from hardliners within the party, such as House Speaker, Paul Ryan.

4. The complexities of policy-making. The process of passing a policy in the American system is incredibly complicated and involves several levels of decision-making and implementation. For example, the president must work with various agencies during the process of formulating foreign policy, including the state department and its various branches, American embassies around the world and agencies that gather and analyze data to weigh various policy alternatives.

This means the president may only set the general philosophy and direction of the foreign policy framework, while other institutions take on the task of executing it according to their preferences and perceptions of American interests.

5. The volume of information. Given the massive amounts of often contradictory data that are presented to the political leadership, the president may be cautious before taking important decisions -- although people in business are often prone to taking risks. A look at Trump’s resume shows that following the financial crisis of the early 1990s; he began tending towards prudence in managing his businesses.

Furthermore, upon taking power, the President gains access to intelligence that is not available to the general public. John McLaughlin, former Deputy Director of the CIA, said in November 2016: “I have seen the transformation that occurs when candidates become presidents and realize the awesome responsibility that rests on them.”

6. Coordination between institutions. The process of taking decisions often demands that the president coordinates with various government bodies. International relations literature indicates that coordinating with numerous authorities can use up an enormous amount of energy, forcing the president to delegate some tasks to other agencies.

Therefore, institutions other than the president may take decisions either based on calculations of cost and benefit or institutional memory - that is to say, adopting common strategies or making compromises to reconcile the interests of rival institutions. Every agency in government is trying to gain the maximum possible powers and increase its allocated budget. In general, this means that organizations shy away from taking fringe positions in the decision-making process.

In summary, one can say that the demands of high office and the complexities surrounding it often push individuals to adopt unexpected policies that contradict their personal convictions but gain them a larger margin of flexibility in the decision-making process. At the same time, state agencies, especially in democratic countries, have an enormous influence over the process of policy-making, pushing for the state’s interests, while the role of the head of government can be limited to setting the philosophy and general direction of policy.