Opportunities and Challenges of Integrating Syrian Refugees in Local Economies 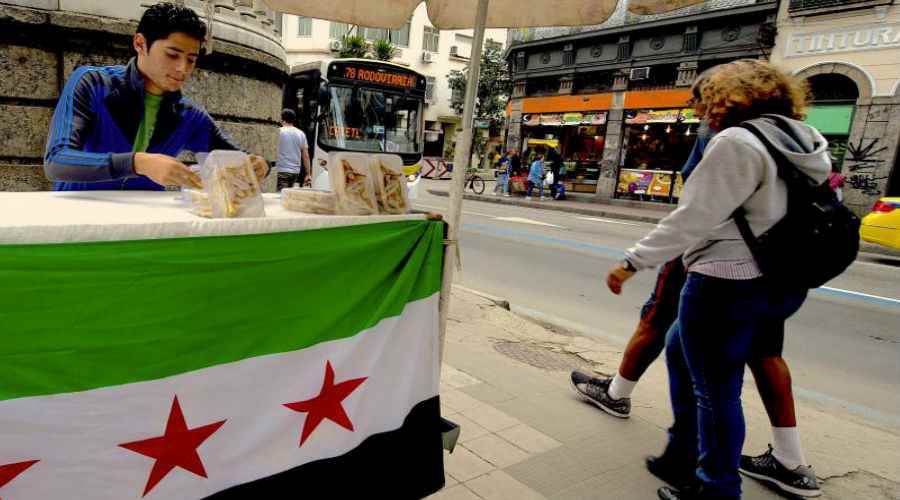 Several countries hosting Syrian refugees have adopted policies to integrate them in local economies by training them to join the labor market and stimulate investments, especially refugees with “solvency”. The policy primarily aims to alleviate the financial burden on governments to house them, and at the same time help integrate them in local communities eventually.

In the region, Turkey is the most successful model for accommodating Syrians in its economy, whether in the labor market or receiving their investments. The Turkish market has become a main destination for Syrian investments leaving Syria.

Germany is one of the main European countries exerting great efforts to integrate Syrian refugees in German society. One of the key measures it took is passing law for the integration of refugees, which essentially provides financial, cultural and economic conditions needed to shelter refugees in the country.

Despite the expected positive outcomes of applying the above policies, the risk of terrorism, cultural difficulties, and growing economic and financial burdens of sheltering refugees are main obstacles undermining chances of integrating them with ease in local communities. Moreover, it could give rise to a counter movement against “open door” policies of receiving Syrian refugees in some countries.

As the armed conflict in Syria continues more than five years later, the number of people fleeing the country has increased making Syrian refugees in the Middle East and North Africa reach nearly 4.7 million at the end of October 2016. The majority of them are in Turkey, numbering 2.7 million Syrians, while 2.1 million live in Egypt, Iraq, Jordan, and Lebanon. There are also 29,000 others in North Africa, which makes the overall number of Syrians a significant demographic in the populations of neighboring countries. According to some estimates, they even represent a quarter of the population in countries like Jordan and Lebanon.

With stricter refugee policies in most neighboring countries, the number of asylum seekers in Europe has risen to reach 1.1 million at the end of August 2016, according to the UNHCR. Half this number has already reached Europe, at an estimated 550,000 Syrian refugees in Europe, mostly in Germany, Serbia, Sweden and Belgium.

Many countries in the Middle East and Europe adopted measures to integrate Syrians in local economies through the following policies:

1. Labor market: The ILO stated that the majority of Syrian refugees are enduring difficult conditions in regional labor markets, including low wages, lack of skills and low levels of education. In the Turkish labor market, there are around 250,000 – 300,000 unregistered Syrian workers who do not have the necessary legal and social protection. The number of Syrians who have official work permits in Turkey since 2011 until the end of 2015 is no more than 3,600 workers.

In order to integrate Syrians legally in regional labor markets, Turkey, for example, issued a law in January granting refugees who have Temporary Protection cards the right to work permits. This could pave the way for them to be covered by labor rights such as minimum wage and appropriate work conditions.

In Europe, several European governments started to encourage companies to hire refugees by sponsoring integration classes, and providing training or education opportunities. Then distributing qualified refugees among businesses that need these skills.

2. Investment facilitation: Several neighboring countries provided facilities and guarantees to attract Syrian investments that fled Syria as a result of the five-year armed conflict. The majority of these investments headed to Turkey, especially the southern provinces.

According to figures by the Union of Chambers and Commodity Exchanges of Turkey, 4,450 Syrian companies opened in Turkey between 2011 and 2015. Meanwhile, the transfer of capital from Syria to Turkey amounts to $10 billion which is mostly concentrated in the catering and textiles industries.

Jordan and Egypt are also main destinations for Syrian investments, amounting to $280 million and $500 million, respectively, in recent years.

3. Supporting small projects: In cooperation with global funding institutions, regional governments encouraged Syrians to start small businesses to create jobs and generate income. The most prominent of these initiatives is the “Support Syrian Refugees” project in cooperation with the Jordanian Hashemite Fund for Human Development and UNHCR.

Similarly, the US business magnate George Soros announced in September he will provide $500 million to support emerging companies and social initiatives established by immigrants and refugees.

4. Integration laws: Germany’s parliament approved a new integration law in July which is a key shift in how the government is addressing the crisis of refugees from the Middle East and Africa. Its statues reveal a form of quid pro quo to integrate refugees in German society.

While the legislation stipulates financial and political guarantees for sheltering refugees, at the same time it places restrictions and conditions on refugees to meet requirements for cultural, economic and social integration in the country.

For example, the law states that in order for a refugee to be guaranteed temporary or permanent residence they must learn German. Refugees who are in training will be given residency permits until they finish training in order to find work. The law also restricts the movement of refugees inside Germany, stating that asylum seekers must remain in certain areas in order to be distributed across Germany in a better way. It also bans the emergence of marginalized neighborhoods. If these rules are broken, asylum seekers are subject to penalties.

5. Citizenship: In July, Turkey’s President Recep Tayyip Erdogan proposed the possibility of granting Syrian refugees Turkish citizenship as a solution to better integrate refugees in communities, especially those who are highly educated, skilled or wealthy. Such a step is expected to positively impact both the Turkish economy and Syrians themselves.

However, countries are facing many obstacles in integrating Syrians in local economies, including:

1. Cultural differences: While there are minimal cultural and religious differences in neighboring countries, many European officials are concerned that by taking in Syrian refugees this would impact the European identity. There is also the language barrier which could prevent Syrians from integrating into European societies in general, making it less attractive for Syrians to join the labor market.

Meanwhile, European security agencies are worried about terrorist elements infiltrating refugee communities to carry out terrorist attacks. This could impact the freedom of employment and movement of Syrians on the continent.

2. Lack of skills: Several officials in European companies, especially in Germany, note that refugees do not have the necessary psychological or language skills to qualify them for the labor market. There are other regulatory restrictions on Syrian employment in German companies, especially those in the financial and aviation sectors which require security checks for employees which is not possible for the majority of Syrian refugees.

There are other restrictions. In recent years in conjunction with the escalation of the refugee crisis, Lebanon and Turkey issued laws limiting some professions such as physicians, lawyers and others to original citizens. Which in reality only leaves the construction, agriculture and other sectors more open to Syrian labor.

3. Financial burdens: One of the top obstacles of integrating refugees in local economies is the high cost of the process of improving their technical or linguistic skills, or assisting them in finding work. For example, these two items could cost the German government $11.5 billion by the end of 2020 in order to assist refugees to qualify for the German labor force. There are also other costs, estimated at $26.8 billion, to fund unemployment and housing benefits, etc.

At the same time, spending on accommodating refugees by some governments in the region has risen. Since 2011, the Turkish government has spent $7.6 billion in assistance, while Jordan has spent $6.6 billion, and needs another $8.2 billion to deal with the refugee crisis until 2018.

In conclusion, despite the high cost of accommodating Syrian refugees in various societies and integrating them in local economies, there are also major gains such as cheap labor and Syrian investments. This may strike the needed balance in the economic equation for Syrian refugees in the long run.