Non-Traditional Solutions for Dealing with the Refugee Crisis 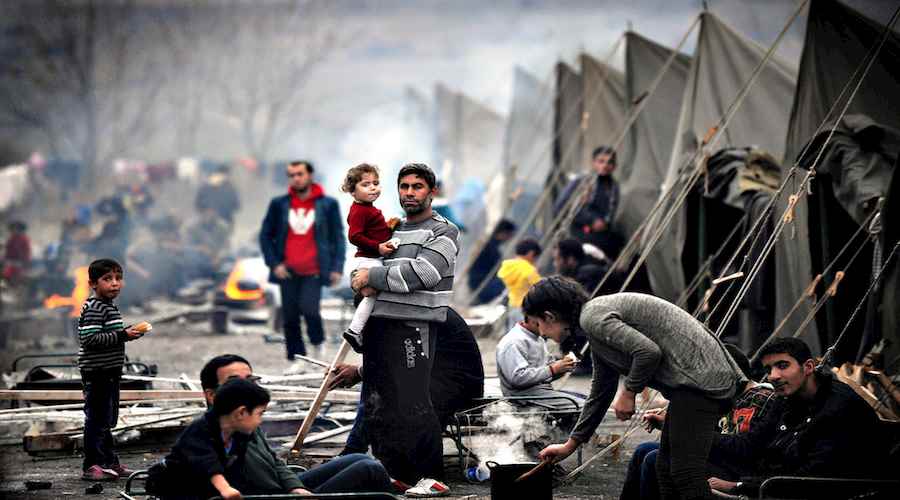 With the heightened refugee crisis that has reached unprecedented numbers in the last two years, a number of states have witnessed an increase in illegal migration, most notably the European Union. The EU has begun to search for new non-traditional ways in dealing with the crisis in order to mitigate its negative impact on their security and regional interests.

A number of new positions on the issue have proposed non-traditional ways to contain the crisis. Despite growing support and interest in the affected states, the positions are as yet only proposals at this stage that have not been transformed into action. The classical methods of dealing with refugees are to either repatriate them or provide asylum. These are still the only two mechanisms for dealing with the crisis.

What is most striking is that the emergency of non-traditional methods for dealing with refugees falls in line with the media’s search for alternatives. This search has shed new light on an old project named “Atlantropa”. This project was proposed by a German engineer, named Herman Sorgeil, in 1928 and it proposed to link the continents of Europe and Africa into one big continent named Euroafrica. The proposal included establishing dams at close points between Africa and Europe which would create wide open spaces, with the aim of turning Africa into a more hospitable place for European settlers, as well as reducing the chances of having major European powers entering into a new world war due to the very high costs of the proposed project.

Given that this project seemed very unrealistic, it did not garner much support among the states in question, yet its resurfacing at this current moment in time would indicate a search for new solutions to handle the refugee crisis. Instead of returning refugees back to their homes and preventing them entry into the EU, the Sorgeil project stated its aim of creating world peace and working to prevent the rise of further conflicts by adopting non-traditional methods of outreach between the continents of the world.

A Number of Initiatives

The most important of the non-traditional proposals to deal with the crisis can be summed up as follows:

1. Buying Islands to Repatriate Refugees: this is an idea that was put forward by a number of businessmen to settle the refugee crisis. The idea revolved around buying already existing islands in the Mediterranean and turning them into stable refuge points for migrants and refugees. It aimed to stop the continuing flow of refugees to the European states and even act as a midpoint in returning them to their home states.

Some islands have already been used to host refugees such as the islands of Lesious, Khayous, Samous and Leyros of Greece.  Yet this method faces a number of obstacles as Greece is facing a financial crisis that is weakening its ability to carry the burden of refugees. There is also no clear will from the EU on agreeing to this mechanism as it is simply reproducing the problem as the ambitions of refugees will not stop at these islands.

As per estimates from the UN, the capacity of the islands would not be able to sustain a very large number of refugees. The island Lesious, currently hosting over 5600 refugees, is not meant to hold more than 3600 refugees. Most of these islands also suffer from numerous problems, which became more apparent after fires broke out in the Moria camp on the island of Lesious in September 2016. It led to the evacuation of over 4000 refugees from the camp after almost 30% of the camp was destroyed by the fire.

2. Establishing Refugee Cities: this is an initiative that has been propagated by some EU member states, such as Hungary, with the aim of limiting the flow of refugees and migrants to Europe. The Hungarian Prime Minister Victor Orian stated on Sept. 25th, 2016 that the EU must establish a large city in Libya to receive the refugees prior to their arrival to Europe and that it should be run by the Libyan government.

Despite meaning that the execution of this model would halt the second largest route of migrants to Europe via the islands of Sicily and Lampodosia of Italy, there are a number of obstacles to the implementation of this initiative. Namely that the security abilities of the Libyan authorities are very weak and the ongoing armed conflicts between the parties in Libya will make it very difficult for the government of Libya to run the affairs of that city.

3. The Establishment of Safe Zones: this is a proposal put forward by the former British Minister of Development Andrew Mitchel, which calls for the implementation of Chapter 7 of the UN Charter on nations that are witnessing conflicts that export refugees. As such, some areas would create safe havens for refugees that would allow for humanitarian paths through neighboring states or via no-fly zones.

Yet this initiative has not been welcomed by the powers concerned with the refugee crisis in light of the increased scope of differences between those involved in the regional crises, which have led to an increased flow of refugees to EU states in an unprecedented manner.

4. Repatriation via Dictating the Routes Taken by Refugees: this would be achieved by redirecting refugees to certain areas, an initiative adopted by Australia where it transports refugees via boats to waiting areas that lie outside its border. These areas include the Island of Nawro in the Pacific and the Island of Manous in Papua New Guinea. They have also succeeded in striking a deal with Cambodia to take some refugees in return for $41 million dollars’ worth of aid.

What is of concern though is that the increased use of this type of initiative could lead to the rise of racism and illegal activities, such as the sinking of ships in the sea or bombing them to prevent refugees from reaching their shores.

From here, it can be said that these initiatives should only be considered temporary solutions to the problem, as they do not shape a permanent solution to the crisis. As per the data put forward by the High Council for Refugees, over 80% of those who migrate would like to return to their home countries later, and have no ambition to stay as refugees or in holding areas for the remainder of their lives.

Some of the initiatives that were put forward in this regard can be seen as election propaganda, such as the creation of a refugee island in neighboring European states, which was an idea adopted by the previous French President Nicolas Sarkozy who directed strong criticism towards Hollande for trying to welcome some refugees in France. Sarkozy affirmed the importance of placing a legal structure for Syrian and Iraqi refugees that would allow them to enter France as they are considered to be “War Refugees” and that they would return, as per his vision, to their countries once the security and political situations improved.

In conclusion, this shows that some European states are leaning towards changing their policies regarding refugees, especially since the increase of negative consequences have affected the political, security and social situations in those states. The rise of the far right wing in some of those states will lead to the creation of new initiatives that are non-traditional in dealing with this crisis, which seems more likely to continue in the coming phase, due to the lack of a settlement regarding the crises that have sprung up across the Middle East region.