Contradictory US Calculations for Yemen 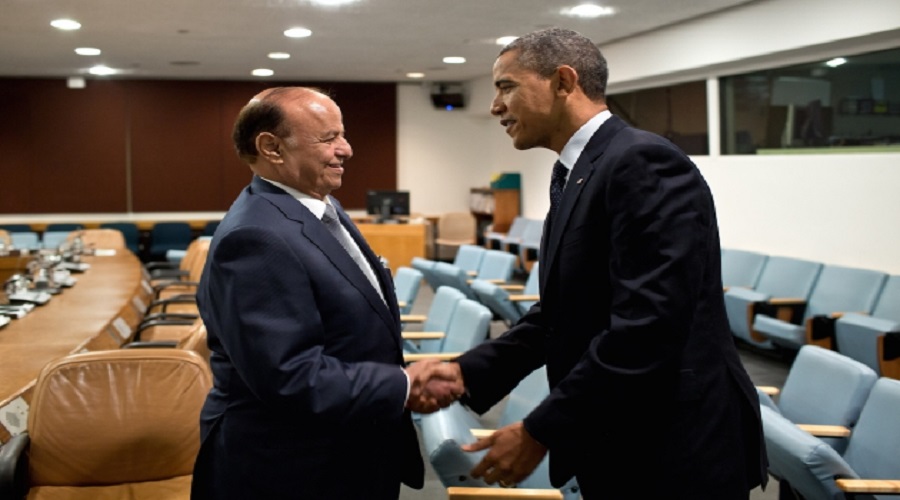 Contradictory positions characterize the US policy on the ongoing Yemeni conflict. While the US announced that it was reviewing its support for the Saudi-led Arab coalition in Yemen, after an alleged coalition airstrike on a funeral in the capital Sanaa, the US Navy bombed three radar installations in areas controlled by the Houthi group, which retaliated with a second missile attack in three days targeting the US Navy ship “USS Mason” in the Red Sea off Yemen's southern coast. It is the first time the United States has launched military strikes on areas in Yemen since the conflict broke out in March 2015.

Despite the fact the United States backs the government of Yemen's President Abdrabbuh Mansour Hadi as the legitimate authority in Yemen, the Obama administration often declares that the solution to conflict in Yemen will only be achieved through dialogue while refusing to intervene and get involved in an effective settlement of this conflict, which impacts the security and stability of the Gulf states.

The contradictions of the US policy on Yemen raise two essential questions: What are the determinants of US positions towards the Yemeni conflict? And will these contradictions continue into the next US administration?

Determinants of the US Position on the Conflict

The determinants of the current US administration's position on the Yemeni conflict stem from the domestic situation in Yemen as well as regional circumstances.

1. Creating a new enemy for al-Qaeda. Pursuing the same sectarian policies in Iraq, the US believes that the elimination of al Qaeda-affiliated organizations is possible only through the creation of a new enemy for Sunni Muslims. Finding a suitable candidate in the Shiites, the US has made persistent efforts to prepare Shiite groups to fight al-Qaeda and ISIS. Moreover, it views the Houthi group as a potential strong partner in the fight against al-Qaeda in Yemen.

2. Alliance of the Enemies. The US administration believes that the alliance between the Houthi rebel group and the now-ousted president Ali Abdullah Saleh has created a new reality in Yemen that is hard to overcome. Accordingly, the US is calling for a ceasefire without presenting any solutions to end the conflict. It has recognized that those who control the land and power in Yemen would prevail as the de facto authority mainly because of the rugged tribal areas- which dominated the ruling system in Yemen throughout history- are now entirely controlled by the Houthi-Saleh forces who have already consolidated their power in those areas.

3. The Weak Authority of the Legitimate Government. Despite its control of vast areas, the legitimate government is unable to impose its authority on the ground due to several factors, including: a lack of a budget to finance its activities, and disintegrating state institutions in many governorates which witnessed direct confrontations, and destroyed infrastructure and public services, all of which contributed to a power vacuum as well as the emergence of militias fighting each other over influence. Overall, these circumstances made the US believe that a solution to the conflict and the reinstating security and the legitimate government's control of all Yemen territory is not in sight, but rather at least in the foreseeable future.

4. Multiple Groups in the Southern Movement. The US recognizes that the Southern Movement groups, seeking secession from the north, are incoherent and have various regional, ideological and sectarian affiliations. This prevents the legitimate government from establishing its control on the ground. Overall, the conflict is being further complicated because of the complex structure of the involved groups.

1. Historical Alliance with the Arab States of the Gulf. Gulf states have been historic allies of the United States since they first emerged as modern nation-states. When the policies of the US and the Gulf states do not fully converge, they do not collide. This is evident in the US support for the intervention of the Saudi-led Arab coalition in Yemen. The US even engaged in intelligence cooperation with the coalition and provided it with some 45 military experts who were withdrawn recently.

However, this move does not mean Washington has ended its commitment to support Riyadh in its war in Yemen. After Congress had passed the Justice Against Sponsors of Terrorism Act (JASTA), many US officials stressed that the recent US positions are temporary and will not affect the US strategy in the long run because, in its view, guaranteeing and safeguarding its allies' security is an essential guarantee of its national security.

2. Threats to International Shipping Lanes. Geographically, Yemen resides on the strategic Bab Al-Mandeb Strait, one of the most vital international shipping lanes in the world. The US administration believes that the on-going conflict in Yemen poses a threat to international navigation. The October 1 attacks on an Emirati vessel, claimed by the Houthi group, and the October 10 attack on a US Navy destroyer, launched from coastal areas controlled by the Houthis, validate concerns shared by the US and other states. Egypt, in particular, is concerned about such risks which could impact navigation security in the Suez Canal.

3. Yemen's Proximity to Gulf Oil Fields. Since its discovery in the region, oil and its steady supply to the US has been a major concern for US foreign policy. Concerned by the spread of conflict and potential impact on oil supplies to global markets, the US has been supplying Saudi Arabia with modern weapons to protect its borders with Yemen from breaches.

4. US-Iran Rapprochement. Some view this rapprochement between the United States and Iran- especially after the conclusion of the nuclear deal and Iran's agreement to allow international oversight of its nuclear plants and confine its nuclear program to peaceful purposes- has helped in easing tensions that dominated their relationship before the deal. Therefore, the US appeasement policy towards the Iran-linked Houthi group reflects this position.

US Administration's Vision for a Solution to the Conflict

Despite the ongoing conflicts in Yemen, Syria, Iraq, and Libya, the interests of the United States have not been directly impacted due to its secure oil supplies, presence of military ground troops, and warships deployed to the seas of the region as well as the surrounding oceans. That is why the US views the regional conflict as one way to weaken its rival groups opposing their interests and decrease their threats to its national security.

The US believes that its interests become more secure through a controlled chaos approach by pursuing a policy built on the so-called Creative Chaos Theory. US policies rely on perpetuated conflicts in the Middle East region and the Arab states surrounding the Gulf. Accordingly, the US allows Iran to play a role in the region but would not take the necessary measures to secure Gulf states. Thus, Gulf states, recognizing a real Iranian threat, are enforced to adhere to their alliances, on the one hand, and secure Israel from regional developments, on the other.

Saudi Arabia sought help from Russia during this crisis and even signed an arms deal with Moscow. This reflects the Kingdom's resentment at what it views as an act of US negligence concerning the conflict and even as identification with escalations in Yemen. However, the Kingdom recognizes the fact that it and other Gulf states do not trust Russia completely, and believe it can never become a substitute to the American ally.

The US administration's policy towards the conflict is viewed as ambivalent and undefined. This is reflected in a recent proposal from Secretary of State John Kerry that focused on implementing a ceasefire, and facilitating delivery of humanitarian aid without addressing the essence of the conflict or finding a reasonable solution that is acceptable by all parties.

The Next Administration's Vision for the Future of the Conflict

On November 8, a new US president will be elected. Americans will choose between Democratic presidential candidate, Hillary Clinton, and Republican candidate, Donald Trump, who have different programs and visions for US foreign policy. The candidates' expected views about foreign policy can be seen by their adopted positions over the course of their campaign.

Based on her electoral campaign and statements on foreign policy issues regarding the future of the Middle East, Clinton is expected to adopt a policy that is largely similar to that of President, Barack Obama. She gained experience in the conflicts of the Middle East while serving as Secretary of State for four years under Obama's first term during which she played a key role in forming the country's foreign policy. Moreover, because she has experience and understands the situation in the Gulf region, Clinton's policy is expected to preserve alliances with these states and avoid any confrontations with them over ending the conflict in Yemen in a manner that is not in line with their views. That is why we should not expect significant changes in the current US policy.

If the Republican candidate wins the elections, he is expected to introduce drastic changes to US foreign policy in accordance with the political agenda he declared. Donald Trump believes that the declining role of the United States in the world and the Middle East, in particular, stems from the weak foreign policy pursued by President Obama. Trump, who pledged to wage war without mercy on terrorist groups and prevent Muslims from entering the United States, would fuel the conflict by intervening and aligning with one party against the other.

We should not expect a solution to the conflict in Yemen if Trump becomes president, and especially if he persists to be hostile towards Arabs and Muslims. His policy would not possibly go in line with the Gulf states, raising their concerns and maintaining their current sense of tension and relative instability.

In conclusion, no clearly-defined US vision for a solution to the conflict in Yemen is expected to be set despite the fact that the US is in full control of this conflict. That is, the US maintains its relations with the former president, Ali Abdullah Saleh, the Houthis on the one hand, and a strong relationship with the Saudi-led coalition on the other. It is, therefore, the only power that is capable of intervening and ending the conflict if it is willing. However, it is evident that the US policy will continue to set out proposals as part of a policy of pacification for every significant event that, in its view, would take the conflict out of control, while abstaining from any effective intervention that would end the conflict for good.

Changing the nature of US involvement in the Middle East

The US is not only planning to scale back on direct military intervention...