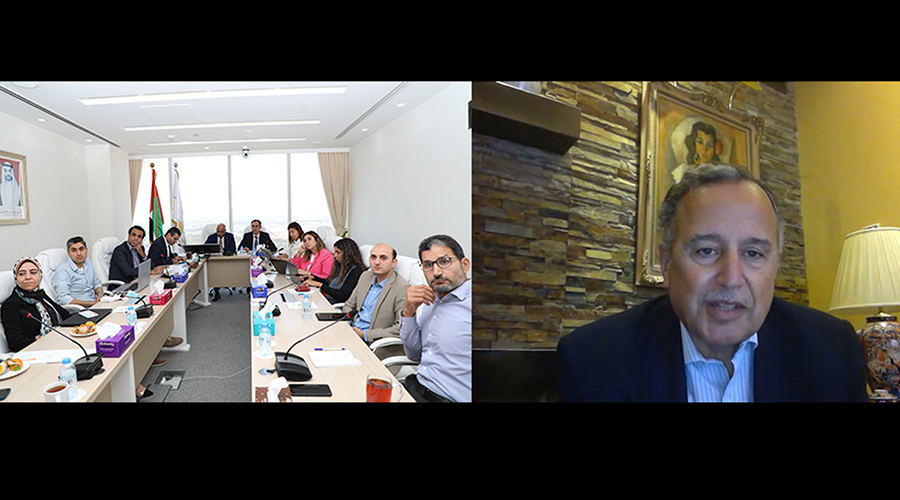 Earlier this month, Future for Advanced Research & Studies centre hosted the Egyptian former Minister of Foreign Affairs, His Excellency Nabil Fahmi at a conference where he discussed his outlook on the American-Gulf relations. Mr Fahmi, Founding Dean of the School of Global Affairs and Public Policy at American University in Cairo joined the session remotely and covered a range of topics amid reports of US President Joe Biden visiting the region soon.

Facilitated by the centre’s head of the American Studies programme, Mr Hussam Ibrahim, the conference highlighted the recent global developments in politics, their impact on the region, and how a visit by President Biden could get his countries relations with the Gulf back on an even keel.

The world has been taken by a storm: a war in Ukraine and a pandemic that has disrupted global supply chains. Granted, the war will leave a long-lasting mark on the world’s political map. Here in the Middle East which has been experiencing its own political unrest, global turmoils have been deeply felt across economic, social, and political vectors.

It has become clear that the role of global powers in regional conflict is declining. The US no longer can afford to fully engage in regional issues across the world. By comparison, the Cold War period witnessed two global powers between which states could shift their alignment based on their needs. Western powers have become less inclined to getting involved in regional conflict to tip states over into one camp versus the other.

2. Not all global powers are equally invested in the Middle East:

The current three powers (i.e., the US, Russia, and China) do not mirror each other’s interest in the Middle East. On the one hand, the region is no longer America’s priority it once was, though it retains some significance especially when it comes to energy as the US becomes one of the world’s biggest oil producers. Also, America’s interest has shifted to the Indo-Pacific region where China’s influence is on the rise.

On the other hand, China and Russia’s attention to the region is limited to economic interests rather than security. Russia’s role also is quickly receding as the Ukrainian war stretches.

The US might want to take a step away from the region but not to remove itself entirely, for any global power would keep an active presence in regions across the world. Understood in this view, Biden’s administration aims to manage its relationship with the region’s countries within a new framework. The Middle East is important but not a top priority anymore. As such, the US would not commit itself into another costly war protecting its interest there; it wants to de-escalate tensions, promote cooperation and alliance, and promote a policy of de-escalation.

America’s diplomatic relations with the Arabian Gulf states has been nothing short of rocky. The US recognises the importance of the Gulf as a strategic ally, but it has made miscalculations that undermined its relationships with historical allies.  Yet the war in Ukraine has revealed the strategic importance of the Gulf region. The weight of Gulf Arabian states on international politics has pushed the US to take a second look at its relationship to the region. Thus, Biden’s visit, which hasn’t been officially announced just yet, comes at a key turning in the US-Gulf relations.

As mentioned above, the current US administration is sticking to a policy of de-escalation as it continues to negotiate an agreement with the Islamic Republic of Iran. An important priority, sticking a new nuclear pact with Iran would no longer have the potential to build nuclear weapons. Though it seems that the Iranian nuclear programme has eclipsed other issues on US foreign agenda in the region, including Iran’s energy production and international exports – for the time being, at least.

Future for advanced research and studies