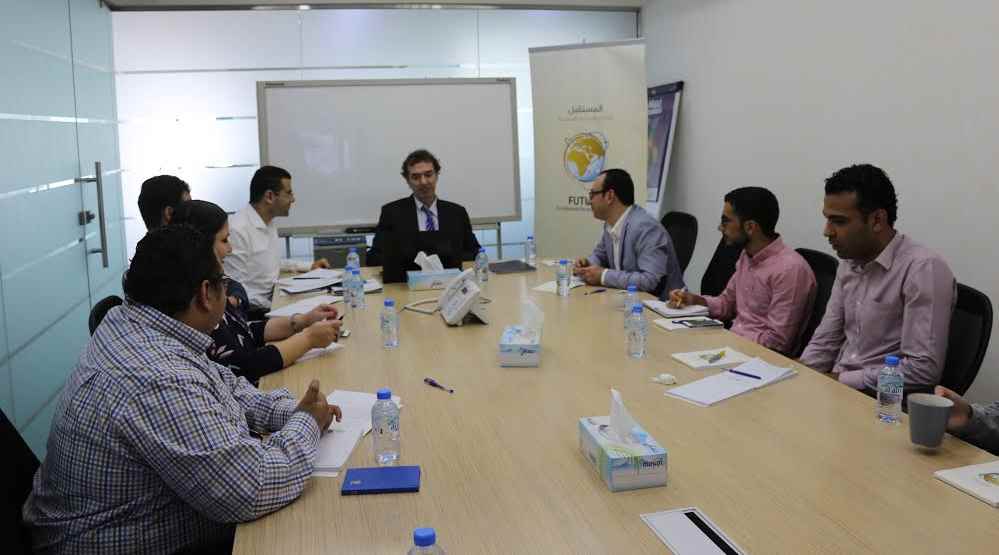 Failure of actors in conflict zones to present an adequate vision for ending civil conflicts, or propose plans to rehabilitate areas liberated from terrorist organizations, was the main issue addressed in a workshop in which Future for Advanced Research and Studies (FARAS) hosted Dr. William Gueraiche, Associate Professor at American University in the Emirates (AUE) on November 2, 2016, to shed light on the political, economic and security implications of this issue.

At the workshop titled "Challenges of Rehabilitating Territories Liberated from Terrorist Organizations," Dr. Gueraiche attributed rehabilitation processes’ failure to several factors. He cited the lack of a political model that can be applied in these regions, absence of objective foundations for an “Arab Marshall Plan” - similar to the European Recovery Program, which was an American initiative to aid Western Europe, in which the United States gave over $12 billion in economic support to help rebuild Western European economies after the end of World War II- as well weakening chances for achieving transitional justice, all of which are considered prerequisites for any plans to rehabilitate affected areas.

Dr. Gueraiche argued that the Marshall Plan represents a primary referential model for rehabilitation in liberated areas through establishing democratic rule, economic development and transitional justice as the three pillars of the rehabilitation process. The absence of these pillars in conflict zones in the Middle East led to a failure of settlements and reconstruction efforts. What deepens this crisis of lack of vision for reconstruction in liberated areas is that the democratic experience in a number of Middle Eastern countries has failed to establish peace.

Gueraiche cited that Paul Bremer, the American Coalition Provisional Authority administrator in Iraq in 2003, had announced that elections and democracy would stabilize Iraq. It was then widely believed in the West that the United States might succeed in Iraq, but now, the situation is entirely different, and no single Western diplomat believes that democracy can serve as a mechanism for restoring stability to areas liberated from the grip of terrorist organizations and armed non-state actors.

The invasion of Iraq has totally changed the perception that democracy could be a solution to the crises in the Middle East. Gueraiche stressed that the civil war in Iraq broke out when the parliamentary elections were held in 2005, meaning that instead of being a way of achieving stability in the country, it exacerbated tensions between the different Iraqi sects. Instead of attaining a democratic rule, the election was utilized by the Iraqi Shiites to establish dominance over and seek revenge from Sunni Iraqis. This eventually paved the way for the emergence of Al-Qaeda in Iraq (AQI) and, at a later stage, gave rise to ISIS.

Gueraiche noted that there is a close connection between economic development and stability in post-conflict stages. In October 2016, former US commander in Afghanistan General John R. Allen called for a new economic initiative for the Middle East – much like the Marshall Plan for Europe after the Second World War – to reconstruct conflict zones using the German and Japanese experiences as a guide.

Initiating development, for Gueraiche, requires the establishment of peace and stability, a prerequisite that is missing in Middle Eastern countries, even after the conclusion of decisive military battles against terrorist groups. Instability would constantly linger, lead to a vicious circle of revenge attacks between different sects, and perpetuate violence albeit in a slower pace, and consequently preventing the fulfillment of objective circumstances required for bringing about development. In light of such a situation, international aid would be channeled mainly to fulfill the basic needs of the affected population and not to aid in development.

Drawing on the current situation in Iraq, Gueraiche refers to yet another reason for faltering development in areas liberated from terrorist groups: rampant corruption. The hurdle would block any attempts by international donors, organizations or investors from investing in the region; furthermore, if oil revenues are not used to initiate development, Iraq will continue to suffer from a deteriorating economic situation.

In addition to political and economic factors, Gueraiche argued that peace requires national reconciliation, which entails just trials for perpetrators of crimes. As evidenced in the experiences from WWII, prosecution of war criminals will always trigger debates about which individuals should be trialed before which courts and based on what charges?

One of the solutions for establishing reconciliation could be standing trial before the International Criminal Court. However, this depends on the acceptance of the court’s verdict from the international community and the domestic and regional parties of the conflict. Moreover, the inability of this court to prosecute war criminals in previous cases raises doubts about its effectiveness.

Some, including Gueraiche himself, believe that an agreement can be reached about the setting up of special courts to prosecute those accused of committing war crimes in Syria and Iraq, which could pave the way to national reconciliation if all perpetrators are brought to justice.

However, there remains the risk of such courts being disabled and powerless as evidenced in the Special Tribunal for Lebanon, which was established in 2009 by the UN Security Council to carry out the investigation and prosecution of those responsible for the 2005 assassination of Rafic Hariri, the former Lebanese prime minister.

To overcome the obstacles obstructing transitional justice, Gueraiche proposed a peace conference similar to the Helsinki Conference, which originated in early Cold War discussions between the United States and the Soviet Union. Such an initiative culminated in the opening of the formal Organization for Security and Cooperation in Europe (OSCE) in July of 1973 that aided in the de-escalation of Cold War tensions in 1975. However, the primary challenge in applying said proposal in the Middle East is who is going to host such a conference and which parties will participate.

Gueraiche believes that the failure of the democratic experience and lack of economic development and transitional justice does not only indicate a vague future for liberated zones in the post-conflict stages, but also shows the absence of any practical alternative, where for the first time after WWII, the consequences of the end of a conflict does not vary much from the effects of continued conflict.

Furthermore, Gueraiche believes that communities that are liberated from terrorist groups and armed non-state actors will be once again susceptible to extremism due to a lack of a just system of governance that is inclusive of all sects and segments of society as well as a lack of economic development, in addition to failure to prosecute or arrest those who committed crimes. Therefore, the roots of extremism are not likely to disappear even if ISIS is eliminated.

Gueraiche proposed two main scenarios for the future of the Middle East:

The first scenario involves the preservation of the unity of the state in both Iraq and Syria, and address the consequent rising sectarian tension between Sunnis and Shiites. The second scenario proposes the establishment of an independent Kurdish entity, which will exacerbate the ethnic conflict between Arabs and Kurds. In either situation, no single party to the conflict can dominate the other party alone through military means, which will lead to instability spreading in both states and neighboring countries.

Gueraiche views that liberating Syrian and Iraqi territory from ISIS will lead to foreign fighters escaping to safe havens that are not under security control, such as Afghanistan and Libya, or even returning to their home countries to pose threats to peace and security in these countries. A third alternative for foreign fighters fleeing Iraq and Syria is to carry out random terrorist attacks to spread as much chaos and unrest in the region as possible.

In conclusion, Gueraiche stressed that the unpredictability of transitions in the Middle East does pose a dilemma. However, two individual trends stand out. The first being the growing role of non-state actors due to the failure of all major state actors to come up with clearly defined strategies to end current crises. The second being the establishment of safe zones that would be surrounded by areas of violent turmoil. Safe zones would isolate themselves from the surroundings in a way that suggests that liberated zones would not be rehabilitated and would instead be neglected and left to spreading violence.