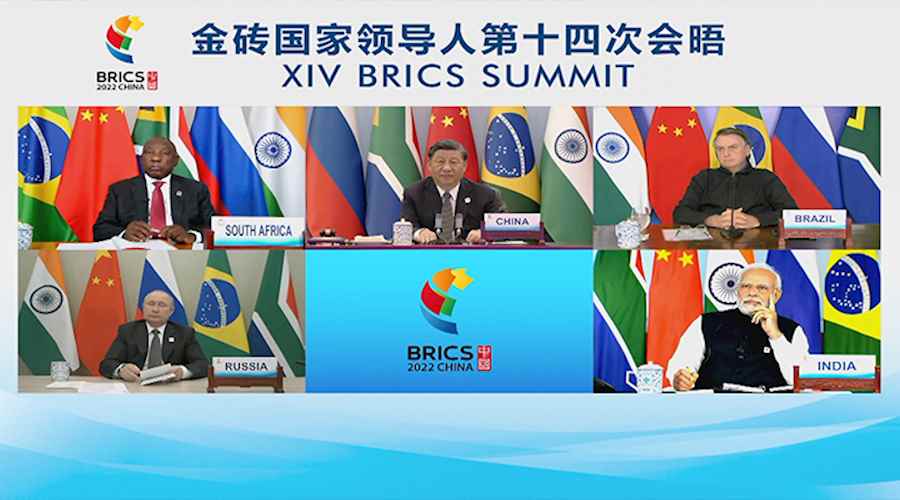 The 14th BRICS summit concluded on June 24 amid Western sanctions on Russia and rising tension between China and the US over Taiwan. The two-day event took place via video and was hosted by Beijing.

The Summit took place amid rising global conflict: the ongoing war in Ukraine, and the heightened tension between China and the US. The global economy has suffered deeply as a result. China is increasingly anticipating that the US may resort to economic sanctions, which implications could be outlined as follows:

The BRICS summit took place to the rhythm of war drums. The West has been quick to implement draconian and unprecedented economic sanctions, which the West had hoped would lead to the collapse of Russia’s economy. The West’s confidence in the outcomes of its punitive measures was so strong that US President Joe Biden said that “Russia would pay a severe price” for “monstrosities done to the Ukrainian people”. As for China, Biden noted that economic sanctions would be the price China would have to pay, if Beijing attempted to forcibly take over Taiwan.

Biden’s statements are the latest in a series of reproving exchanges between Washington and Beijing over Taiwan. In response, President Biden has said he would be willing to use force to defend Taiwan, but China said no global power could stop Beijing from reunifying the Island under the “One China Principle.” China may be banking on BRICS in facing possible economic measures by the West who continues to endorse US dollar as the world’s reserve currency, control of SWIFT, or maintain international monetary regimes.

Perhaps inadvertently, Western sanctions have accelerated Russia and China’s drive to break away from the global economic system. The latest BRICS summit clearly reflected a growing sentiment among state members to create a new and alternative global economy to the existing one under US hegemony. Russian President Vladimir Putin noted that the West wants to change the rules of the game it established now that China has outdone its western rivals.

BRICS countries make up nearly 45% of the world’s population and cover more than 27% of its terrestrial area. The combined GDP of BRICS exceed that of G7, which all are industrial countries.

At the recent BRICS summit, there was one message that came out loud and clear: the grouping intends on becoming independent from the West and is ready to chart its own course. The state members discussed five key policies, which are:

Over the years BRICS extended invitations to friend nations, exemplified in the BRICS+ initiative which was attended by Egypt, Ghenea, Mexico, Tajikistan, and Thailand, among others. During the most recent summit, China stressed its desire to expand the association to include new members, which would help realising the 2030 agenda for sustainable development.

President of the BRICS International Forum Purnima Anand announced, on July 14, that Egypt, Saudi Arabia and Turkey are interested in joining the BRICS group. “During the 14th BRICS leaders’ summit virtually held on June 23-24, China, Russia and India deliberated the three countries’ interest in joining the group,” Anand said in an interview, adding that “it is a good step, because expansion is always positively perceived; this will clearly increase the influence of BRICS in the world.”

Another announcement following the summit was the commitment of member states to adopting a new basket of reserve currency. Alluding to the US, President Putin said that the world needed a new reserve currency, for in his view the West is printing fiat money uncontrollably, driving debts to unprecedented levels. Realising the adverse effects of fiat money and the associated risks of relying on US dollar, BRICS states are looking for more sustainable alternatives.

For instance, The Wall Street Journal reported March 2022 that Saudi Arabia considers accepting Yuan instead of dollars for Chinese oil sales, a strong indication that wheels are well in motion.

The Chinese currency, moreover, has a strong potential to become a world reserve currency: China is one of the largest trade partners for many countries. Also, the International Monetary Fund since 2015 has added the Yuan to its reserve currency basket of US dollar, Euro, Yen, and Sterling.

An agreement was reached among BRICS reserve banks to deepen mutual understanding and facilitate cooperation on reserve currencies and foreign exchange.

Chinese media have been floating reports that China is working on a ‘dollar-free’ alternative to the Belgian service that is effectively controlled by the US. Moreover, President Putin said the Russian equivalent of the SWIFT system, SPFS, has been made available to BRICS members; although, member states are yet to agree on using the Russian systems instead of the current one. Eventually a switch to the Russian system could happen given talks has been ongoing since 2019.

Though BRICS are committed to forming a new global economic bloc, parallel in shape and form to the G7, their success depends on two key factors, which are:

All BRICS countries adopting similar positions on Russia’s operation in Ukraine; none condemned the operation, rejected Western sanctions, and called upon Russia and Ukraine to dialogue. Yet BRICS approach to China may be slightly different, for India is a member of Quadrilateral Security Dialogue (QSD), a strategic security dialogue between Australia, India, Japan, and led by the United States, which aims to restrain China in southeast Asia and the Indian Ocean. India’s involvement in QSD may shake BRICS’ uniformity in future.

BRICS efforts to attract new members is being met by a G7 opposing movement of engaging those countries closer to the Western camp. Countries such as India and South Africa, two BRICS country members, alongside Argentina (seeking to receive full membership of BRICS), Senegal, and Indonesia, were invited to attend the G7 summit held in Bavaria in hopes of changing the perception that Western group is more than just interested in the Global North.

This effort by G7 reflects an intent to expand the group in a bid to contain China’s influence. To this effect, more than USD 600 billion including USD 200 billion by the US alone, have been committed to fund World Food Programme (WFP)’s infrastructure projects in Developing countries.

Nevertheless, doubts have surrounded the implementation of these commitments; the US had announced similar initiatives in Africa that were never delivered owing to the unexpected upshots of Russian sanctions, which led to high inflation rates globally.

We may conclude that BRICS are seriously considering strategies to break away from Western control over global economy, by finding new alternatives to the US dollar as the world’s reserve currency, and instigating change to the world monetary regime. Though, steps are yet to be taken in that direction. Meanwhile, G7 have begun reacting to those reforms, developing what may be considered counter measures to contain BRICS plans, through investments in developing countries who may be swayed away from joining BRICS in future.