Shaping the Gulf City of Tomorrow 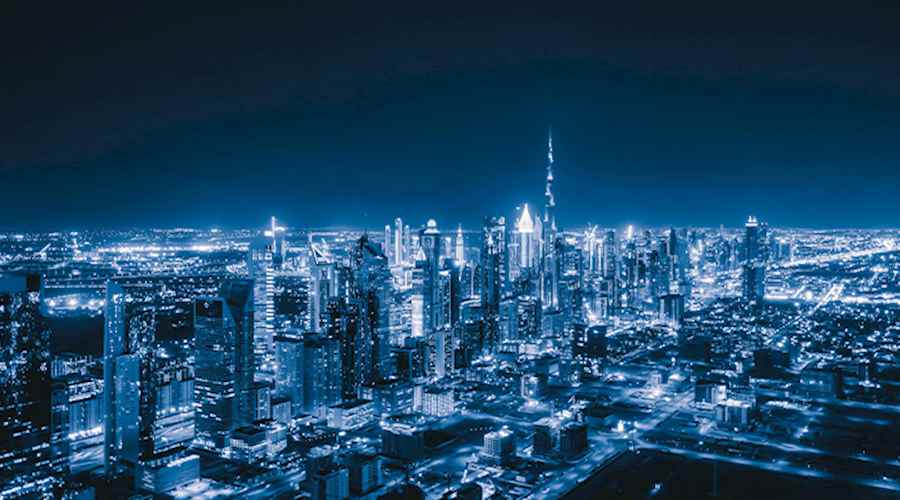 As Gulf cities diversify their economies, megaprojects and megaevents dominate the regional landscape to attract talent, tourism, and investment. Inspired by Dubai’s remarkable growth over the past three decades, global hubs are adopting a similar model of economic development driven by visionary leadership, grand plans, and economic clusters. From Jebel Ali Port in 1979 to Emirates Airline in 1985 and Palm Jumeirah in 2006 to Burj Khalifa in 2010, Dubai has built modern wonders and leading companies in addition to world-class centers for business and finance, aviation and logistics, education and healthcare, culture and sports, and media and the internet. Beyond transformative infrastructure, global cities such as Dubai aspire to city-wide transformations, namely the creation of smart cities that leverage what technology promises of greater possibilities and efficiencies for a better future.

Contextualizing Cities and the Future

Cities are at the forefront of reshaping the region’s economic future. Globally, they are also rising in importance as key players of sustainable development, given that more than 80% of global GDP is generated in cities, and by 2050, 70% of the world population will live in them. However, high confidence in cities is historically a modern phenomenon. Before the mid-1800s, living in cities was not desirable as they were ridden with dirt, disease, and crime. In time, advancements in medicine and technology allowed cities to grow and become centers of opportunity. Today, with the spread of COVID-19 and other cross-border threats, cities faced their largest existential crisis in recent times amid disillusionment with high-density living. Future pandemics, coupled with climate change, population growth, inequality, and other trends, are pressing cities to evolve again. As before, technology is a key feature of the next-generation city, this time under the banner of the smart city.

Despite its pervasiveness, there is no consensus on what defines the smart city; in fact, some may argue that cities are already smart. Nonetheless, the common denominator of most conceptions is the use of information and communications technology (ICT). Although we lack a clear definition of the smart city, there are clear utopian visions for what it can promote, such as synergy, sustainability, and modernization. After all, the smart city is, at this stage, primarily the sales pitch of corporations and consultancies alike and the flagship project of mayors. To ensure that smart cities live up to the significant investment, they must also be human-centered. Of global smart city projects, Dubai stands out in its focus on people.

Marking 15 years of digital transformation in Dubai, starting with the creation of Dubai Internet City in 1999, Dubai e-Government in 2000, and UAE m-Government nationally in 2013, His Highness Sheikh Mohammed bin Rashid Al Maktoum launched Smart Dubai (now Digital Dubai) in 2014. Digital Dubai’s mandate transcended digital transformation; aside from launching 100 smart initiatives and 1,000 smart services, its mission was to treat technology as a means to an end: “to make Dubai the happiest city on earth.” Dubai started achieving this vision by partnering with communities and the private sector. Services were being developed with people’s input, such as the Happiness Meter that captures customer experience metrics. Valuable on-demand data is summarized in a dashboard for decision-makers, where insights help Digital Dubai, government entities, and partners continually improve services. As Dubai’s example shows us, the smart city should aim to leapfrog the quality of life in communities.

After two decades of designing smart cities, we may finally reach an inflection point. With the rise of the digital economy, the availability of big data, the adoption of 5G, and the smartening of infrastructure, smart cities will no longer be an aspiration. This also applies to concepts such as the “metaverse” lately popularized by Facebook, where humanity occupies a digital plane of existence powered by augmented and virtual reality. Interestingly, discourse on smart cities and the metaverse is dominated (if not initiated) by Big Tech. The private sector plays an indispensable role in implementing smart cities, but government and the people should assume an equal role in designing them—they are not passive customers. As smart cities mature, leaders must ensure that corporate visions and agendas do not undermine citizen needs and expectations. After all, what is a city without its people?

There are several areas for aspiring smart cities to be human-centered. The first and foremost consideration is that of inclusion, and that is to acknowledge people’s agency. After all, a smart city is one that attracts and mobilizes human capital, turning to its smart citizens for solutions and deploying technology purposefully. Technology is not the ultimate solution to urban challenges; many situations demand culture and behavior change, for instance. Technology’s impact is limited when it is not implemented effectively and when there are fundamental barriers such as red tape and a lack of multi-stakeholder collaboration. When designing cities for people, we should account for their values and aspirations, not just organizational objectives. We must ponder aspects such as the effect of technology on physical, mental, and social wellbeing; the protection of personal data and privacy; the security vulnerabilities of smart cities; and last but not least, the local context to avoid cookie-cutter solutions. This can be achieved when governments have a working knowledge of the technology they are dealing with and use their convening power to bridge the gap between technologists, urbanists, and people. In addition, governments wishing to upgrade their city need to upgrade governance as well. Policies and regulatory frameworks need to adequately address emerging technologies to realize their benefits and limit their drawbacks on people.

Smart cities will play an important role in regional aspirations for economic diversification and the global quest for sustainable development, as we mitigate and adapt to climate change and other trends. However, smart cities will not live up to their promise if they are not human-centered. When planned thoughtfully and designed inclusively, smart cities will unlock new possibilities, and the key to achieving that is asking the right questions, starting with: Who are we building our smart cities for?