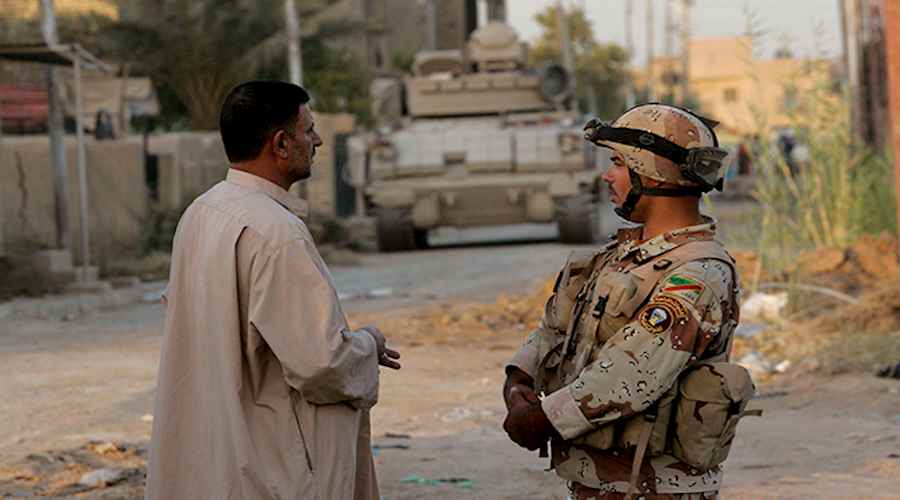 On October 26, Diyala province in Eastern Iraq witnessed a series of terrorist attacks, which were carried out by ISIS, leaving about 15 casualties, killed or injured, most of whom were Shi’ites. On the other hand, gunmen affiliated with the Popular Mobilization Forces (PMF) launched an attack targeting the residents of a Sunni village in the same governorate. Moreover, Shi’ite clans carried out reprisals against Sunni villages in Northeast Baqubah, in retaliation for the killing of their children by ISIS.

The key reasons for and motives behind these recent sectarian incidents in the Iraqi Diyala province may be portrayed as follows:

Although the military operations in Diyala have not stopped, they are often limited in their effectiveness, due to weak intelligence information and the lack of logistical supplies such as night-vision goggles and thermal cameras available for usage by security members. ISIS also takes advantage of Diyala's openness to the Hamrin Mountains, which extend to the governorates of Salahuddin and Kirkuk. This provides a safe haven for ISIS to carry out the terrorist operations, and then hide in these mountains, making it difficult for the Iraqi security forces to fully combat this terrorist organization from the region.

ISIS is exploiting the political tensions in Iraq following the announcement of the results of the recent parliamentary elections, by targeting the Shi’ites to push their militias to respond or even to get them involved in sectarian displacement operations. This aggravates sectarian tensions, creating a favorable environment for recruiting new supporters for this terrorist organization.

It seems that ISIS succeeded in achieving some of its goals. Following this attack, the villages of Nahr al-Imam, Northeast of Baqubah, witnessed a mass displacement of people towards al-Basateen and neighboring areas, after Shi’ite clans carried out reprisals against Sunni villages in Northeast Baqubah. Mortar shells were also fired against Sunni areas, leading to the displacement of about 227 families from Miqdadiyah district over the past few days.

Voices calling for the start of demographic changes began to rise, with the possibility of replicating the experience of Jurf al-Sakhar in Babylon Governorate (100 km South of Baghdad), where Sunni residents were displaced, given that it is adjacent to two provinces sacred to Shi’ites, namely Karbala and Najaf.

Displacement and demographic changes are among the problems that the governorate suffers from, and which successive federal governments have failed to find radical solutions to since 2003, since Shi’ite factions were involved in the displacement of some of its Sunni residents. The PMF, joined by a number of Shi’ite clans in the province, carried out campaigns of displacement in the villages of Miqdadiyah district, the center of Abu Saida district and the surrounding villages, as well as bombing dozens of mosques and religious schools. The previous governments failed to take any measures to stop these operations.

It should also be noted that the Shi’ite factions, particularly the Badr Organization led by Hadi al-Amiri who is affiliated with Iran, prevented the return of the displaced Sunnis, who are residents of camps in Kirkuk, Erbil and Sulaymaniyah, despite the lapse of a long time since their areas were cleared of ISIS power.

3-     ISIS’s revenge against the security services:

Through its recent terrorist attacks, ISIS sought revenge for the continuation of military and security operations against it recently, one of which resulted in the arrest of Sami Jasim, the finance official and deputy to former ISIS leader Abu Bakr al-Baghdadi, following an intelligence operation carried out outside Iraq, leading to his arrest and return to Iraq.

Iranian-backed militias have been the key beneficiaries of the prevailing sectarian climate in the wake of Iraq’s expulsion of ISIS from the vast areas it controlled in Northern Iraq in 2018.

With the outbreak of the October 2019 protests, which came as an uprising against the influence of Iran and the class of politicians associated with the Iranian Revolutionary Guards on Baghdad, the influence of these groups regressed, which was evident in the last parliamentary elections of 2021. Thus, Iran and its affiliates realized that the prevalence of the sectarian climate guarantees it and its allies’ potential influence.

Moreover, the outbreak of sectarian killings will cause clear embarrassment to the government of Iraqi Prime Minister Mustafa Al-Kadhimi, as it will appear incapable of controlling the security situation, which will enhance dependence on the Popular Mobilization militias and boost its societal position. Therefore, the pro-Iran militias hastened to intensify sectarian tensions by carrying out attacks and sectarian displacements against the Sunnis.

On the other hand, there are previous indications of Iran's involvement in supporting ISIS. Last June, Muhammad Hussein, who was responsible for bringing in car bombs and transporting ISIS families from Syria to Iraq, admitted to a coordination between the Iranian militias and the Revolutionary Guards with ISIS on the Syrian-Iraqi border. This implies that Iran may resort to using the terrorist card, pushing ISIS to escalate terrorist operations, and then presenting the Shiite militias as the only forces capable of confronting it.

Furthermore, Iran may seek to exploit these sectarian incidents to carry out sectarian displacement against the Sunni Arabs, specifically since Diyala province shares a land border with Iran over a distance of 240 km, and represents a gateway for visitors to the Shi’ite holy sites in Iraq and Syria. Diyala is also a land corridor for Iranian weapons and militants to cross into Syria or Iraq.

The government of Iraqi Prime Minister Mustafa al-Kadhimi realized the gravity of the developments in Diyala, and the attempts to exploit it by ISIS and Shi’ite militias. Therefore, it sought to adopt several measures to prevent sectarian tensions, which may be pointed out as follows:

Al-Kadhimi dispatched senior political and military leaders who stayed in that inflamed area for several days to reinforce security and conduct dialogues with the local and tribal community there, with the aim of preventing sectarian escalation.

Al-Kadhimi sought to change the provincial police chief and sent large forces there to impose security and prevent displacement, as the Iraqi security forces imposed a night curfew in Muqdadiya district, in an effort to contain the sectarian escalation and halt the displacement operations.

On November 1, al-Kadhimi called on school students not to listen to the headlines of sectarianism and racism, stressing that Iraq is going through difficult circumstances. However, he reiterated that the Iraqi people are strong, and they seek to overcome this ordeal. He also stressed that they are all Iraqis, and that they are all equal and have the same rights and duties. Perhaps this message, which came in the wake of the sectarian events in Diyala, confirms that al-Kadhimi is keen to prevent the use of the card of sectarianism to achieve limited political purposes.

In conclusion, the developments of events in Baqubah reflect how Sunni and Shi’ite forces are pushing to revive sectarianism in Iraq, in a desperate attempt to thwart the results of the Iraqi elections, which clearly revealed the tendency of Iraqis to support national parties over their sectarian counterparts. This indicates that the Iraqi government is still facing difficult challenges in its attempts to recover from the repercussions of previous wars, and to combat any attempts to revive sectarianism.