The Reappearance of Consensus

Implications of Israel-Russia agreements over Syria 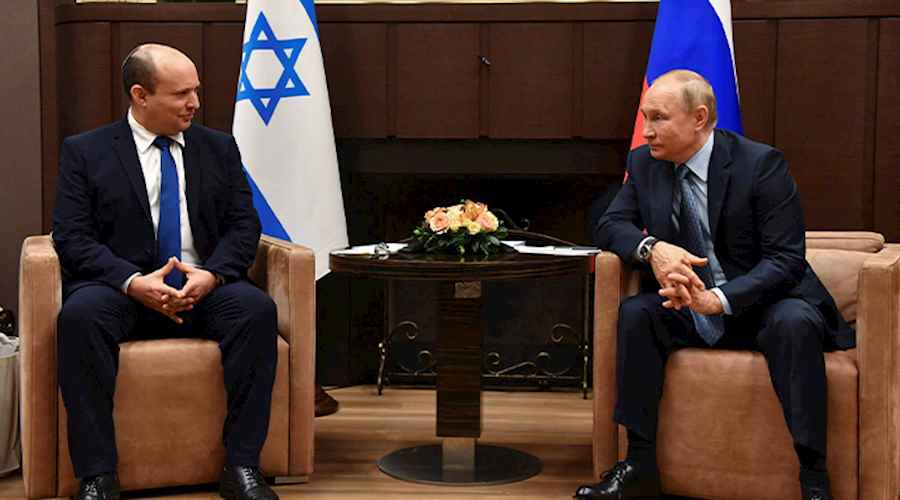 Russian President Vladimir Putin and Israeli Prime Minister Naftali Bennett held their first face-to-face talks on October 22 in Sochi, Russia. The summit talks, called by Putin, were slated for only two hours but lasted for about five hours, reflecting the two sides’ interest in enhancing coordination about several common issues, and warming up the Israeli-Russian relations which cooled down since Bennett rose to power.

Context and Significance of the Timing

The Israeli-Russian summit reflects the following ongoing shifts in the regional landscape:

1.     Implications of US withdrawal:

The summit was held after the US pulled out of Afghanistan and amid fears that Washington might also withdraw later from Syria and Iraq.  Iranian-operated militant groups in Syria and Iraq attacked the US al-Tanf base on the border between Syria and Iraq on October 20 using five drones. The attack represents an evident Iranian escalation against the United States. With Washington not retaliating the attack, Israel has fears that Washington might very well eventually consider withdrawing from Syria, giving Iran and its militias a wider space to move freely and strengthen their influence on the Syrian-Iraqi border. It is commonly used as a passageway for smuggling arms to Lebanon’s Hezbollah and might pose threats to Israel’s security.

Russia succeeded in backing the Syrian regime against the armed opposition, which caused the United States’ influence in Syria to diminish leaving Washington with only the Caesar Syria Civilian Protection Act as the only tool for sanctions. On the other side, Moscow became the major player in the Syrian arena, evidenced by the efforts being made by regional states involved in the Syrian issue, such as Iran and Turkey, to get closer to Moscow. Israel too seeks to influence Russia’s policy on Syria to serve its own interests.

Israel is evidently annoyed by Iran’s attempts to expand in Syria close to the Israeli border. For this reason, Israel seeks to bring Iranian movements under control: either through a deal with Moscow that would allow Tel Aviv more freedom to conduct attacks against the Iranian presence in Syria, which has been the case currently.  The other route is to reduce Iran’s movements in Syria, with the aim to prevent it from establishing permanent bases on Syrian territory and from using Syria as a passageway to smuggle advanced weapons, especially precision missiles, to Hezbollah in Lebanon.

Israeli army leaked orders from Chief of Staff Aviv Kochavi to the air force to prepare well for conducting strikes inside Iran. There was also talk about planning for training on such operations. However, these statements come as part of Israel’s psychological war on Iran, and that is why Tel Aviv relies on Moscow to curb threats posed by Iran in Syria.

The pictures of the talks displayed the two leaders, Putin’s commending the talks as fruitful, and Bennett’s description of Russia as a true friend of the Jews, showing that the summit succeeded in overcoming previous differences between the two countries and that new understandings were reached. These can be outlined as follows:

Former Israeli prime minister Benjamin Netanyahu and President Putin reached some consensus in 2015 about Syria. These provide for preventing Syria from becoming a source of threat for Israel, preventing the repositioning of anti-Israel forces in areas close to the Israeli border, as well as allowing Tel Aviv to conduct attacks on any positions posing threats. This is what Moscow agreed on two conditions: coordination between Tel Aviv and Moscow prior to launching any such attacks that must only target Iranian forces and militias, as well as refraining from attacking the Syrian army forces.

After Bennett assumed office, replacing Netanyahu, Israel stopped coordinating with Moscow before launching any attacks against Iran. This prompted Moscow to strengthen the air defense capabilities of the Syrian army, which then was able to weaken the effectiveness of Israeli attacks. Additionally, Moscow activated Syria’s S-300 air defense systems, after it kept them inactive throughout Netanyahu’s tenure. Moscow also provided Damascus with advanced Pantsir and Buk air defense systems.

That is why Bennett’s visit was aimed at restoring previous understandings and benefiting from common interests in Syria, the most important of which is to minimize Iranian presence on Syrian territory. Moscow asserted this, when President Putin stated, after Bennett assumed office, that cooperation between Russia and Israel would help promote peace, security and stability across the Middle East.

The two sides reached a deal allowing Israel to continue to conduct airstrikes in Syria without targeting the Syrian military and civilian infrastructure or the Syrian government itself. The two sides also agreed on setting up a joint team to counter danger of Iranian drones and reactivated a de-escalation in South Syria by keeping Iranian presence 80 kilometers away from the Golan Heights.

Moscow seeks to use Tel Aviv as leverage against the United States, over two specific matters. Firstly, Moscow wants to pressure Israel to pressure Washington to mitigate economic sanctions against Damascus so as Moscow can get reconstruction efforts underway, especially as US sanctions block Arabs’ openness to Damascus and strengthen Iranian economic influence on Syrian, which does not serve the interests of both Russia and Israel.

The second issue is the fate of al-Tanf base used by US troops. Moscow is aware that Washington might eventually withdraw from this area, and wants to prepare for such a scenario through highlighting its power and willingness to deploy its own troops there after the potential US withdrawal, while also backing Syria’s Kurds against Turkey’s threats. Eventually, this would eventually guarantee that Moscow would act as a mediator between Damascus and the Kurds so as to ensure that their areas will be brought again under the sovereignty of the Syrian state.

Moscow is party to the Iran nuclear deal, the revival of which is strongly opposed by Israel. This is one point of contention between the two states as Israel is seeking to reach an understanding with Moscow about the need to stop Iran’s military nuclear program.

It should be noted here that Moscow, sometimes, adopts Iran’s point of view that Washington is responsible for creating the current crisis by withdrawing from the deal. It also accepts a return to the old nuclear deal; a position Israel rejects as it opposes the revival of both the old and new amended nuclear deal.

Israel has fears over the Russian-Iranian military cooperation, which recently gained momentum from a visit to Russia Iranian chief of staff Mohammed Hossein Bagheri, as well as from Russia’s approval of exporting various weapons to Iran.

Israel, perhaps, might have sought reassurances from Moscow that it will not provide advanced Russian weapons to Israel, especially satellites that can strengthen Iran’s capability to spy on Israel’s strategic and military areas.

Putin highlighted that trade and economic relations with Israel grew 50 per cent in the first seven months of 2021 despite the Covid-19 pandemic. Additionally, Moscow allowed Russian tourists to visit Israel although the Israeli ministry of health has not approved Russia’s Sputnik vaccine. The effort aims to bolster relations with Israel.

The conclusion is that Israel succeeded in restoring the best part of understanding with Russia about the Syrian issue, especially regarding the Israeli attacks on Iranian presence on Syrian territory. On the other side, Moscow sought to utilize Israel to place pressures on Washington to mitigate the sanctions it has imposed on Damascus to eventually push reconstruction efforts forward and involve Arab and other states in it so as to minimize Iran’s economic influence on Damascus and serve the interests of both Israel and Russia.