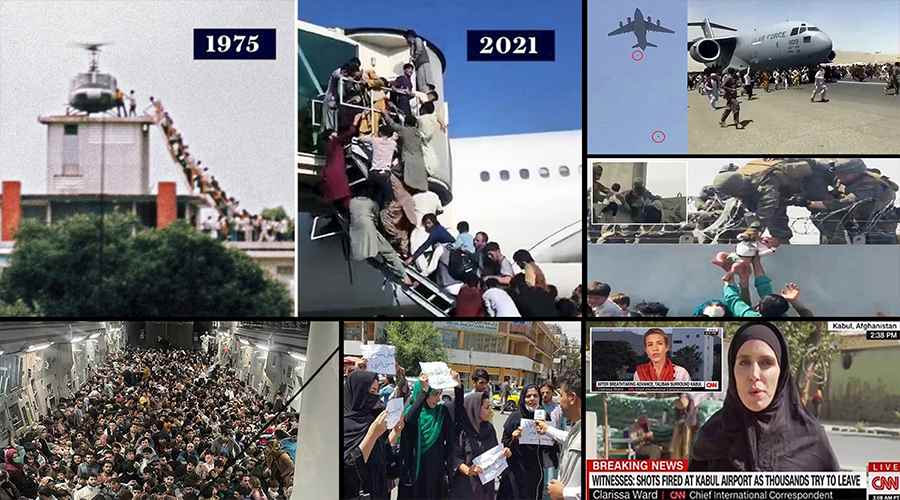 On August 15, the world was destined to witness a historic event. In a few hours that seemed like ages for the Afghans, the Taliban took Kabul over. The world felt as if the clock was turned back, calling up to memory events which took place twenty years ago.

Once the movement leaders announced the takeover of Kabul and entered the presidential palace, certain historic scenes occurred that will be associated in people's minds with these moments for years to come, and will contribute to forming the Taliban's mental image, depending on the viewer's perspective. 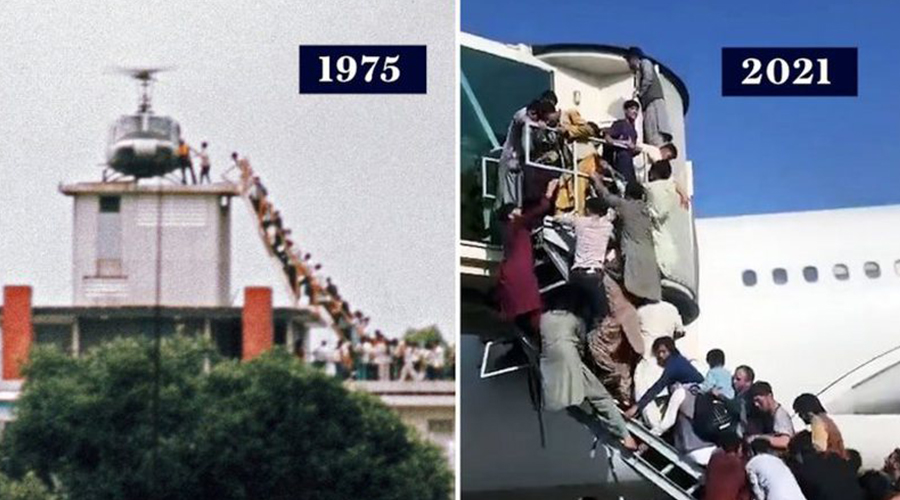 The photos of the Kabul resemble the US withdrawal from Vietnam. It seemed as if history was repeating itself; though time and place were different, yet fear and panic were the same, along with citizens' desperate attempts to escape. Most important is that American failure was the same; in both cases, chaos was the name of the game as far as evacuating people was concerned. As people got killed trying to flee Saigon and Kabul alike, US withdrawal has become irrevocably associated with failure.

One of the most important media products that immortalized those tense moments is a video made by the Daily Telegraph, comparing the 2021 Kabul escape to the 1975 escape of Saigon. In both cases, American, Vietnamese and Afghan citizens flooded US embassy and airports, putting an end to a failed American adventure. The failure was not merely military; even the final scene was a complete fiasco, as the US could not even provide a safe passage for its natives and employees, as if its failure had to culminate in such an absurdly tragic scene. The failure is even made worse by the fact that the US chose to stay in Afghanistan for twenty years, spending more than 2,000,000,000,000 dollars. British newspapers severely criticized London and Washington, particularly referring to the final scene, and stressing the importance of holding US officials and their international allies accountable.

News agencies published images of the Kabul airport during the evacuation of US forces after the Taliban takeover. Large numbers of Afghans rushed to the airport, trying to flee Afghanistan with those who were leaving, fearing for their lives. One of the most horrible images was that of hundreds of Afghans crowded aboard a US airplane, leaving behind their money and possessions, let alone their country, and heading for the unknown with no guarantees whatsoever of a better future. 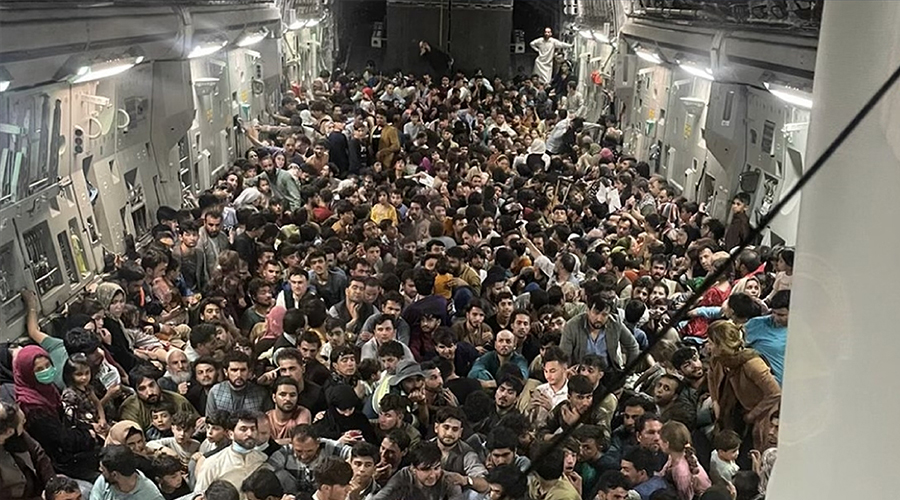 According to a report by Defense One, the airplane carried 640 people, which is absolutely unusual for such a kind of plane. The report also mentioned that the pilots hesitated to fly with such a large number of passengers, but finally decided to take off, having realized that the passengers had no other choice.

Apart from the plane, thousand others were packed in front of the airport, some of whom had visas to European countries, whereas others had nothing but the vein hope of getting a chance to flee into Europe and escape the consequences of the Taliban takeover.

Falls to Death from Planes

History will never forget the sight of Afghans rushing after the US evacuation plane in the Hamid Karazi Airport. Some of these were cooperating with the US forces or the government, and, consequently, knew that the Taliban would not let this go unpunished. Others lived in Afghanistan under the rule of the Taliban in the 1990s, so they would give anything in order not to re-live this era, not to mention those who lived in post-Taliban Afghanistan and were therefore unwilling to give up their ordinary lifestyle. 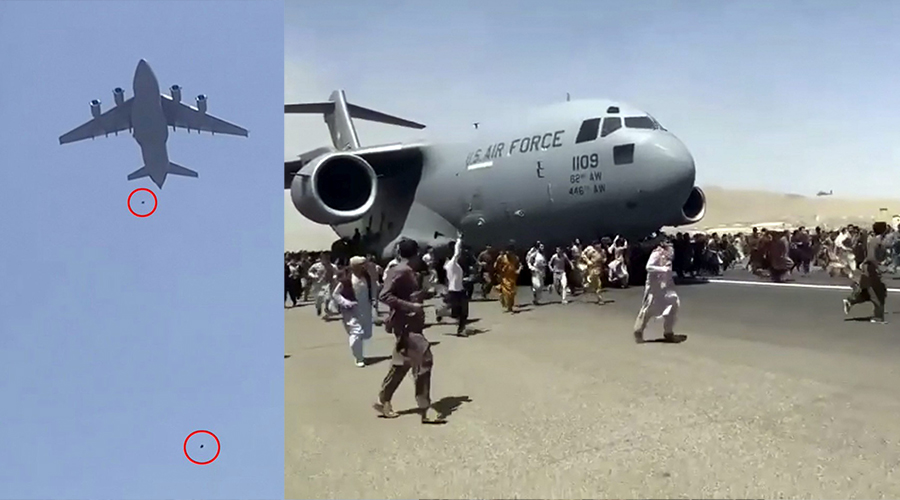 However, reaching US planes was not an easy job. Chaos was the name of the game. The Taliban takeover was a terrible shock to many people. The large numbers of Afghans who rushed to the airport aggravated the situation. This led the Americans to suspend the evacuation processes for hours, and made many countries, including Britain and the USA, decide to send special forces to complete the evacuation of their natives and Afghan employees. It seems that the Taliban was happy about the whole thing, as this situation resulted in more communication with the USA which wanted to make sure that the evacuation processes would be resumed, and, consequently, had to recognize the Taliban's control of the capital one way or another.

Sadly enough, not only did the Afghans run after the evacuation plane, but they also clung to its wing. As a result, many of them simply fell off and died, in a tragic scene that shocked the whole world. It was actually like a scene in a movie, completely hard to believe. Red circles were added to the images, to show that what fell off were humans and not parts of the plane. 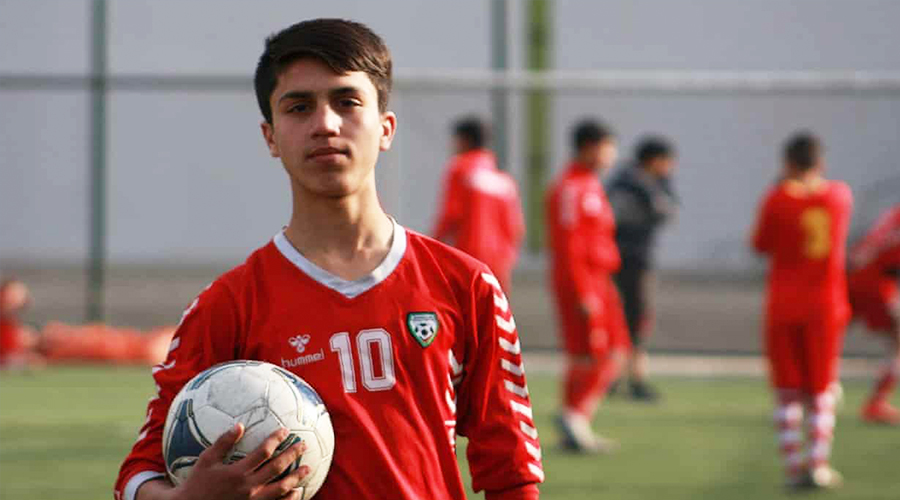 Ariana TV network in Afghanistan quoted officials who said that junior football champ Zaki Nori was one of those who clung to the plane's body only to fall to their death. Nori is but one of many Afghan youth who prefer getting themselves killed to living under the Taliban regime.

Afghans also pushed one another in order to reach the evacuation planes, which caused many deaths. According to the Daily Mail, more orphans were added to the Afghan population on account of this. Things will sound more horrible if we bear in mind that, according to Associated Press, Afghanistan already lost 47 thousand civilians in the last war.

Many Afghans regarded the walls of the Kabul airport as the demarcation line between the Taliban rule and freedom. This is why many of them decided to throw their children over the walls in the hope that they will be able to have a chance to live a better life, even if this meant being separated from them. Many images showed parents handing their children to American and British soldiers over the barbed wire on the airport's walls. On August 19, An Afghan activist living in Germany published an unforgettable photo of an American soldier catching an Afghan baby over the walls. This photo was exploited by the US, as major Jim Stenger said that the baby was reunited with his family, who are now enjoying the protection of US forces. They are no longer threatened by the Taliban fighters who, according to Stenger, were causing terror outside the airport and firing into the air to impose order and discipline. The baby in the photo was not the only one to be handed to Americans. The Independent published another photo of a woman handing her child over to a British soldier. The newspaper's correspondent in Kabul quoted a British soldier saying that Afghan mothers were beaten by the Taliban fighters and that they believed that the only way to save their children was to hand them over to British soldiers. He added that some children fell on the barbed wire and were injured, which made him, and other soldiers entrusted with facilitating the evacuation of British diplomats and Afghans cooperating with the British army, cry.

British newspapers are publishing lots of photos like these, but we must take into consideration the fact that British and American forces are partly responsible for the current situation in Afghanistan. 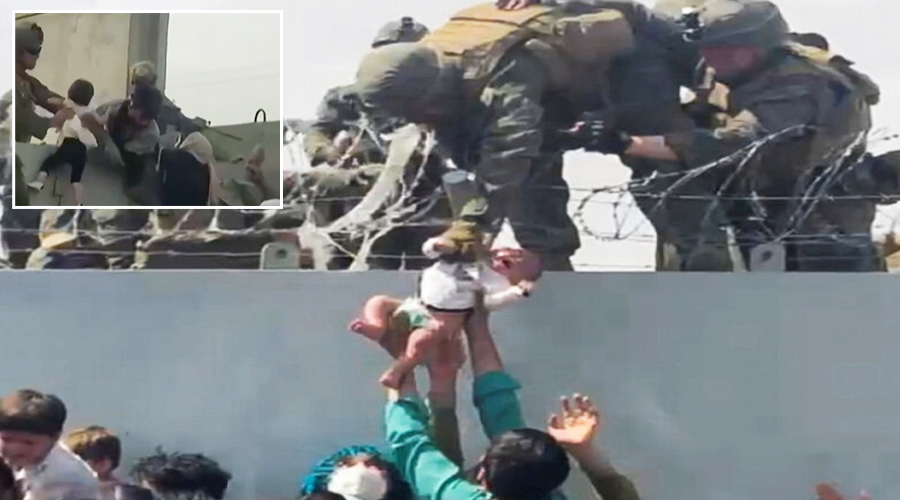 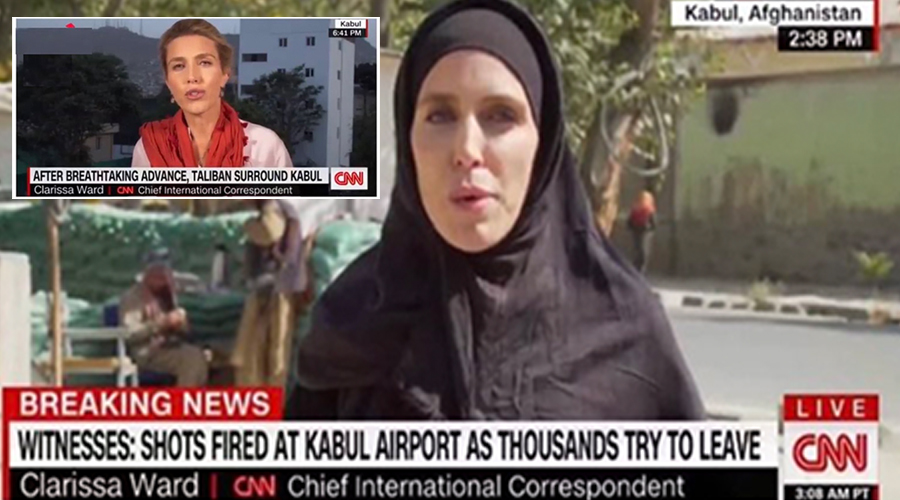 The Hijab Alone Would Not Suffice

On August 16, Clarissa Ward, CNN correspondent in Kabul, appeared on screen wearing hijab on a long, black Islamic dress. Some interpreted this as a smart attempt on the correspondent's part to circumvent the Taliban's fanaticism, as she was doing her job near some armed fighters as shown in the video. She seemed to be doing her job freely. Others, however, regarded this as evidence that the Taliban will go on oppressing women, no matter whether these women are Afghans or foreigners.

Ward thought that she had to give an explanation, especially as the photo was going viral. Accordingly, on August 16 she tweeted that she usually wears hijab while working in public places in Afghanistan, but she does not wear it when she is in her office. Then in the evening, she appeared without hijab while commenting on president Biden's speech. Ward continued to work in Afghanistan wearing hijab, imagining that she was no longer provoking the Taliban fighters. However, on August 17 she interviewed a Taliban leader about the approach the movement would follow to run the country, and he said that women must wear hijab. When she asked him whether 'her' hijab was acceptable, he said that women must cover their faces, wearing niqab. When she asked him whether it is a must, according to Islam, that women wear niqab, he said yes.

After this situation, Ward said that the way she was treated in the past few days was one of the worst things that she has faced in her life as a reporter. She also said that while reporting from the airport, her team was almost assaulted by the Taliban fighters so she had to interfere, but she was ordered to cover her face, so she left the airport, then she made a decision to leave Afghanistan altogether.

Before she had left the airport, she showed the viewers the Kabul airport from inside, saying that reaching the evacuation planes required waiting for five hours under the scorching heat of the sun, and that some had to wait for two days in the open. However, she said, this is nothing compared to what is awaiting thousands of Afghans who would not be able to escape the Taliban rule but were still desperately trying to achieve this dream amid the chaos and even the bullets of the Taliban fighters. On August 20, she published a photo of the plane that carried her out of Afghanistan.

On August 17, Shakila Ibrahim Kheil published on Twitter a video of women protesting, for the first time, against the Taliban. Though the protesters were few, that was an indication that there are women activists in Afghanistan who are willing to take the risk, challenge the Taliban and make it clear that Afghan women will not easily give up the gains they achieved in the past two decades. The video went viral on media platforms all over the world, and there were lots of analyses concerning the Taliban's 'new' approach to dealing with women, especially as some Taliban fighters appeared in the video, and it was obvious that none of them tried to attack the protesters in any way, which is unusual, given the documented cases of oppressing women. 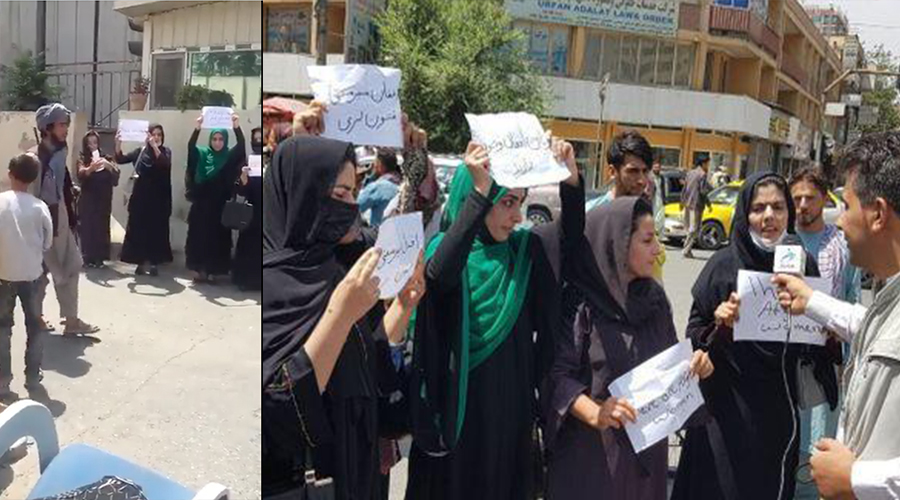 BBC reporter Yalda Hakim, who is of Afghan origins, reported that girls were forbidden to join universities in Herat. On August 16, Hakim mentioned this information in an interview with a Taliban spokesperson, who unexpectedly replied that the movement's policy does not forbid the education of women, and seemed as if he knew nothing at all about what happened in Herat.

Taliban sympathizers promoted the video of the protest as evidence that the Taliban of today is different from the Taliban of the past as far as dealing with women is concerned. However, this is hard to believe, especially if we bear in mind that the Taliban fighters knew that the demonstration was being shot, so it is not unlikely that they ignored it on purpose to project a better image of the movement.