Is the Iranian influence in Iraq Waning? 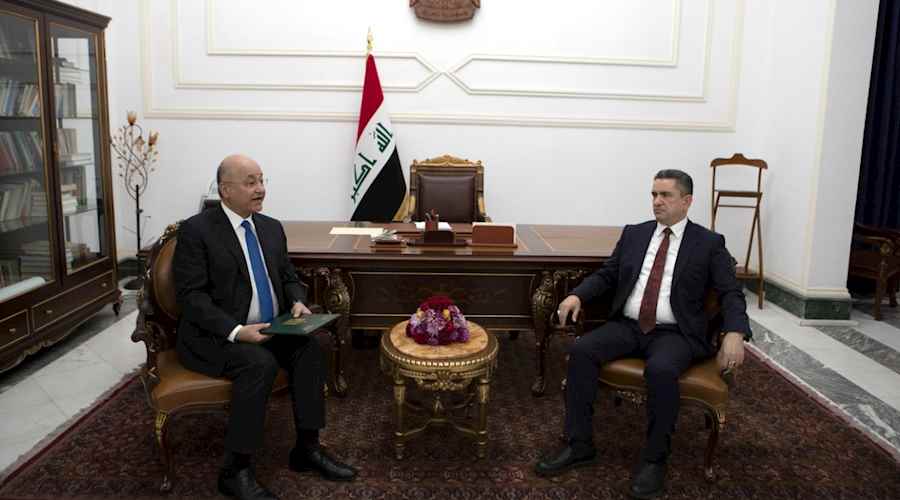 One of the early indictors that Qassim Soleimani’s death may usher the undermining of Iran’s influence in Iraq is the nomination of Adnan al-Zurfi to be the prime minister, in the wake of failed attempt of the Iranian backed Mohammed Allawi to form a cabinet. Such a turn of events could not be underestimated, as it is a clear indication that Iran’s regional influence is suffering, and that America’s policy of maximum pressure is yielding.

A Shi’ite Candidate with no Iranian support

The Iraqi president, Barham Salih, nominated on March 17, 2020, Adnan al-Zurfi to be the next prime minister of Iraq, and gave him a period of 30 days to form the new Iraqi government. This decision came after Iran failed to endorse his predecessor Mohamed Alawi, prime minister-designate. In addition, Shi’ite political parties backed by Iran expressed their refusal to nominate al-Zurfi. David Schenker, Assistant Secretary of State for Near East Affairs, on the other hand, supported his candidacy and stated “we are supportive…[of] the politicians in Iraq who support Iraqi sovereignty,” thus, indicating that Washington expects that Adnan al-Zurfi would undermine Iran’s influence over Iraqi politics and security affairs.[1]

Al-Zurfi was quick to meet some of these expectations, as he made it clear that he will dedicate efforts to bring all weapons under state control, hinting at the Popular Mobilization Forces (PMF), loyal to Iran. In addition, he expressed his willingness to establish balanced relations with other countries; statements that reflect his determination to undermine Iran’s influence over Baghdad.[2]

Furthermore, Iran’s concerns will be further accentuated by al-Zurfi’s own history. Al-Zurfi joined the ranks of the outlawed Dawa Party in 1983, and was imprisoned in 1988 for his ties to the militant group. However, he escaped, after the 1991 uprising, to Saudi Arabia, and then he migrated to the US. After the American occupation of Iraq in 2003, he was appointedby American officials as the governor of Najaf.[3] He was part of the former Prime Minister Haider al-Abadi’s Victory Coalition, an outbreak of the Islamic Dawa Party.[4]

Thus, al-Zurfi, despite being a member of the Iraqi Shi’ite political parties backed by Iran, still, Tehran rejects his nomination because of his history of cooperating with the US. This was apparent in the rejection of al-Zurfi by hardline Shi’ite political parties, who perceived him as a threat to their privileges. Hadi al-Ameri, the leader of Fatah Coalition, and Badr corps, one of the militias affiliated to the PMF, claimed that al-Zurfi’s nomination is ‘illegal and provocative’. Furthermore, Asaib Ahl al-Haq leader, Kays al-Hazali, insisted that the Iraqi president Barham Salih has endangered the peace, in a veiled threat that PMF might utilize force against the Iraqi government.[5]

The successful nomination of al-Zurfi represent an unprecedented development in the Iraqi political process, since the parliamentary elections of 2005. Various Iraqi Shi’ite political parties suffered from internal rifts, since the American occupation of Iraq in 2003 that materialized in some circumstances into open clashes between the militias affiliated to the contending parties.

However, Qassim Soleimani, the former head of Quds Force, used the external operations arm of the Islamic Revolutionary Guard Corps (IRGC), to unite those clashing factions to maintain the Iranian influence over the Iraqi political System.

During every negotiation to form the Iraqi government since 2005, Tehran intervened to mediate between different factions, and endorsed a prime minister who is acceptable by the major Shi’ite political parties.

However, after Soleimani’s death, there are clear indications that Iran’s influence over Shiite political parties and militias alike is relapsing, and Tehran is incapable so far to find a person that can take over his role of directing Iran’s influence in Iraq and beyond.[6]

One indication in this context is the utilization of Mohammed al-Kawtharani, the Hezbollah representative in Iraq and a member of Hezbollah's political council, to forge unity among Shiite factions after Soleimani’s death. Kawtharani played a role with Soleimani in the December 2019 negotiations for choosing a new prime minister after the resignation of Adel Abul Mahdi in November 2019. After Soleimani’s death, Kawtharani tried, without much success, to persuade Sadr to support Tawfiq Allawi, who was designated as Iraq’s new prime minister in February 2020.[7]

After Kawtharani’s failure, the Secretary of Iran's Supreme National Security Council (SNSC), Ali Shamkhani, visited Iraq in March 2020 to find a new agreed upon candidate among Iraqi Shi’ite factions, to be endorse, after Mohammed Allawi withdrew his candidacy, due to his failure to form a new cabinet.[8] Not only Kawtharani and Shamkhani failed miserably in their mission, but they were surprised by the Iraqi president nomination of Adnan al-Zurfi as prime minister-designate, and the endorsement of such candidacy by the political factions associated to Muqtada al Sadr and the former Prime Minister Haider al-Abadi.[9]

A cross-sectarian alliance to form the Iraqi government was a red line for the Iranian ruling elite that seems to be crossed this time. Since, the first election Iraq witnessed after the occupation of Iraq in January 2005, Tehran’s main aim is to make the nomination of the Iraqi prime minister achieved through consensus among the Iraqi Shi’ite parties, and then to be later endorsed by the Arab Sunni and Kurdish factions. Adnan al-Zurfi came as an exception to this rule, which reveals that the Iranian influence is facing serious challenge.

Acknowledging the gravity of the situation to its national interest, the new commander of Quds Forces, Brigadier General Ismail Qaani, visited Iraq on early April 2020, to persuade Shi’ite politicians to endorse another candidate without much success. After his visit, some of the Shi’ite militias issued a statement threatening the American forces in Iraq, in addition to asking lawmakers to withhold the vote of confidence for al-Zurfi.[10] Thus, Iran was intending to utilize the force to mitigate for its loss of influence over the Shi’ite ruling class in Baghdad.

Another tactic utilized by Qaani is trying to push the Fatah Coalition to endorse Iraq’s Intelligence Service chief Mustafa al-Kazemi, who was accused by Iran’s militias of collusion with the US in the assassination of Soleimani and al-Mohandis.[11] Thus, endorsing Kazemiby Iran, as an alternative to al-Zurfi reveals that Tehran has fewer options in Iraq, as both men are accused by Iran to be loyal to Washington.

It should be taken in consideration that these developments came at a time, when Iran’s popularity inside Iraq is decreasing significantly, as apparent in the demonstration that Iraq witnessed, since late 2019, in major Shi’ite cities against the Iranian influence over Baghdad. Angry protestors burned down the Iranian Consulate in Najaf and Karbala, chanting "Iran out of Iraq."[12]

Analyzing the Iranian policy in Iraq, one could get the impression that Tehran was planning to consolidate its influence, not only through its leverage over the Iraqi Shiite political class, but also through supporting the formation of militias that are loyal to Tehran.

One of the early strategies adopted by Qassim Soleimani, to this end, is the replication of IRGC through the establishment of the Popular Mobilization Forces (PMF), under the pretext of fighting ISIS. Soleimani assisted in the legitimization of the PMF as paramilitary forces outside the hierarchy of the Iraqi Armed forces. Tehran retains the loyalty of these forces through assigning their leaders, and through directing considerable amount of financial support to these militias to retain their loyalty.[13]

However, Tehran faced a rising challenge in the aftermath of the assassination of Abu Mahdi al-Muhandis, the deputy chief of the Popular Mobilisation Committee. Like Soleimani, al-Muhandis was capable of unifying various factions under the umbrella of PMF. Tehran’s designation of Abu Fadak al-Mohammedawi, a senior official in Kata’ib Hezbollah, as the replacement for al-Muhandis was met with resistance from some factions within PMF.[14]

Yet still, Iran retains control over other factions under the umbrella of PMF, especially Iraqi Kata'ib Hezbollah, which Tehran utilized to threaten the presence of the American troops in Iraq, and gain leverage over the Iraqi government.[16]

However, fearing reprisal from American forces in Iraq, and the diminishing financial support from IRGC, due to the current Iranian economic crisis, will further put a constrains on these militias’ willingness to utilize force, whether against the American forces or the Iraqi government.

The Pentagon, on the other hand, has ordered his military commanders in March to plan for a massive retaliatory attack against Kataib Hezbollah, that has threatened more attacks against American troops,[17] in addition to deploying patriot missile defense systems to protect its bases in Iraq to send a clear message to Tehran that the US is not willing to withdraw from Iraq, as Tehran might desire.

Iran’s influence in Iraq is built upon three main pillars namely; its utilization of soft power as a Shi’ite power, its influence over Iraq’s Shi’ite factions, and finally the Popular Mobilization Forces. However, those pillars are facing unprecedented challenges. First; its popularity among Iraqi Shi’ite population is dwindling, despite its investments in exacerbating Sectarian rhetoric. Secondly, it faced rejection from some Shi’ite political parties to follow orders from Tehran. Thirdly, some factions actually withdrew from the PMF.

Thus, in order to regain its influence over the nomination of Iraq’s prime minister, Tehran has to dissuade Sadr and Abadi from supporting al-Zurfi, or to use its militias to intimidate them, a tactic that might prove costly at this time, and might even backfire.

[6] Martin Chulov and Dan Sabbagh, After Suleimani: Iran's scramble to recover from general's death, The Guardian, February 18, 2020, accessible at: https://bit.ly/3dHgFmU

[16]) Khairallah Khairallah, Iran fighting for the survival of its regime and that of regional proxies, The Arab Weekly, March 22, 2020, accessible at: https://bit.ly/2wF9ZVR