Reasons Behind Appointing Ebrahim Raisi as Chief of the Judiciary 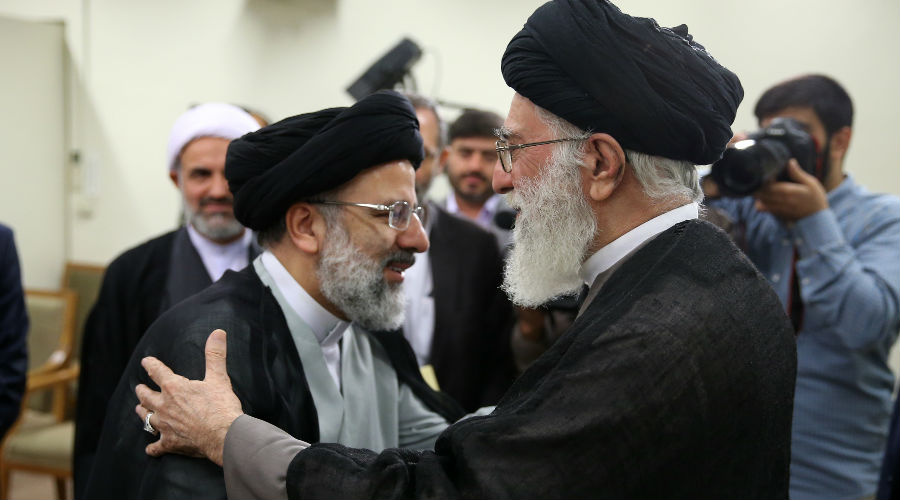 The decision of the supreme leader of the Islamic Republic of Iran, Ali Khamenei, to appoint Ebrahim Raisi, the head of the Imam Reza Shrine in Mashhad, as the judiciary chief, earlier this month, is not only linked to the former’s continued efforts to readjust the balance of power in the Iranian regime. It is also related to the impact of the pressures facing Tehran on Khamenei’s vision of the regime itself, especially since these pressures have not only affected the domestic situation but also spread abroad. International and regional powers have become increasingly concerned over Iran’s role in the region, its missile and nuclear programs, and its human rights violations.

Strikingly, the letter of appointment, or the “verdict” issued by Khamenei, focused on his call for Raisi to “root out corruption in the judiciary” and on what he termed the “judicial transition document”, which he said was prepared by Raisi. This provides two important indications: first, it detracts from the former judiciary chief, Sadiq Larijani, who was appointed chairman of the Expediency Council after the death of its former Chairman Mahmoud Hashemi Shahroudi on 24 December 2018.

In other words, this call suggests that Larijani failed to address corruption in the judiciary, which has affected him personally and his family, following the controversy that has raged in Iran in recent years over his family’s involvement in corruption cases. This controversy has been continually sparked by former President Mahmoud Ahmadinejad, who is known for his animosity towards both Sadiq and Ali Larijani, chairman of the Islamic Consultative Assembly.

Therefore, Khamenei’s insistence on the continuous rotation of positions, with the same persons, seems to be one of the main reasons for the continuation of the protests, because it reflects the regime’s failure to fulfill its own promises on combating corruption. This is evident in Khamenei’s keenness on the appointment of Sadiq Larijani as chairman of the Expediency Council, one of the main institutions in the regime, which determines the higher policies of the regime, in cooperation with the supreme leader, and settles disputes between the Islamic Consultative Assembly and the Guardian Council.

Secondly, Khamenei has long been preparing for a change in the balance of power within the regime, both between the political wings of the fundamentalist conservatives, or between radical institutions and religious bodies whom he has a direct control over their administration and wealth. It is known that Raisi leads one of the most radical political wings- despite his recent loss to President Hassan Rouhani in the last presidential election held in May 2017- as opposed to other wings led by fundamentalist cadres such as Mohammad Baqer Qalibaf, former mayor of Tehran, Gholam Ali Haddad-Adel, former chairman of the Islamic Consultative Assembly, along with Ahmadinejad.

Although the supreme leader focused on the fact that one of the reasons that led him to choose Raisi for this position is related to his previous roles in the judiciary, when he held the position of prosecutor-general of Tehran (1989-1994) and the prosecutor-general of Iran (2014-2016), other considerations had factored into this decision, as follows:

1- Protests: Khamenei seems to be trying to send a message to the domestic front that there will be no change in his policy in response to the pressures exerted by protesters, who have consistently called for replacing and holding accountable those who have been accused of adopting a more stringent policy in dealing with their demands. This is evident in the appointment of Larijani as the Chairman of the Expediency Council and Ebrahim Raisi as judiciary chief. The two are among the prominent officials who have been the subject of ongoing campaigning by protesters, political activists, advocates of human rights and freedoms issues in Iran.

2- Maintaining the hard-line policies: The role of Ebrahim Raisi in the so-called “Death Committee” or “Death Squad”, which has been controversial since 2016, has gained international attention, especially after he ran for the 2017 presidential election. Although this issue dates back to 1988, when some of the figures, including Raisi, were accused of approving the execution of thousands of opposition members, it came to the fore again in mid-2016, after the publication of an audio recording of a discussion between four persons, including Raisi and deputy of the Supreme Leader, Ali Montazeri, who was critical of these actions.

This attention was evident in the UN human rights report of 2 September 2017, which, in conjunction with its twenty-ninth anniversary, stated that “if the number of people who disappeared or were executed could be questioned, there is compelling evidence that thousands were summarily executed”.

Thus, Khamenei’s latest decision shows his intent to send a message that the pressure of international powers will not force him to soften his policy in handling contentious issues.

In other words, Khamenei’s insistence on promoting Raisi at this time reveals his desire to reassert his stance not only with regard to Iran’s international human rights condemnations, but also in relation to other issues, particularly the calls for Tehran to engage in new negotiations to reach a more comprehensive agreement that accommodates its nuclear program, ballistic missiles, and regional role, which Iran has so far categorically rejects. This is stance is evident in the remarks made by Foreign Minister Mohammad Javad Zarif, who addressed the US officials, on March 1, saying: “You'll never get a better deal”. Zarif was commenting on the failure of the meeting, which brought together US president Donald Trump and North Korean leader Kim Jong Un in Hanoi one day earlier, to achieve positive results.

3- Maneuvering: Apparently, that Khamenei is trying to keep all the options available to him in the “postponed” issue, which has received special attention inside and outside Iran: his succession. Although many analysts have indicated that Raisi is one of the candidates to succeed Khamenei, as a Supreme Leader, Raisi does not confirm or deny it, or make any reference that reinforces any of the two possibilities, so that all options remain open in this issue. Accordingly, there may be a tendency to not confine Khamenei’s successor to one person, but a collective leadership of three.

Therefore, it can be argued that the veil of opacity the regime maintains over this issue opens the door to all possibilities, which means that the chances of electing or excluding Raisi for this post remain equal.

Having said that, the controversy that preceded and accompanied Raisi’s appointment in his new position suggests that the coming period may see further steps to readjust the balance of political forces ahead of the difficult challenges which are expected to face Iran in the near term.