Will Russian Succeed in Reaching a Settlement in Afghanistan? 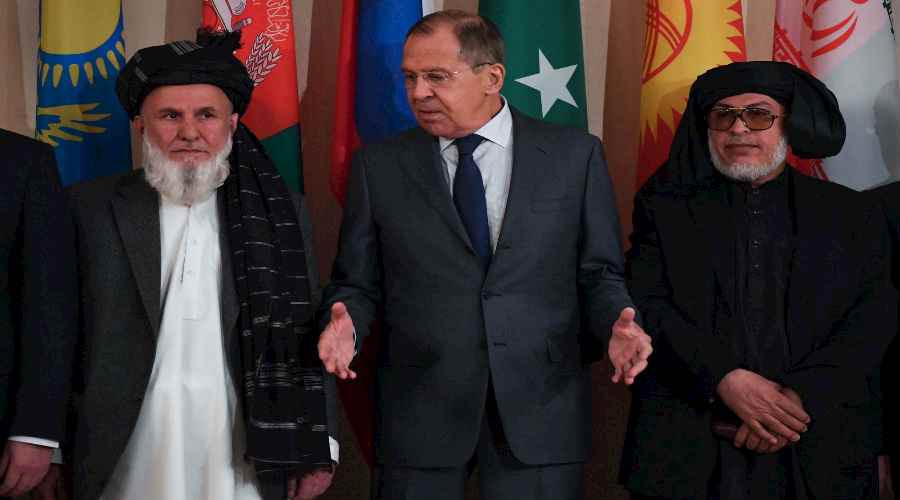 Moscow hosted a new round of talks in an effort to reach a settlement for the conflict in Afghanistan, on November 9, dubbed as “Moscow Format Consultations on Afghanistan”. Moscow considered that the potential gain would be the participation of Taliban representatives for the first time in two years, since the launcg of the talks. These talks witnessed two previous rounds, which did not yield any results. They were mainly a regional dialogue with the neighbouring countries concerned with the Afghan issue.

Although Russia says there has been a considerable progress in the talks, this does not negate the fact that they still face many challenges that were evident in the outcome of the meeting. However, Moscow will likely continue its efforts to hold further talks, especially in the light of the evolving situation on the ground, namely ISIS moving from Syria and Iraq and some Middle Eastern countries to Afghanistan. Such move is considered an eminent threat to Moscow’s national security and interests.

The “Moscow Format” has been confined over the past two years to Afghanistan’s neighbouring countries which participated in two consecutive rounds in February and April 2017. The participating countries were Russia, Iran, India, Pakistan, China, Kazakhstan, Kyrgyzstan, Tajikistan, Turkmenistan and Uzbekistan. The participants agreed that there was an urging need to reach an internal settlement in Afghanistan.

Although there is a key objective for the talks, that is “to endorse a roadmap for a settlement in Afghanistan”, the previous two rounds did not add anything new. The outcome was far from any breakthrough in substance due to the absence of the parties concerned with the dialogue, and the conditions set out by each party, which was considered impossible -at that time- by the Russian Foreign ministry.

Moscow views the participation of Taliban, five representatives from its Political Office, as a progress that enhances the chances of achieving the main objective. This has led Moscow to say it feels obliged to continue its endeavours to invite the Afghan government- with which it is conducting direct dialogue through its official envoy- to participate in the talks, as Taliban does. However, Moscow has not succeeded in convincing the Afghan government to change its position, which has only dispatched a delegation from the Afghan High Peace Council.

Yet, the Afghan government has not closed the door to other possibilities in the future. A statement by the Afghan Ministry of Foreign Affairs, ahead of the launch of the recent round, said it “hopes that the talks hosted by Russia lays the foundation for direct peace talks with the militants in the future”.

Through these efforts, Russia aims to achieve two main objectives:

1- To curtail the growing influence of ISIS in Afghanistan: Moscow seems to expect a future confrontation with ISIS, which is stepping up its activities near the Russian borders. Accordingly, it is looking for local allies to rely on in such confrontation, which is evident in the remarks of Russian Foreign Minister, Sergey Lavrov. “There are common goals for all participants in the meeting to confront the growing presence of ISIS in Afghanistan”, Lavrov said. “The increase in the number of ISIS militants in northern Afghanistan threatens the security of Central Asia, reaching 2,000 persons, including 70 per cent Pakistanis, 6 per cent Uzbek, 4 per cent Chechen, 3 per cent Arab, 1 per cent Chinese and 14 per cent Afghans”, according to the Secretary of the Russian Security Council, Nikolai Patrushev.

2- To limit the repercussions of the US moves in Afghanistan: Russia views such moves as threats to its interests. It believes that after 17 years of war in Afghanistan, the US failed to reach settlement there despite the high costs it incurred, which amount to a trillion dollars according to some estimates. Moscow thinks that the US is not intent on reaching a settlement. Thus, Moscow doubts the US intentions in maintaining the situation under control.

Cautious Attitudes
What is striking is that Russia appeared cautious in assessing the outcome of the recent talks. This may be attributed to the fact that there are two challenges that may confront Russian efforts. The first is the insistence of the warring parties on setting preconditions for participation in direct negotiations under the auspices of Moscow. The Afghan government requires that Taliban recognizes the constitution and hence the legitimacy of the government, but Taliban rejects that and considers, according to its leaders, that “the government is illegitimate” and “backed by the US troops”.
The second challenge is that Taliban rejects a cease-fire, before negotiating a timetable for the withdrawal of the US troop, a position that Russia will not likely succeed in changing soon. Although several estimates viewed Taliban’s announcement, on October 13, on holding discussions with US Special Representative for Afghanistan Reconciliation Zalmay Khalilzad, as an indicator for the movement’s willingness to broaden the range of its options, this does not mean that Washington may seek to disrupt Russian moves, especially after it announced Khalilzad may visit Moscow in the coming period.
In conclusion, it can be argued that reaching a settlement to the Afghan crisis seems difficult amidst the current circumstances. There are no indicators that could enhance the likelihood of reaching a national consensus on the frameworks and determinants of such a settlement, amid the worsening conflict between the key local parties and the divergent positions of the international and regional powers concerned with the ongoing developments in Afghanistan.