The Political Arrangements in Syria from the Russian Perspective 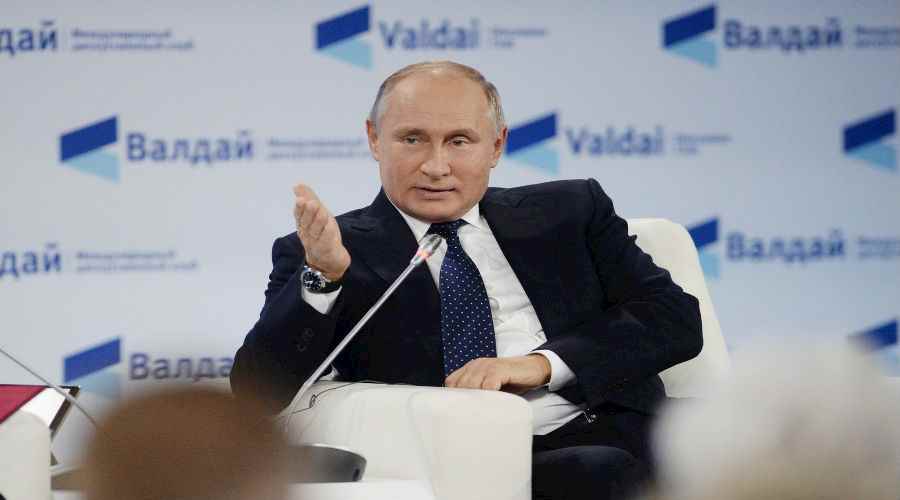 Russia seems to be gearing for fresh efforts to reach new political arrangements in Syria, after the balance of power has shifted in favor of the Syrian regime. During a speech at the Valdai International Discussion Club at Sochi resort on October 18, 2018, Russian President Vladimir Putin announced that his country achieved its goals in Syria. He noted that the Russian military intervention was aimed at fighting terrorism and preventing the fragmentation of Syrian territory, invoking the case of Somalia as a model that Russia prevented its recurrence in Syria, adding that the next stage will be devoted to settlement in the United Nations. However, this does not negate the fact that such efforts may encounter many challenges, over the key outstanding issues, foremost among is the position of the Syrian regime itself.

During his speech, Putin focused on the war on terror in Syria, noting that Russia succeeded in freeing about 95% of Syrian territory, and hence considered that the Russian goal is to fight terrorism only, which does not match some of the realities on the ground.

As for the geographical clearance, the total areas under control and influence in the liberated Syrian territory allow the Syrian regime control over about 59.8% of Syria according to July 2018 estimates, while the Syrian Democratic Forces (SDF) control 27.5%. The remaining area is distributed between Syrian opposition groups, which control about 9% and terrorist organizations, especially ISIS, controlling less than 3%. Thus, the regime establishes control over nearly two thirds of the area, part of which is based on non-military mechanisms, such as the de-escalation agreements brokered by regional powers. Therefore, the Russian intervention - despite its obvious impact - was not the only variable that ultimately produced these results.

The Russian intervention has not been aimed exclusively at confronting terrorism, the Russian agenda has many objectives that go beyond combating terrorism to re-positioning in the eastern Mediterranean, amid the mounting disagreements with Western countries over many regional and international issues.

Remarkably, other parties have been involved in achieving some of these goals, such as the US, which has supported local forces, like the Kurds and Arabs in the eastern Euphrates, in the confrontations with ISIS. The international coalition and its local allies are credited with ousting ISIS from its main stronghold in Raqqa, not Russia, Iran or Turkey.

In early May 2018, US State Department spokeswoman Heather Nauert announced that the US and the International Coalition and with them SDF had launched operations to liberate the final ISIS strongholds in Syria. “We and our partners will prevail. We will defend United States, Coalition, and partner forces if attacked”, Nauert said. It is a confirmation of the direct engagement formula based on the US military bases, including al-Tanf military base, on the one hand, and local and regional partners on the other, according to the strategy of “back seat” leadership.

Moreover, the bet on the Assad regime’s survival was not confined to Moscow alone, the gradual retreat from toppling the regime happened mainly due to a change in the policies of some international powers on this issue. Western reports indicated that the US and its European allies backtracked on their demand to overthrow the Syrian regime as a pre-condition for reconciliation in Syria. French president Emmanuel Marcon said on June 21, 2017, that he “does not see a legitimate alternative to the Assad regime in Syria”, stating clearly that “Assad’s departure is no longer a pre-condition to resolving the conflict in Syria”.

This is the model invoked by President Putin in his speech at the Valdai forum. However, steps taken by Moscow during earlier periods suggested that it did not rule out eventual application of such scenario. The statements of some of Russian officials referred to that, such as Sergei Ryabkov, Deputy foreign minister, who said at the end of February 2016, that “Russia hopes the participants in the Syrian negotiations to come up with a formula for the creation of a federal republic, which is demanded by the Kurds”. Such remarks sparked a wide debate, at that period, over Moscow’s vision of the future of political arrangements in Syria after the military conflict come to an end.

Conversely, other parties rejected this scenario for its possible disastrous consequences on the region. Besides, the complexity of regional interests dictated a different path, that is to maintain the territorial integrity of Syria, especially amid the continued activity of terrorist organizations in Syria despite the strong blows they suffer.

The above-mentioned does not negate the fact that Russia has turned itself into a major party with the capacity to participate in determining the possible trajectories of the Syrian conflict. Russia has played a significant role in reducing the activity of terrorist organizations during the past period, thanks to the actions it has insisted on taking to resolve problems in some of the areas in which these organizations are located.

Nevertheless, the Russian efforts to maintain this role face numerous challenges, notably its stance on the issue of the reconstruction of Syria, which the western countries have been keen to tie to the opening of the debate over the future of the Syrian regime and the paths of political settlement.

The ability of Moscow to reach security and political understandings with some of the parties involved in the Syrian conflict, such as Turkey and Iran, may gradually diminish due to numerous developments, including the continued escalation between Tehran and Washington over the nuclear deal and the new sanctions, and the lingering differences between Tehran and Ankara on some major issues. Moreover, the recent disagreement with Israel may bring new variables to the Russian plans for the political and security arrangements in Syria, which seems to be facing important strategic decisions in the coming period.