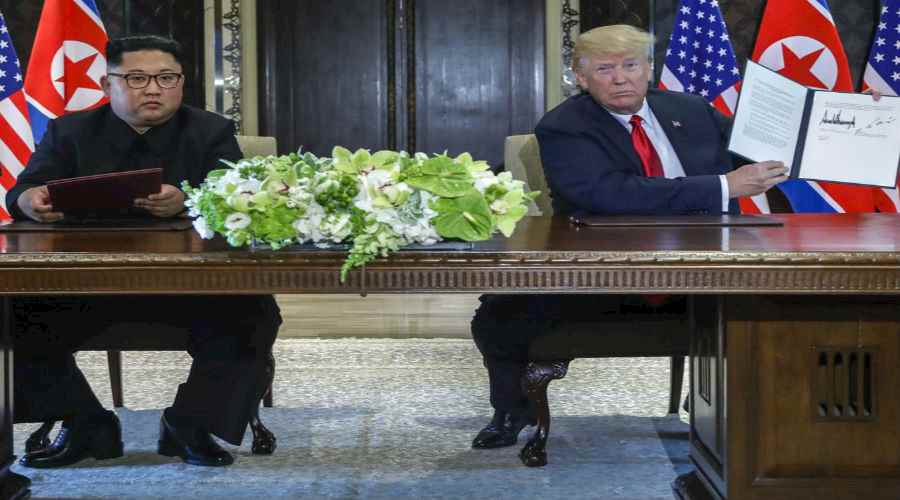 Iran is closely monitoring the possible paths of the ongoing negotiations between the United States and North Korea over the numerous outstanding issues between the two sides, foremost among them the Pyongyang nuclear and missile programs, culminated in the meeting between the US president Donald Trump and North Korean leader Kim Jong Un in Singapore on June 12.

Although this is not directly related to the current escalation between Washington and Tehran, in the aftermath of the former’s withdrawal of the nuclear agreement and the imposition of new US sanctions on the latter, the outcome of those negotiations will likely affect the possible paths of the standoff between the two parties, especially that their differences have widened beyond the nuclear agreement and extended to Iran’s regional role.

Iran warned North Korea of the consequences of “confidence” in the outcome of its negotiations with the US. On the same day of the Singapore Summit, the Iranian government spokesman, Mohammad Baqer Nobakht, said that the US president Donald Trump could nullify the deal within hours, adding: “I do not know with whom the North Korean leader is negotiating... We are facing a person who backtracks from his signature as he travels on a plane”.

There are several considerations that help explain why Iran warned North Korea against negotiating with the US, most notably are the following:

1- Supporting Washington's policy: The remarkable progress in the ongoing talks between the US and North Korea may lead the former to stick to its policy on Iran and not to make concessions, even if limited, to accommodate European countries’ pressure which seek US exemptions for European companies investing in Iran.

In other words, many estimates in Iran see that the success of the current US policy in enhancing the prospects of reaching a settlement with North Korea-despite the obstacles that still exist and may eventually hinder it, even after the Singapore summit- will make the President Donald administration think that its current policy is best suited to deal with international crises of special interest to Washington, particularly the North Korean and Iranian crises. According to the current US administration, the flexible policies of former US President Barack Obama have not only led to worsening the two crises, but they have also sent “wrong messages” to the two countries to continue their hard-line policies towards the US.

In anticipation of the expected US refusal to grant them any exemptions to continue their work in Iran, many European companies have announced a withdrawal from the Iranian market, despite the losses they may incur, giving priority to their interests and investments in the US market.

2- Piling the pressure on Tehran: Success of the current efforts in solving the North Korean crisis could lead to stepping up the US pressure on Iran, especially that Washington will be able- in this case - to focus its attention on achieving “a breakthrough” in the Iranian crisis, by working to push Iran to show flexibility in dealing with the US reservations over the current nuclear agreement and its subversive roles in the crisis-ridden countries like Syria and Yemen.

Arguably, settling the North Korean crisis means reducing the number of “hot spots” in which the US is engaged in the international arena, which will increase the impact of the steps it will take successively towards Iran over the next period, especially since it will not be engaged, at that time, in more than one crisis and with more than one regional and international party.

To put it another way, Iran does not want to be left alone in the face of the current escalation by the US which no longer excludes any option in dealing with lingering crises. Many estimates thought that the outbreak of more than one international crisis at a time would leave the US administration with limited options and will hence reduce its ability to resolve them or achieve a breakthrough. However, this has not yet occurred. The US policy has played a role, among other factors, in defusing the crisis with North Korea, which is showing a marked openness to settling disputes with Washington and neighboring countries, especially South Korea.

3- Halting Tehran-Pyongyang cooperation, especially at the military level: Relations with the latter have gained special attention from the Supreme Leader of the Islamic Republic, Ali Khamenei, who paid a landmark visit to Pyongyang during his presidency of the Republic in 1989, before being inaugurated as Supreme Leader after the death of Khomeini in June of the same year. Pyongyang has showed interest in cementing its relations with Tehran and this has been evident in the recent period, when North Korean’s president Kim Jong Un visited Tehran on 31 July 2017. The visit lasted 10 days, during which Kim participated in the swearing-in ceremony of President Hassan Rouhani on 5 August of the same year, signaling that cooperation between the two countries in various fields, particularly the military, was the focus of lengthy discussions held by officials of the two countries during that visit.

One of the most important areas of cooperation is the Iranian missile program development. North Korean technology has been an essential component of this program, which prompted the US president Donald Trump to criticize Tehran on September 24, 2017, following a test to launch Khorramshahr ballistic missile, noting that it cooperates with North Korea in this field.

4- Settling the score particularly with the hardliners, which was trying to imitate the North Korean model in exerting stronger pressure on the president’ Rouhani government and the moderates, because of their support for the nuclear agreement and talks with the US. They called for “emulating” North Korea’s hard-line policy in dealing with the US pressure.

Thus, the moderates believe that Pyongyang’s entry into a dialogue with Washington and its more flexible policy gives them the opportunity to respond to hardliners’ criticisms and exert counter pressure on them, considering that the former has ultimately followed the same policy, despite all tensions and escalation that marred the relations between the two parties over the past decades. To conclude, it can be argued that the next moves to be taken by both Washington and Pyongyang- following the success of the Singapore Summit- will be closely monitored and studied by Iran, which considers itself has a stake in the outcome of that summit, amid the continued escalation with the US over its nuclear agreement and regional role.