Threats from the Peripheries

What is happening in the Middle East? 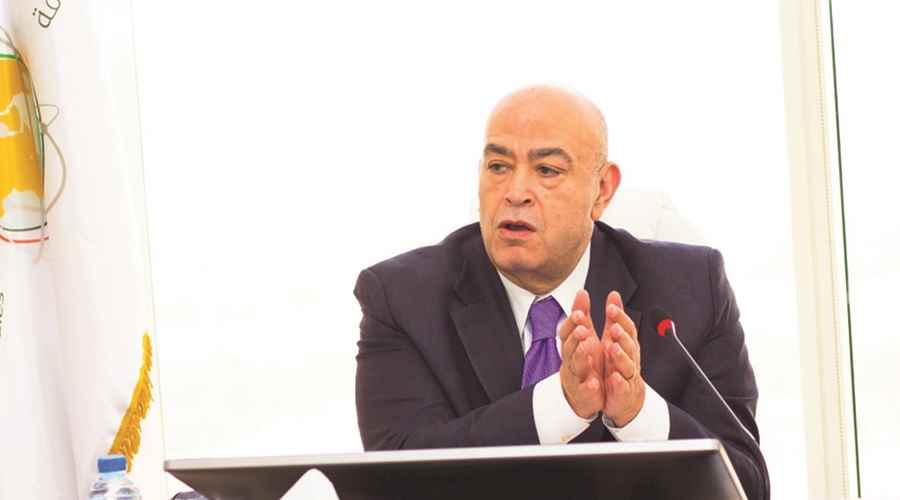 Future for Advanced Research and Studies (FARAS) hosted the Egyptian journalist Mr. Imad Eddin Adib, on February 14, 2018, as part of a discussion panel titled “What is happening in the Middle East?”. The discussion was moderated by Dr. Mohamed Abdelsalam, the academic director of the center, and attended by FARAS experts and researchers. The core theme of the discussion was the fierce conflict in the Middle East region between the 'Arab project' led by Saudi Arabia, the United Arab Emirates and Egypt and those of regional peripheries (Iran, Turkey, Israel), as well as the growing international interventions. This comes against the backdrop of the structural changes taking place in the geopolitical landscape of the region, and the attempts to redraw the map of the Middle East.

According to the participants, a proper analysis of the transformations in the Middle East region should start with adopting multidimensional interpretations of different phenomena and excluding a linear relationship between cause and effect, due to the extreme complexity, the overlapping of rapid regional changes and the intense interactions in the Middle East. Since the “Arab revolutions”, the Arab region has been under increased attacks from the Middle East periphery states (Turkey, Iran, Israel) and the international powers. Reform projects proposed by Western powers were clearly selective, deliberately excluding Turkey, Iran and Israel, and focusing only on the Arab countries despite the multiple manifestations of internal imbalance in the periphery states, which deserve a great deal of attention on the part of the international actors.

The Turkish government pursues repressive policies at the domestic level. The Turkish president Recep Tayyip Erdogan has led a crackdown on opponents, state personnel, police and military officers, restructuring the administrative apparatus of the state, dominating the judiciary and establishing full control over the levers of the state. At the regional level, Turkey adopts aggressive policies which depend on the militarization of relations with neighbouring countries and maritime piracy.

The same is true of Israel, which does not observe the minimum standards of human rights and pursues discriminatory policies against the Arabs at home and Palestinians, in addition to the rampant corruption involving political leaders, foremost among them the Israeli prime Minister Benjamin Netanyahu. As for Iran, it has traditionally violated the rights and freedoms of its citizens, practiced discrimination against minorities and repression on opponents under the Velayat-e Faqih state.

Clearly, the Western projects to change the face of the region are designed to disrupt the Arab world and generate “seismic waves”, with the aim of redrawing the map of the region and the borders within its states. To this end, they are endeavouring to fragment the Arab states and establish multiple statelets throughout the Arab world, with minorities being employed to stir up instability, despite there are significant contradictions between the governance systems in Iran, Turkey, Israel and the minorities.

Fragmentation and division practices are not new of Western states’ policies in the Arab region, as they relate to the negative historical roles of these powers and theses of Western intellectuals and politicians about dismantling the Arab project and redrawing the Middle East map. Recently, the interests of Western powers with those of the regional periphery states have converged, to foment political unrest and instability in the Arab region.

The convergence between the interests of regional and international non-Arab actors, with the aim of tearing down the middle East, has led to a surge in the political upheavals and security threats. The periphery states have sought to exploit the instability in the region through numerous policies, as follows:

1- Stoking internal conflicts: Review of the developments that followed the Arab revolutions in some Arab countries demonstrates the role of regional powers in inflaming internal tensions and conflicts, waging proxy wars with regional and international powers. This is evident in the Iranian role in Syria and Iraq, as well as the Turkish policies towards Syria and Libya, where they provide armed militias and extreme groups with money and weapons, and military training, to weaken and undermine the Arab countries.

2- Aligning with political Islam movements: Regional powers have allied with the religious movements in the Arab countries to further their interests, complete the internal penetration of the Arab world, and wage proxy wars against pro-stability powers. In this regard, Turkey has supported extremist religious movements in numerous countries in the region, providing them with shelter, financial support and media platforms to help them promote their ideas.

3- Deepening sectarian divisions: The periphery states exploit societal divisions to provoke internal instability and deepen political polarization. For example, Iran is exploiting its links with Shia minorities in Arab states to infiltrate societies and institutions and establish relations based on political subordination to advance its interests.

The motives of periphery states

The aggressive interventionist policies by the non-Arab regional powers towards the region serve several geopolitical interests, the most important of which are:

1- Undermining the 'Arab project': The periphery states view the Arab project as an obstacle to their hegemonic projects which they seek to impose on the region. This is similar to the Middle East project, which aims to integrate Israel into the region and dictate an unjust and unbalanced solution to settle the Arab conflict. Meanwhile, Iran and Turkey want to take the lead in the region and impose their hegemonic projects on the Middle East.

2- Controlling the corridors: Turkey, Iran, and Israel are in a bid to control the strategic navigational corridors in the Arab region as they control the movement of goods, people and energy resources. This is evident in the Turkish quest to bolster its political and military relations with Sudan and establish a foothold in Suakin island, as part of its policies to penetrate the Red Sea. Besides, Ankara is deliberately militarizing regional interactions in the Mediterranean and threatening neighboring countries in order to control the gas fields near the Cypriot coast. This happens against the backdrop of the rivalry on the “regional energy hub”, which links the Mediterranean with Europe. However, it seems that Egypt has recently managed to resolve the issue in its favour.

3- Securing economic interests: The Arab region is an important market for Middle Eastern periphery states because they lack geographical extensions that could serve as permanent markets for their products. Israel, Turkey and Iran are focused on the economic outcomes of their regional policies; hence they are trying to conclude economic and trade agreements with countries in the region, transforming regional interactions into lucrative “business relationships”.

4- Controlling strategic resources: The above-mentioned regional powers are seeking to establish full control of the strategic resources in the Arab region, especially energy resources. Turkey seeks to lay its hands on the gas fields discovered in the eastern Mediterranean, threatening to use force to control the massive gas explorations. The same is true of Israel, which challenges Lebanon’s gas exploration in Block 9. In addition, these countries are also in a bid to control the scarce water resources and control water flows, as demonstrated in the aggressive policies by Turkey and Israel towards water issues with neighboring countries.

The future of the Arab region

The participants in the discussion panel argue that the future of the Arab region hinges on the management of regional transformations with the associated pressures and challenges, the most important of which are: restoring equilibrium and internal cohesion in Arab countries, absorbing regional shocks, and dealing with the new reality ensuing from the unanticipated changes in the region, because “the unbelievable has become a reality that must be dealt with”. The disintegration and fragmentation projects of the Arab region, for example, are no longer mere theories in western think-tanks, but they have become a reality in the conflict-ridden states. The key contours of the future of the Arab region are as follows:

1- Managing elections: The upcoming legislative elections in some Arab countries, such as Iraq, are major turning points, with the accompanying political polarization and attempts for intervention by regional and international powers in pursuit of their interests, which make it incumbent upon the national forces to shield the home front against external influences and penetrations and maintain political stability.

2- Restoring community equilibrium: Overcoming political challenges and addressing security threats depend on restoring social cohesion and confronting the culture of skepticism, rebellion, polarization and division, which are promoted by some external powers through social media. The goal is to break up communities and sow the seeds of instability, which in turn would enhance the odds of such powers to penetrate societies and state institutions.

3- The post-ISIS stage: Despite the relative decline of ISIS in Syria and Iraq, it has managed to relocate to alternative bastions in the Arab region, such as Libya, with the help of some regional powers which provided ISIS members with a “safe exit” and helped them regroup in Libya. In addition, ISIS-affiliates spread throughout the Arab region and in West Africa and Somalia. Thus, there is a need to counter the attempts by ISIS members to penetrate the Arab countries and dry up the sources of extremism and terrorism in the Middle East.

4- Shifting internal conflicts: Internal balances of power have changed in the most intense internal conflict in the Arab region, as Assad’s departure is no longer a demand of regional or international powers, the Syrian opposition does not insist any longer on this demand as part of the settlement process, and the conflict has moved to the stage of dividing the spheres of influence between regional and international powers involved in Syria, such as Russia, the United States, Iran and Turkey.

5- Confronting border security threats: The Arab states face a wide array of threats stemming from border flows and the upswing in smuggling weapons, trafficking activities, and the movement of terrorist organizations across the borders between Arab countries, which give prominence to securing the borders and responding to the policies of attrition pursued by regional and international powers against Arab states through cross-border threats. For example, the precarious security situation in Libya poses a direct threat to the Egyptian national security and requires preventive measures to fend off the threats and buttress the borders.

6- Absorbing economic pressures: Addressing economic challenges is an important determinant of the ability of Arab states to bolster internal political stability; Tunisia is a case in point. Political stability rests on the ability of the state to restore the growth of the economy, alleviate pressures on the lower-income sectors, and boost the national resources to sustain public services.

In conclusion, the Arab region faces numerous threats from the periphery states and international powers. There are attempts to impose alternative projects and redraw the map of the Arab region through fragmenting the Arab countries and establishing multi-statelets relations governed by protracted conflicts. Moreover, there are efforts to foment ethnic clashes, deepen political polarization, support armed non-state actors and proxy conflicts. Hence, the Arab states and societies should anticipate these threats and adopt proactive policies to augment national capabilities, cement internal cohesion and counter external interventions.