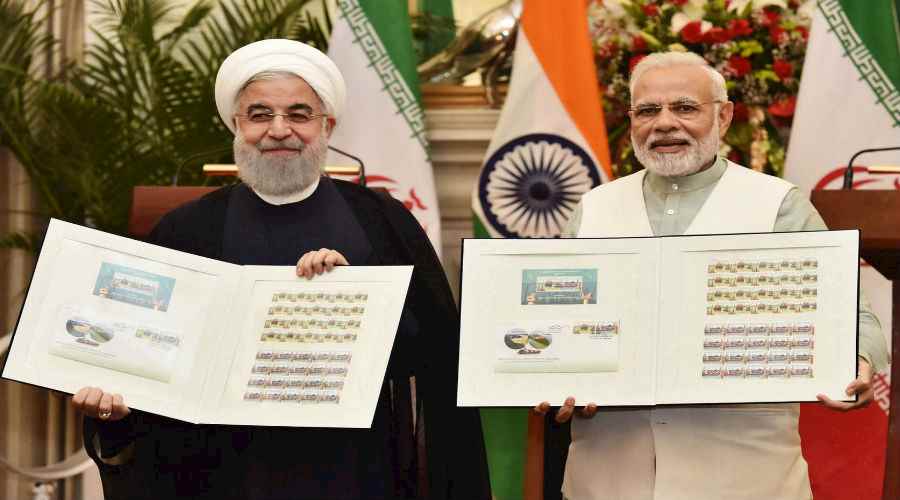 On February 17, 2018, Iran and India signed an agreement allowing New Delhi to lease Iran's Chabahar Port. The move reflects growing economic relations between the two countries after international economic sanctions against Iran were lifted as part of the nuclear deal with the P5+1 group of world powers. Over the past few months, Iran restored its position as India’s third largest crude oil supplier. Moreover, the two countries seek to expand their ties to include other investment venues including road networks and oil exploration.

In fact, the latest development comes at a time when Iran is in dire need of a reliable investment and trade partner, because its partnerships with European countries faltered after the United States recently ratcheted up non-nuclear sanctions against Tehran.

Although India too can make several gains from stronger relations with Iran, including securing energy resources and access to Iran’s big market, tightening  international sanctions against Iran represents a major concern that can block any future progress of economic partnership between the two countries.

The signing of the recent agreement that allows Iran to lease part of Iran’s Chabahar port to India for 18 months is a continuation of efforts made by the two countries over the past two years to promote their partnership. The efforts were reflected in an exchange of visits by economic and business delegations from both countries seeking to support trade and mutual investments.

During Indian Prime Minister Narendra Modi’s visit to Tehran in May 2017, eight memorandums of understandings were signed to enhance trade and economic cooperation. Moreover, New Delhi, Tehran and Kabul signed a trilateral agreement to enhance shipping and road development, secure a safe passage to Afghanistan's markets and export goods and minerals from Afghanistan to regional markets.

Remarkably, India insisted on the US$85 million Chabahar Port development deal although preparations for the implementation of the project were made over several years. The reason is that it is one of the vital strategic projects between the two countries. The port would help boost their mutual trade and allow Iran access to Central Asia and Afghanistan. Moreover, India already used the post to export wheat to Afghanistan.

Cooperation between India and Iran is not limited to ports. India showed readiness to pump $20 billion in investments into Iran’s energy sector, other industries and petrochemicals in particular, according to statements delivered in April 2016 by Indian Oil Minister Dharmendra Pradhan. However, it should be noted that except for the recently-signed agreement on Chabahar Port, none of these planned projects has made any significant progress.

The energy sector is among the vital venues of cooperation between India and Iran. During Iranian President Hassan Rouhani's recent visit to New Delhi, India's Ministry of Petroleum and Natural Gas said Indian oil companies would increase oil purchases from Iran in the coming months.

India received about 266,000 barrels per day (bpd) of oil from Iran in November 2017, a decline of 55 percent from a year ago. Undoubtedly, these plans will cement Iran’s position as India’s third-largest oil supplier. Additionally, India continues to have ambitions to reach an agreement with Iran on constructing a sub-sea natural gas pipeline to carry Iranian supplies from Chabahar Port to its Porbandar port.

India also showed readiness to expand its investment partnership with Iran to boost oil production. India oil companies are interested in getting a share of Iran’s South Azadegan oilfield, according to Iran’s Ministry of Petroleum. The plans would help triple trade between the two countries to $30 billion, from $10.2 billion in 2016, according to Iran Chamber of Commerce, Industries, Mines & Agriculture.

Iran’s plans to further boost its economic partnership with India, just like powers such as Russia and China, come at a time when it is facing various domestic and foreign pressure.

At the foreign level, Iran continues to face difficulties in attracting foreign investments from European countries, especially after the United States imposed new non-nuclear sanctions against the Iranian Revolutionary Guards Corps in 2017. The move slowed down several investment agreements signed between Iran and European companies, especially France’s Total which signed a deal with Iran for the development of phase 11 of Iran’s South Pars gas field.

Based on this, it is perhaps safe to say that through cementing relations with India, Iran seeks to find new alternatives and avoid being under international isolation once again. At the same time, India too seeks to increase investments in Iran’s vital sectors, such as the oil and gas industry, road networks and others.

Additionally, India is a rising economic power on which Iran can rely to attract investments, gain access to technology, credit facilities and technical expertise. Moreover, through building a reliable trade partnership with India, Iran can secure supplies of a number of goods and services that are hard to receive from European markets.

India’s leadership has the view that despite geopolitical risks, cementing partnership with Iran is needed to support trade in Central Asia, especially because Pakistan seeks to develop Gwadar Port in cooperation with China. In addition, both Pakistan and India seek to promote their relations with countries such as Tajikistan, Turkmenistan and others, which represent big markets for Pakistani and Indian goods.

India has special interest in stronger oil partnership with Iran, which represents a vital source of crude supplies and natural gas. This is evidenced in India’s insistence on carrying out a plan to build the sub-sea natural gas pipeline from Chabahar Port to Porbandar Port. If completed, the project can contribute towards enhancing and diversifying India’s sources of natural gas supplies, while investments pumped by Indian companies in the Iranian market can play a critical role in securing supplies for Indian refineries.

At first glance, India’s bid to cement its economic relations with Iran seems to imply a conflict of interest with third parties already maintaining strong relations with the Subcontinent.

On the one hand, India is in strong economic partnership with a majority of Arab countries, but at the same time takes positions against Iran’s policy towards the region. Additionally, India expanded its military and economic cooperation with Israel before tensions escalated dramatically between the Jewish State and Iran recently.

On the other hand, Pakistan looks forward to expanding cooperation with Iran, in the energy sector in particular. Perhaps Iran cannot afford ignoring Pakistan’s request for crude and natural gas in the future. In this context  persistent tensions between Pakistan and India certainly cannot be ignored. Overall, all these variables indicate that Iran and India’s quest  for stronger relations is, at this stage, facing multiple hurdles.

Moreover, it seems that progress of India-Iranian relations will fall, at a certain stage, under scrutiny by the United States which is seeking further sanctions against Iran and push other world powers to limit their trade and investment relations with Tehran. This can possibly force India to put several investment deals with Iran on hold, just as it postponed the Chabahar Port project several times in the past in anticipation of new U.S. sanctions on Tehran over its nuclear program and state sponsorship of terrorism.

In light of this, it can possibly be argued that despite recent successive developments in economic relations between India and Iran, geopolitical risks may very well hinder the progress of their economic partnership in the future.