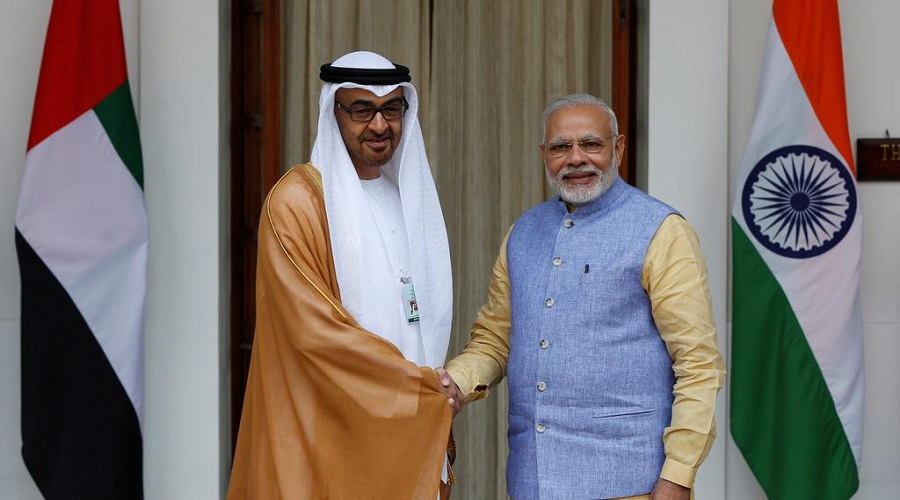 Indian Prime Minister Narendra Modi has visited the United Arab Emirates for the second time in his close to four-year tenure, as a special guest of the 6th World Government Summit – an annual conference held to discuss evolving trends.[1] The current edition of this event was centrally focused on ‘advancing happiness’, while touching upon aspects of big data and climate change among others. [2]

These developments signify a period of robust relations between the two nations, since their independence in the years 1947 and 1972 respectively. This article looks at the upswing in the current relationship between UAE and India, while exploring the various dimensions of this bond.

India and UAE’s relationship have been on an incremental rise over the past years. In modern history, the two nations have been interlinked due to three main aspects namely; economic migration, energy purchase and trade of goods.

Firstly, Indian blue and white-collar migrant workers have played a significant role in the development of the Gulf nations. Many Indians, mainly from the coastal regions such as Kerala, Karnataka and Gujarat have migrated to UAE, especially since the 1980’s. There has been a steady rise in the number of Indian expats from just under 1 million in the year 2000 to about 3.3 million in the year 2017.[3] Those expats have provided the largest sources of remittances to India contributing almost 62 billion USD to the economy in the year 2016. [4]

Secondly, India has also been a major buyer of oil, especially after 1991 when the Soviet Union, India’s main oil supplier, disintegrated. This was also accompanied with an exponential increase in energy requirements, due to India’s adoption of liberal economic reforms, which spurred infrastructure industries across the country. Thus, India’s trade in oil with the UAE surpassed 250 billion USD in the past five years. [5]

Thirdly, India has also been a major exporter of goods to the UAE, currently occupying the position of the UAE’s largest trade partner. According to an Indian Ministry of External Affairs brief, India has a diverse basket of goods that is exported to the UAE including “Petroleum Products, Precious Metals, Stones, Gems & Jewellery, Minerals, Food Items, Textiles and Engineering & Machinery Products and Chemicals”, among others. [6]

In the recent years, the changing geopolitical context of the Asian continent have impelled the two countries to come closer to each other. During the presidency of Barack Obama in the United States’ (2008 – 2016), the US began to gradually disengage from the Middle Eastern nations, following an expensive war in Iraq and increasing attempts to sustain its energy independence.[7] India seized this opportunity to step up its defense and security relations with the Arab nations including the UAE.[8]

Under Prime Minister Modi’s stewardship, the two nations experienced an even quicker convergence of foreign policy interests. Significantly, his Highness Sheikh Mohammed bin Zayed al-Nahyan, Crown Prince of Abu Dhabi and Deputy Supreme Commander of the UAE armed forces, attended India’s Republic day celebration on January 26, 2017, an event that elevated the two states’ relationship to a strategic partnership.[9] During this visit, PM Modi urged UAE to bring about peace and stability in South Asia and signed several pacts on issues of strategic importance. Thus, a few new features are prominently highlighted in the dialogues between the two nations.

The first of these features is the defense pacts that are beginning to form the cornerstone of the new Indian-Emirati relations, given India’s desire to expand ties beyond just migration and oil. This was seen when UAE expressed its interest in India’s ‘Make in India’ Defense projects, whereby it would buy military equipment from India.[10] Furthermore, the two countries have also conducted various joint military drills and training programmes to encourage better military-military contact and further promote cooperation. [11]

Secondly, maritime cooperation is another field that has been gathering steam. In this regard, the first strategic dialogue held in January 2017 noted the need "to provide further impetus to these relations, including through joint exercises, training of naval, air and land forces, as also in the area of coastal defense and through participation in defense exhibitions etc."[12] For New Delhi, the Arab Gulf nations and their water ways serve as important gateways to export and import goods into parts of West Asia.

Furthermore, India has been involved in conducting various naval exercises with the Arab nations including UAE, Oman and the Saudi Arabia among others to enhance capacities and deal with larger challenges. These exercises and ties are also important for UAE and the neighboring region, given the current level of instability in larger West Asia that often threatens to block strategic chokepoints along the littorals of these countries, cutting off valuable sources of oil income. [13]

Finally, India has also begun to ramp up its joint counter terrorism efforts with UAE and the other gulf nations. Due to the advent of the Islamic State and its targeting of various governments across the world, both UAE and India have become cognizant of the latent threat of Jihadist militants in their respective countries. This concern was amplified with the discovery, arrests and deportations of various Indian Islamic State branches in UAE like the Ras al Khaimah Module and the Abu Dhabi cell, as well as ideologues such as Nicky Joseph who was involved in recruiting Indians for the group.[14] Thus, the two countries have begun to incorporate better information sharing mechanisms and mechanisms to crack down on terror financing.

Going forward, there will be many new avenues and challenges that will confront the two countries.  Among the most lucrative of options for boosting bilateral relations is the increase of trade to about 100 billion dollars by 2020.[15] Currently, the UAE's investments in India are distributed across five sectors: construction development (16 percent), energy (14 percent), metallurgical industries (10 percent), services (10 percent), and computer software and hardware (5 percent).[16] With the current administration’s mantra of development featuring as a mainstay of advancing economy, India will definitely hope to clinch many new business deals in these sectors and others to ensure these relations come to fruition.

Moreover, both India and the UAE will also have to deal with new evolving challenges such as automation and the consequent disruption of the traditional labor industry, which will undoubtedly affect the flow of labor from India to UAE. Additionally, challenges like fake news and its effects on communal harmony is something that both countries can work towards. Given that these factors have already sparked off tensions in part of India, addressing such challenges raise new talking points which also enhances cooperation. [17]

Policy makers, however, need to keep many other limiting factors in mind too. The UAE prides itself as one among the islands of stability in an ocean of unstable middle-eastern nations. This regional chaos will always be a threat lurking in the background demanding higher expenditure towards security and defense of the nation. Moreover, India’s shaky progress in implementing new infrastructure deals domestically casts doubts on its ability to deliver on some of its joint investment projects.[18] This can be a cause for slowing progress between the two nations in the future.

In sum, bilateral relations between the two nations, which was characterized by the exchange of labour, oil and other goods, now witnesses new advancements in the field of mutual defense, naval and counter terrorism interests. Given the increased interdependence of India and UAE, robust bilateral ties are expected to be a feature of the relationship that will not change except under phenomenal circumstances.

[17] Sandip Roy. “2017 saw fake news entering the mainstream, and us getting quite comfortable with it”. Economic Times. December 29,2017. https://blogs.economictimes.indiatimes.com/et-commentary/2017-saw-fake-news-entering-the-mainstream-and-us-getting-quite-comfortable-with-it/