What are the Reasons behind the Protests in Iran? 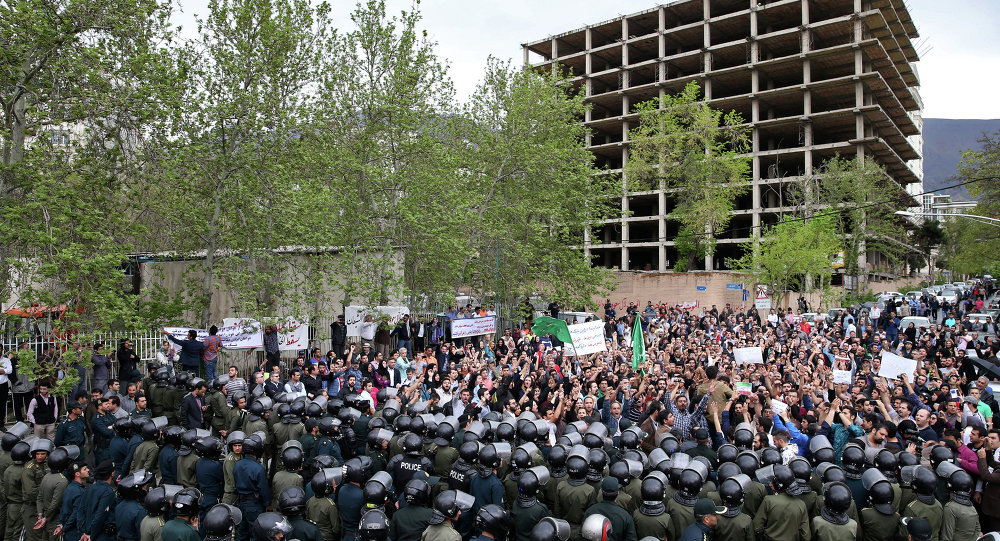 The ongoing protests in Iran have begun in Mashhad not Tehran, which makes a huge and highly significant difference as to the nature of the protests and their primary causes, as well as their possible paths over the next stage. Traditionally, protests in Iran start from the capital and are led by the upper middle class, the main driving force of any political transformations Iran has witnessed in the past several decades. These transformations include the revolution that overthrew the regime of Shah Mohammad Reza Shah Pahlavi in 1979, which began as a national movement before turning into an Islamic revolution, with the participation of most political forces at that time. Nonetheless, the clerics ultimately managed to dominate for many considerations due to their organization and the presence of Khomeini who, at least in the first stage of the revolution, was able to contain the differences between competing powers, which were substantial and seemingly irreconcilable.

The rise of actors

It may be argued that the current protests began spontaneously by disgruntled segments of citizens against the unprecedented living pressures ensuing from government policies. These pressures are evident in the high unemployment rate that reached 12%, which may be higher in some peripheral provinces that do not receive much attention from the government, to about 60%, and the inflation rate that soared to more than 8%, according to official estimates.

Worsening living conditions have coincided with the growing dominance of the military, with its various branches, over up to 25 to 40 per cent of the Iranian economy and its mounting pressures on President Hassan Rouhani to increase its financial allocations in the new budget. This has already been done, with the Revolutionary Guard budget reaching about $7.5 billion in the new budget, in addition to the other financial allocations for the regular army and the Basij forces.

However, these protests have begun to snowball and spread both horizontally and vertically. Horizontally, demonstrations spread from Mashhad to other provinces, such as Kermanshah, Ahvaz, Bandar Abbas, Kurdistan, Khorramabad, Najafabad, Hamadan, Isfahan, and Tabriz before reaching Tehran.

Vertically, they have evolved from mere protests against the deplorable living conditions to demonstrations of political dimension. Their demands have been broadened to include exerting pressure on the regime to stop supporting its allies abroad, whether they are political regimes as the Syrian regime or non-state actors as the terrorist and armed sectarian groups, notably Hezbollah, Houthi movement, and the Popular Mobilization militia. These sectarian militias which the Iranian government has formed and trained from Pakistani and Afghan Shiite elements.

Yet, there are several observations to be considered when trying to understand the current wave of protests, which can be outlined as follows:

1- Lack of leadership: The current wave of protests lacks leadership, perhaps the secret of its power, because this makes it hard for the security forces and authorities to contain it or prevent it from spreading to other cities and provinces. Here, it may be argued that the absence of leadership is the hallmark of the current protests, making them unique compared with the previous waves of protest in Iran, the most recent of which are those erupted in June 2009, led by the so-called Green Movement that rallied against the outcome of the 2009 presidential elections and the 'disputed' victory of the former President Mahmoud Ahmadinejad and the beginning of his second presidential term.

The momentum and impact of 2009 protests quickly diminished under the severe restrictions imposed by the authorities on their leaders, notably Mir Hussain Mousavi, the last prime minister of Iran, before abolishing the post in 1989 and Mehdi Karroubi, president of the former Shura Council. These restrictions peaked when Zahra Rahnavard, the wife of Mousavi, was kept under house arrest since February 2011 after they both called on holding demonstrations in support of the Egyptian and Tunisian revolutions.

Although some opposition forces in exile, primarily the Mujahideen-e Khalq (MEK), have hastened to intervene and back the protests, there are still no indications to show a prominent role for those forces in inciting the Iranian people against the regime.

2- Reformists are reluctant to support the protests as happened in 2009, which may be due to fears of persecution by the regime in case if the crisis ends in its favor, especially in light of their suffering following the failure of 2009 protests. The former president Mohammad Khatami has since been under quasi- house arrest, and former President Hashemi Rafsanjani, who died on January 8, 2017, had been subjected to similar restrictions, although his family has been further affected. Therefore, it is remarkable that Khatami or any of the prominent reformist figures has not commented on the ongoing protests till now. This may be the case if there are indications that the intensity and scope of the protests can escalate over the next phase.

3- The regime pursues new policies: It seems that the Iranian regime is trying to apply lessons learned both from its internal crisis that erupted in June 2009 and the Syrian crisis that broke out in March 2011. Thus, the regime has not only dealt with the protests with the military tool, especially by the Revolutionary Guards, but has also adopted other tactics in parallel as follows:

A- Holding counter-rallies: The regime organizes pro-government rallies to counter the ongoing protests in multiple provinces and cities, and to send a message that the regime still has a significant popular base. In this context, the regime has taken advantage of the anniversary of the so-called (9 Day 1388 Hijri) corresponding to 30 December 2009, in reference to the demonstrations staged that day to denounce the protests organized by the Green Movement. Indeed, crowds in Tehran and some other cities rallied on December 30, against the so-called “the sedition stream”, in reference to the pro-Green Movement.

B- Shifting the pressure on the government instead of the regime by suggesting that what is happening is a protest against the government not the regime, with the aim of reducing the pressure of the protests on the latter, while at the same time holding the government responsible for the worsening living conditions in the areas that witness growing protests. In this way, they divert the attention from the real causes and motives of those protests, namely spending huge amounts of money in supporting Iran’s allies, whether regimes or terrorist and armed militias in the region. Therefore, many prominent religious clerics and officials have deliberately hinted that the government should respond to the demands of the protesters, to send a message that the regime does not reject these demands, that it responds positively with some of them, and may exert pressures on President Rouhani to make cabinet reshuffle to reinforce this impression.

C- The fundamentalists’ protests: It cannot be ruled out that the Iranian protests in the last four days are partly organized by the conservatives with the aim of embarrassing Rouhani and cornering him to force him to choose among limited options during his second presidential term, thereby reducing the political clout of the moderates before the coming elections.

Consequently, some government officials, such as the Iranian first vice-president, Eshaq Jahangiri, indicated that government opponents were responsible for sparking the protests and their spread to other cities and provinces. This is an overstatement on his part, because the escalating protests are due to the worsening living conditions of citizens, the growing influence of the military and religious institutions and the increasing support by the regime for its allies abroad.

These overlapping moves will have significant impact on the possible paths of the current wave of protests, which will be governed and determined by numerous intermediary variables, based on the balance of internal powers and patterns of relations between various institution and political actors.