The US Stance on Iraqi Kurdistan’s Independence 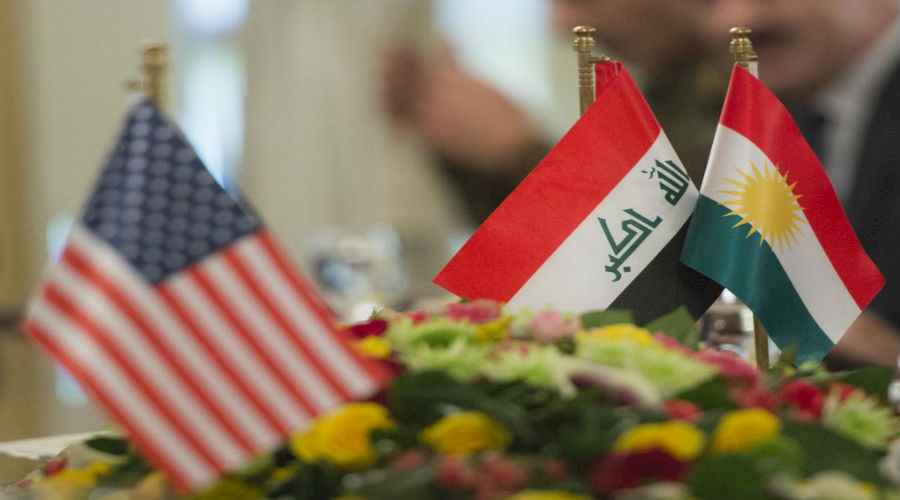 On the September 25, 2017 the Iraqi Kurds voted in favor of secession of Kurdistan from Baghdad in a historic referendum, with approval rate exceeding 92 percent of the 3.3 million, who participated in the poll.

While the results of the vote for secession and the opposing positions of regional and international powers did not surprise the observers of the Kurdish affairs, the position of the US in particular, which opposed the referendum in advance, sounded vague and contradictory. While the US backed the Kurds, it rejected the independence of Kurdistan and chose a neutral stance without allying to either side of the crisis. This came as the Iraqi government, with the help of Popular Mobilization Forces, easily regained Kirkuk. The US further urged the two parties not to engage in military confrontations.

At first glance, it seems that the source of the confusion in speculating the American stance regarding the independence stems from ideological assumptions on the history of US idealistic attitudes in support of the independence and self-determination issues in several regions of the world, or perceptions about the American ambitions and means to achieve them according to the theory of “creative chaos” and fragmentation of the region. These perceptions are reinforced by the convergence and solid cooperation between the US and Kurds, amid the war on ISIS in Syria and Iraq.

However, this confusion and these perceptions ignore the American interests in light of the highly complex geopolitical calculations made in the conflict zones in Syria and Iraq, where interests of several parties, that cannot be ignored, overlap.

The US position on the independence of Kurdistan, taking into account the geopolitical considerations of the American national security, can be divided into two camps:

The proponents of the independence of Kurdistan base their view on the following considerations:

1- Consistency with the historical American values in support of the right of peoples to self-determination, upon which the US supported the independence of Latin America from the Spanish Empire in the nineteenth century, Central and Eastern European independence from the Austrian, Hungarian, German and Russian empires after World War I, the independence of African and Asian peoples from European colonization in the aftermath of the World War II, secession of Eastern Europe under the former Soviet Union following the collapse of Berlin wall, and later within the end of the twentieth century and the beginning of the new century, the independence of several areas, such as Kosovo, southern Sudan, and East Timor.

2- Ending the historical injustice of Kurds in Iraq, in addition to the fact that the Kurds did not enjoy the right to independence and establish their homeland after the collapse of the Ottoman Empire, they have lived dispersed among four countries (Iraq, Syria, Iran and Turkey) as marginalized minority, vulnerable to persecution. Kurds have suffered persecution, particularly in Iraq under former President Saddam Hussein, which amounted to attempt to wipe them out by striking the Kurdish town of Halabja with chemical weapons - nerve and mustard gases- in 1988, killing about 5000 people, mostly women and children. Thus, the proponents of this stream of thought view the independence of Kurdistan as an attempt to redress the historical injustice to which the Kurds have been subjected for over a century.

3- Protection of minorities in Kurdistan, including tens of thousands of Christians, who fled the country in post-Saddam era for fear of persecution or arrest or murder by ISIS, after the latter captured vast swaths of Iraq. This is in addition to other minorities, such as Shabak and Yazidis, which have also fled to Kurdistan for similar fears, where the region and its government were more tolerant towards minorities compared to other Iraq areas or countries in the Arab region.

4- Rewarding Iraq’s Kurds who were closer to the West and collaborated with various American administrations since Iraq’s invasion of Kuwait. This cooperation has increased with the emergence of ISIS, where the Kurdish Peshmerga forces proved to be the most effective in the war on ISIS, achieving the goal of the US in eradicating the organization without forcing Washington to plunge its troops into a new war quagmire. Thus, Kurds helped the US avoid incurring more heavy losses similar to those sustained during the Iraqi occupation.

The arguments of this camp, the more influential in the US political and academic circles, are grounded on the American geopolitical interests in the region. Its proponents reject Kurdistan’s referendum and consider it ill-timed, for a variety of reasons as follows:

1- Priority of the US war on ISIS: They believe that supporting the independence of Kurdistan at the present time could adversely affect the course of the war led by the US on ISIS, a priority for the US national security strategy issued in 2015.

According to a statement issued by the White House on September 15, 2017, the independence of Iraqi Kurdistan could distract the attention from efforts to defeat ISIS, stabilize the liberated areas, destabilize the disputed areas, because it opens the door for provoking the regional influential actors, such as Iraq, Turkey and Iran. These concerns were confirmed by the Special Presidential Envoy for the global coalition to counter ISIS, Brett McGurk, at a press conference in Erbil in mid-September, in which he described the referendum as “risky” and lacked international support. Moreover, there are more pressing priorities on the US agenda that are more important than Kurdistan’s referendum, such as North Korea, the Iranian nuclear agreement and Gulf disputes, meaning that the Kurdish crisis could wait or be postponed, at least from the US perspective.

2- Antagonize the Iraqi government: Supporting the secession could jeopardize the relations between Washington and Baghdad, which rejects the independence of Kurdistan because of oil wealth, and for fear it fuels sectarian separatism in Iraq. For these reasons, the US administration is aware that antagonizing the Iraqi government would mean a possible loss of an important ally in the war on ISIS, and may drive Iraq away from the US and push it towards further rapprochement with Iran. This comes amid US attempts to contain the Iranian influence in the region.

3- Could boost Iranian influence: The US is keenly aware that backing Kurdish independence could cause a hostile reaction from Iran, which views the independence as a threat to its territorial integrity and a catalyst for separatism for around 10 million Kurds.

Given the growing influence of Iran-backed Shiite militias in Iraq, which became a formal part of the Iraqi security forces; backing the independence of Kurdistan could trigger off a hostile Iranian reaction in Iraq and push it to adopt a discourse that defends the unity of Iraq and stokes hatred against the US, as a superpower to be blamed for fragmenting Iraq into statelets. Such discourse might gain popularity, not only in Iraq, but also across the Arab world.

4- Fuel tensions with Turkey and impact NATO: The US did not support the independence of Kurdistan lest this exacerbates the already existing tension between Washington and Ankara, a staunch NATO ally. Turkey fears that the independence of Iraqi Kurds could inspire its own Kurds to secede, the very same fears which prompted it to intervene militarily in the Syrian conflict in order to isolate the Kurdish areas in its lands from Kurdish concentration areas in Syria. For the same reasons, Turkey launched full-scale war against its own Kurds.

In other words, the US support for the independence of Kurdistan could push Turkey towards hostile reactions, to distance itself from the Western world and NATO and seek further rapprochement with its adversaries, particularly Russia, given the fragility and uncertainty of the international system.

In conclusion, the close relations between the US and Iraqi Kurds in the war on ISIS created expectations that Washington will take a supportive stance towards the independence of Kurdistan Iraq. However, intricacies of the geopolitical situation in the region’s conflict zones were the main determinant of the US position, preferring to maintain the status quo, which seemed contradictory to some people. The priority of the war on ISIS and fear of losing the Iraqi ally in this war, concerns over the growing Iranian influence in Iraq and the escalation of the dispute with Turkey, all of which have had the final say in shaping the US position against holding the referendum on independence. The US saw no immediate priority, at least, amid a packed agenda with other more pressing issues, to its national security considerations.