Is a “Convergence of Necessity” behind Iranian Chief of Staff’s Visit to Turkey? 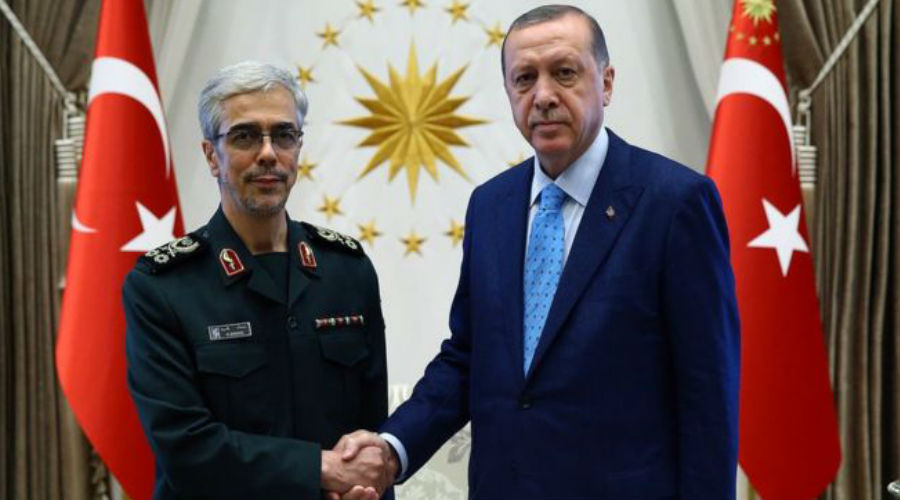 Turkey and Iran appear to be bent on upgrading political and security coordination over regional developments of common and special interest. This was evidenced by Iranian Chief of Staff General Muhammad Bagheri’s three-day visit to Turkey on  August 15, 2017.  This visit indicates that a “convergence of necessity” is headlining relations between the two regional powers despite a number of pending issues between them.

Without a doubt, this convergence cannot be dissociated from plans being made by Kurdistan Region to hold a referendum on secession from Iraq on 25 September, 2017. It also can not be dissociated from the Astana talks on the Syrian crisis, which are sponsored by Turkey and Iran, along with Russia. Moreover, War against ISIS is escalating in Raqqa City, Syria, and at a later stage in Deir Ezzor, after the organization was defeated in Mosul, Iraq. The scale of this war may expand further to include the Syrian province of Idlib, which is largely under the control of Jabhat Fateh al-Sham (previously al-Nusra Front).

What should be noted is that Major General Bagheri headed the Iranian delegation in the first visit by an Iranian chief of staff to Turkey since the 1979 revolution. This indicates that the two countries were keen to ensure that the head of the delegation is a commander from the Iranian armed forces and not the Iranian Revolutionary Guard Corps (IRGC or Pasdaran). This is so, despite the fact that the IRGC are in charge of Iran’s most important extraterritorial military interventionist operations through their Quds Force, headed by Major general Qasem Soleimani as well as allied militias operating in Syria and Iraq, such as the so-called Popular Mobilization Forces (PMF) -a militia better known as Hashd al-Shaabi- and  Lebanon’s group Hezbollah and others.

One explanation of this could be that an Iranian delegation headed by  Pasdaran commander Soleimani in particular would create problems for Turkey. These include accusations of dealing with a figure who is under a UN travel ban and whose movement in crisis-hit countries such as Iraq and Syria (he appeared in the Syrian city of Aleppo and the Syrian-Iraqi border) draws sharp criticism from powers interested in Iran’s roles in the region.

In other words, unlike Soleimani and other figures who represent the radical ideological aspect of the IRGC, which is the most active element in Iran’s extraterritorial political and military movements, Bagheri, represents the institutional aspect of the Iranian armed forces and would not cause an international crisis by visiting Turkey.

That is why it is likely that Turkey requested this arrangement, given, in particular, that Bagheri met with Turkish President Recep Tayyib Erdogan, who is expected to visit Iran soon, and Turkish Defense Minister Nurettin Canikli,and Chief of the General Staff of the Turkish Armed Forces Hulusi Akar. The reason could be that Turkey wants to avoid any embarrassment with the United States. Another is that Turkey also wants to make sure that it is not sending across wrong messages that would further widen current disagreements with the United States over certain issues, including Washington’s support for the Kurdish People's Protection Units in Syria, and Washington’s reluctance to extradite Fetullah Gulen to Turkey after he was accused of plotting the failed July 15, 2016 coup.

However, to avoid sending a controversial delegation to Ankara, Iran sent commanders of the IRGC main branches such as Brigadier General Mohammad Pakpour of the ground forces, in a bid to involve the IRGC in Bagheri’s talks with the Turkish top brass. Moreover, the fact that Bagheri himself is a former IRGC officer, and carried out several missions for the IRGC’s intelligence service, cannot be ignored.

In addition, Bagheri wanted to emphasize that his visit to Turkey has received the green light from Iran’s supreme leader Ali Khamenei. This is a particularly significant point. His aim is not only to bestow additional importance on a visit that is of special importance for Khamenei, but also to send across the message that Iran’s military establishment receives its orders from him, and that it enjoys some independence from President Hassan Rouhani. The president’s disagreement with the military establishment has recently widened after he called it to keep away from politics and criticized its wide influence on the country’s economy.

The composition of the Iranian delegation, as well as the circumstances surrounding its visit to Turkey, reveal the nature of bilateral and regional issues topping the agenda of Iranian Turkish talks.

The first issue is the Turkey-Iran common border, which, according to several reports, has become the scene of a burgeoning trafficking trade and infiltration of terrorists and Kurdish militants. The issues appears to be another reason why Brigadier General Qasem Rezaei, the commander of Iran’s border guard, was included, along with the commander of the ground forces Brigadier General Mohammad Pakpour, in the delegation accompanying the chief of staff to Ankara.

Certainly, this is linked to Turkey’s current plans to build a security wall along its frontier with Iran, similar to that on its border with Syria, to bolster its efforts to counter increasing security turmoil caused by terrorist attacks and the continued conflict with the Kurdistan Workers' Party (PKK).

The second issue revolves around continued understandings about the crisis in Syria, regarding, in particular, attempts by the Kurds to make significant political gains from their role in the war against ISIS. That is why both Turkey and Iran have an interest in maintaining their political and security understandings about developments in the ongoing conflict between the regime and its Iranian-backed allies and the opposition forces backed by Turkey, among regional powers.

However, what stands out in this context is that these understandings are not limited to the issues discussed during the Astana talks about the so-called de-escalation zones. They also include coordination about dealing with any possible developments on the ground in the Syrian city of Idlib after Jabhat Fateh al-Sham seized control of large swathes of territory.

Some indications emerged that Turkey seeks to coordinate with Russia and Iran about preventing Fatah al-Sham from maintaining its control of Idlib to avoid relying on any role for the Kurds in an anticipated military campaign. One such indication is that Turkey recently announced that the Russian chiefs of staff Valery Gerasimov will visit Ankara soon.

The third issue is regarding field and political developments taking place in Iraq. The two states appear to be seeking to ease off their tensions that previously escalated over the situation in Tal Afar where the Iraqi government forces are preparing to storm the city to drive out ISIS. This is of special importance of Ankara which on several occasions warned that the so-called Hashd al-Shaabi militia has committed crimes against the Turkmen population of Tal Afar as it previously did in cities liberated from ISIS. The tension, sometimes, prompted Tehran and Ankara to issue statements criticizing each other's foreign policy.

Undoubtedly, the September 25 referendum in Iraq’s Kurdistan Region topped the agenda of talks held between Turkish and Iranian officials. The two states are looking forward to prevent Iraq’s Kurds from taking such a move that would impose negative consequences on both domestic balances of power and regional calculations.

This stance was reflected in statements delivered by General Bagheri, after his meeting with President Erdogan, saying “the Kurdistan Region’s referendum should not take place.” The statement implies that Iran can seek to work on preventing the Kurds from continuing preparations for the referendum. It may rely on the widening opposition and reservations from several regional and international powers, including the United States.

Nonetheless, these understandings can be only temporary as disagreement and issues between the two powers would surface again, depending on whether certain regional and international circumstances take shape, given, in particular, that these issues are not easy to settle. That is, their efforts to contain disagreement would face difficulties in the future, especially because the trajectories of the crisis in Syria become increasingly obvious, and also because of the outlook for the outcome of the current escalation between Iran and the United States over the nuclear deal and Iran’s destabilizing regional role.