Why Unsophisticated Tactics are utilized by ISIS? 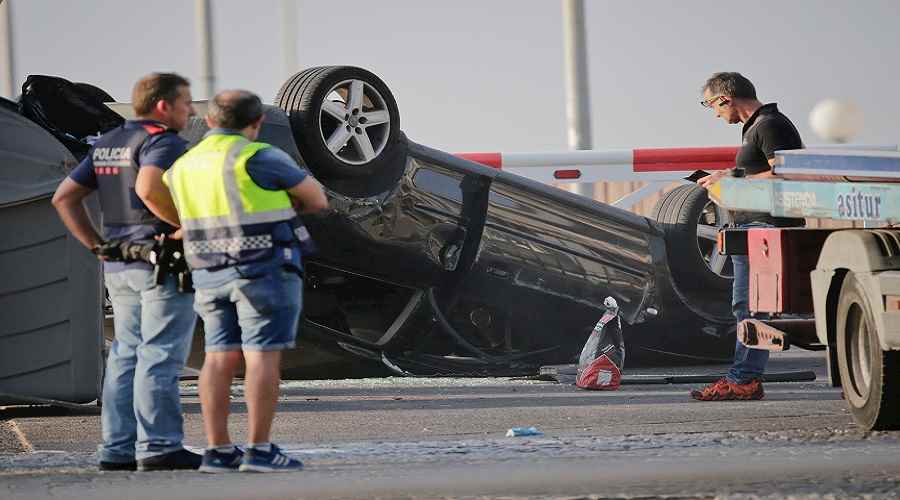 Spain witnessed twin terrorist attacks that targeted Barcelona and the seaside resort of Cambrils, leaving at least 14 dead and 100 injured on August 17. On the following day, a stabbing attack occurred at two markets in the Finnish city of Turku, south of Finland, which resulted in killing two people and injuring six others.[1] In Russia’s northern city of Surgut, a third assault happened as a knife attacker stabbed eight people on the street on August 19, 2017.

These developments have raised concerns regarding the unsophisticated techniques that ISIS is utilizing in directing its attacks in Europe.

The article will shed the light on such unsophisticated techniques, namely ramming, stabbing and derailing the trains. In addition, it will assess why terrorist organizations increasingly resort to these tactics. Finally, it will evaluate the efficiency of the measures taken by law enforcement agencies in European countries to counter those threats.

By reviewing the terrorist attacks inspired by ISIS and al-Qaeda in Europe, or incited through their media outlets, one could discern three major tactics:

1-  Ramming tactics: The use of vehicle-ramming as a terrorism technique is a relatively recent innovation. ISIS spokesman Abu Mohammad al-Adnani began endorsing vehicle-ramming in 2014.

The third edition of ISIS’ Rumiyah magazine, published in 2016, included an article titled "Just Terror Tactics" that outlined the features of ideal vehicles to use in terror assaults. It further presented an extensive analysis regarding the choice of targets.

Moreover, last month, ISIS affiliates in Turkey released the “Lone Wolf Handbook”, a manual of 60 pages that explains the most efficient ways to make a bomb or drive a truck into pedestrians. [2]

Western countries started to feel the negative impacts of this tactic. In the US, the Transportation Security Administration report on threat of vehicle ramming attacks, notes that from 2014 through 2017, 17 ramming attacks occurred worldwide, resulting in 173 fatalities and 667 injuries.[3]

2-     Stabbing Tactics: Rumiyah magazine provided further tips for knife attacks. It stated that "Vehicles are like knives, as they are extremely easy to acquire."[4] Stabbing, as a terrorist tactic, is sometimes used as a tactic alone, similar to the last attack occurred in Southern Finland, or February 2017 attack in south west France. In other situations stabbing is used along with other tactics, like ramming, as evident in Westminster attack on March 22, 2017, and June 2017 London Bridge attack.

3-     Train derail: Al-Qaeda in the Arabian Peninsula (AQAP) in its 17th edition of its “Inspire magazine” called upon its supporters to strike trains in the US and Europe. The magazine provided its readers with an 18-page guide for building a train derailment device. Previously, in 2013, Canadian authorities arrested two terrorists affiliated to al-Qaeda, who were plotting to derail trains traveling between Toronto and New York City. [5]

The main causes that terrorist group use unsophisticated techniques could be attributed to the following reasons:

1.     Evading Security measures: Vehicle-ramming or stabbing attacks are comparatively easy to plan and carry out without detection. Terrorist organization are directing their sympathizers to utilize tactics that make it extremely difficult for the police to trace and prevent the attack before it is carried on. AQAP, for instance, has put step by step guide in order to construct a metal derail device. AQAP stated that it will keep the assailant “away from using any electronic tools or tools that are specially used in construction … to hide your tracks from forensics after the operation."[6]

On the other hand, other forms of attacks, such as bombings, require a certain level of expertise. Without such level of expertise and knowledge the bomb may end up exploding, as evident in Spain attack, as the perpetrators originally planned to use explosive devices, but their plans were foiled after bomb-making materials accidentally blew up their house in Alcanar. [7] In addition, it is more risky, as bombs’ components need to be purchased in large amounts from available commercial materials, [8] which could put the perpetrator under the police radar.

Furthermore, ISIS directed attacks in Europe, as in Paris attack in November 2015, takes months of preparation and planning, which increase the risk of being exposed by law enforcement agencies.

2.     Increasing the Economic cost: The immediate economic costs of terrorism are the destruction of life and property. The 2016 truck attack in Nice, for instance, killed 86 people and injured hundreds. [9] Moreover, there are indirect economic cost for countries that depend heavily on tourism, as those states suffer significant economic losses from the persistence of terrorism. Various statest such as Egypt, Italy, Kenya and Turkey have suffered declines in tourism-related spending and foreign direct investment as a result of terrorism. [10]

This economic dimension is evident in ISIS calculations, as the last attack targeted Barcelona’s famous Las Ramblas avenue, one of the most important tourist attraction, which is filled with tourist attractions including the city's famed opera house and a Baroque palace. [11]

Moreover, by targeting a touristic area, ISIS could inflict losses for increasing number of countries, as among the dead and injured are people with different nationalities from 34 countries including France, Pakistan, Spain, the Netherlands, China, Venezuela, Mauritania, Australia, Britain and the United States. [12] This will assist ISIS in its propaganda, and urge other sympathizers to continue carrying on other attacks.

There is an additional economic cost that stems from imposing counterterrorism measures. According to Inspire, AQAP magazine, USD 4,200 was spent on an attempt to blow up cargo planes in 2010 forced the West to spend billions of dollars on additional security measures. This made the operation effective, even though no one was killed and the plot was thwarted, according to AQAP. Likewise, in AQAP’s Train derailments article stated that they will “continue to bleed the American economy [with] more losses.” [13]

3.     Defying Europe’s security measures: The United Kingdom was considered to be one of the safest countries, until ISIS stormed UK with three subsequent attacks in the first half of 2017. In addition, ISIS last attacks targeted Spain, which managed over the past decade to avoid terrorist atrocities.

Madrid employed a counter-terrorism strategy that is different from other states including France, Britain, Germany and Belgium. Since 2015, the country’s police and intelligence services have managed to intervene at the earliest possible moment, arresting suspects even before they plot a possible terrorist assault. For example, jihadi suspects are often convicted for crimes such as sharing terrorist propaganda online. [14] Despite these measures, Spain did not manage to thwart the last terrorist attack.

4.     Emphasizing its position in Jihadi landscape: The recent attacks reveal ISIS dedication to carry on attacks in the west, which could be attributed in part to their willingness to prove they are still effective despite the territorial losses. [15] They further aim to particularly target the European countries (including Spain), which are part of the international coalition fighting ISIS in Syria and Iraq. [16] It should be taken in consideration that all terrorist attacks that targeted Europe, were carried on by ISIS rather than Al Qaeda, despite the latter’s repeated calls to its sympathizers to carry on attacks in the west.

In an attempt to stop unsophisticated attacks, particularly ramming attacks, many European countries have resorted to the following measures:

1-     Increasing the number of armed street patrols to deal with the threat, and police are now well versed in how to respond to such incidents. [17]

3-     Introducing new security measures on roads: such as metal or concrete barriers – in a bid to protect pedestrians and crowds. However, experts warn that no country can protect all of its possible civilian targets. [18]

4-     Searching for technological solutions, like manufacturing vehicles with artificial intelligence in them so that they will refuse to crash and proceed when there is a human being in front of them. It is expected that this kind of technology would be widely available in the next decade. [19] However, it should not be ignored that this will take a long time to be universally applied, as well as, it will be a costly measure.

It is worth mentioning that the aforementioned measures are mainly directed to decrease the impact of the unsophisticated terrorist attacks, not to prevent its occurrence, as there are no measures could be taken that protect civilians completely.

Finally, ISIS affiliated lone wolves, and autonomous cells will continue to carry on attacks in Europe, and this raise the question about whether ISIS is involved in the operational planning of these attacks or it merely inspires the attackers through social media. Moreover, such attacks confirm that Europe faces a real challenge represented in the formation of radicalized incubator that needs societal policies, in addition to security measures to better face the rising threat.

[4]) Pamela Engel, ISIS and Al Qaeda have specifically called for the type of attack that just happened in London, Business Insider, March 22, 2017, accessible at: https://goo.gl/th4LCz

[8]) Rob Stein, The Technical Perspective: Ingredients for a Bomb Are Not Hard to Find, Washington post, August 11, 2oo6, accessible at: https://goo.gl/9GLUhL

[9]) How and why vehicle ramming became the attack of choice for terrorists, The Conversation, March 29, 2017, accessible at: https://goo.gl/OO0uQG