Why Did the Iran-backed Hashd al-Shaabi Reach the Iraqi-Syrian Border? 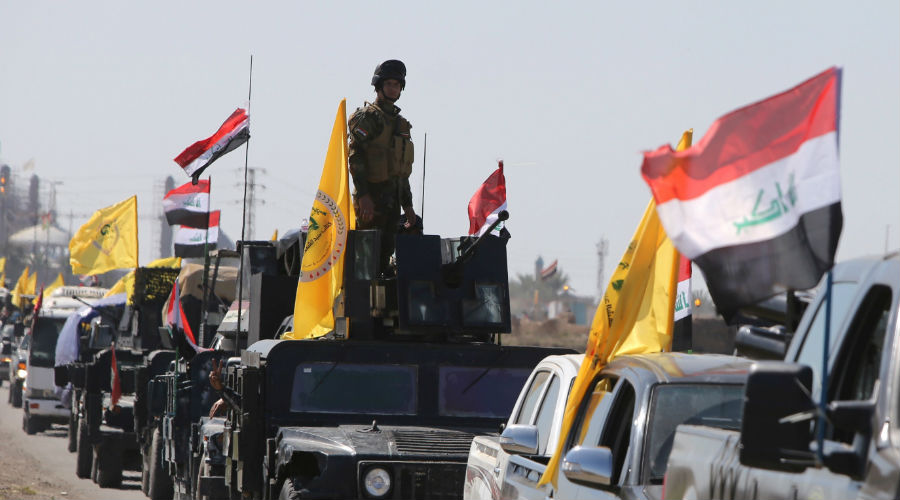 The ability of the Iran-allied Popular Mobilization Forces, better known as the Hashd al-Shaabi, to reach Iraq’s border with Syria and seize control of several areas, has raised questions about the timing and goals of this development. This development, according to several views, cannot be dissociated from Iran’s attempts to establish a land corridor to the Mediterranean via Syria to deal with political and field developments of the Syrian crisis. That is because Iran is concerned about potential negative consequences on its interests in Syria.

The recent advance of the predominantly-Shiite Hashd al-Shaabi group, and their attempts to secure control over Iraq’s border with Syria, are linked to the fact that the battle for Deir ez-Zour, currently one of the major battles in Syria, is nearing a settlement. This is especially so because crucial consequences will hinge on the potential trajectories of the crisis which, apparently, is going through significant strategic shifts, particularly after the U.S. became more involved in the crisis. This shift followed a remarkable change in Washington’s policy towards Syria after the US Administration of President Donald Trump assumed office on January 20, 2017.

It can be said that the Hashd al-Shaabi seeks to achieve the following two primary goals through reaching Iraq’s border with Syria:

1- Contributing towards establishing an Iranian corridor. The Hashd al-Shaabi’s control of the Iraqi-Syrian border represents a significant step due to the group’s strong ties to Iran, which seeks to secure sustained supplies to the Assad regime and other allied militias in both Syria and Lebanon.

Several reports indicate that Iran and its Hashd al-Shaabi militia both seek to take advantage of the war on ISIS to achieve this goal through sending across the message that they are parties to this war. This bid is not consistent with the fact that the violations perpetrated by the Hashd al-Shaabi with support from Iran were a major cause of the spread of ISIS in northern Iraq.

2- Maintaining Links with the Assad Regime. The Hashd al-Shaabi’s control of the Iraqi-Syrian border perhaps increases the possibility that the Assad regime’s forces will advance towards a meeting point, as part of ongoing co-ordination which Iran seeks to expand in the coming period.

The most recent move made by the Hashd al-Shaabi will apparently impose two trajectories in the coming period.

In the first scenario, a direct confrontation would break out between the Iranian-allied militia and the US-led Global Coalition to Counter ISIS due to Iran’s incessant efforts to exploit the Iraqi-Syrian border to maintain and sustain its support for the Assad regime in Syria.

Undoubtedly, what does increase the possibility of a direct confrontation is that the United States is determined to prevent Iranian-allied militias from approaching its military bases, specifically the al-Tanf air base near al-Tanf border crossing with Iraq, in southern Syria. This determination was evidenced in the May 18, 2017 US airstrike against a military convoy of Iranian-allied and pro-Assad regime militants, while it was advancing towards the al-Tanf border crossing. The Pentagon said that the massing of hundreds of pro-regime forces outside of al-Tanf was described as dangerous and a “direct threat” to the Global Coalition forces fighting ISIS.

In the second scenario, the Hashd al-Shaabi would surrender control of the Iraq-Syrian border and opt for coordination with the Iraqi government forces. Such a move would be driven by several reasons the most prominent of which is that it is difficult for the pro-Iranian militia to advance towards new areas around of Baaj area, a key town of Baaj in north-west Iraq, a known hideout of extremist organizations. Another reason is warnings from the US-led Global Coalition that has gained more significance and momentum after Washington’s recent airstrike against the pro-Iranian militia’s military convoy near al-Tanf.

That is why there are views that the open desert terrain of those areas will make the Hashd al-Shaabi exposed to the Global Coalition air-force thus increasing the possibility of being targeted by more airstrikes similar to the one at al-Tanf.

Moreover, the US-backed Kurdish militias and the SDF in particular emphasized that they will move to prevent any troops from penetrating their positions in Sinjar in northern Iraq, and that they are prepared to counter any advances by the Hashd al-Shaabi. This will create more obstacles for Iranian-allied militia’s attempts to advance to new areas. Within this context, Talal Silo, the spokesman for the Kurdish SDF, said that if the Hashd troops attempt to enter Syrian territory, the SDF forces will fight them.

The continuous advance of the Iranian-backed militias does increase the fears of parties involved in the Syrian crisis that more human rights violations will occur along with attempts to bring about demographic change, as was the case recently in some areas in Iraq and Syria.

In conclusion, it can possibly be said that the limits of movement for the Hashd al-Shaabi in the coming period will hinge on positions taken by Washington, which clearly rejected any bids by this militia to expand its influence into Syria, and even took measures to send across direct messages of warning as part of its new policy that revolves around Iran’s role in supporting terrorism and destabilizing the Middle East.