Why Are the Kurdish SDF Escalating against Iranian-Allied al-Hashd al-Shaabi? 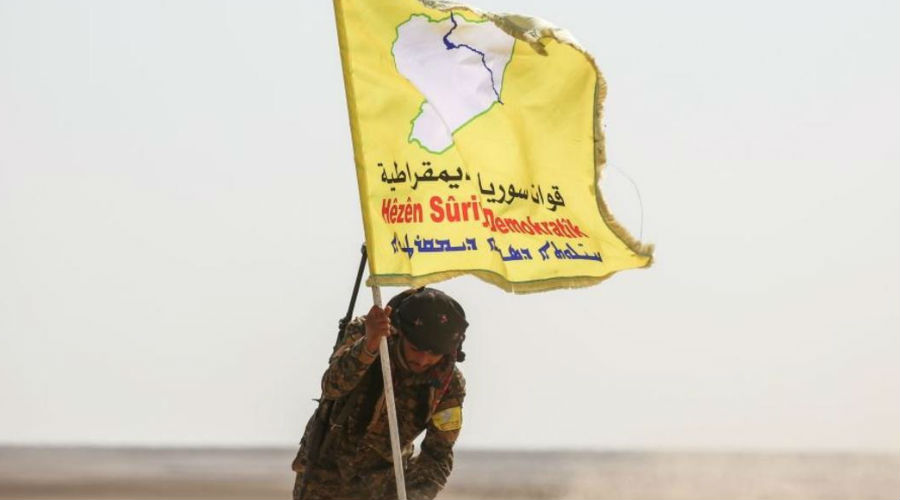 Parties involved in the Syrian conflict and the war on ISIS are making early preparations for the aftermath of the battles for Mosul and Raqqa, a stage that might witness significant strategic shifts. The potential shifts will impose new repercussions not only for the existing balances of power between these parties, but also on the potential trajectories of the ongoing conflict between involved regional and international powers.

Within this context, the so-called Syrian Democratic Forces (SDF), dominated by the Kurdish People's Protection Units (YPG), on May 30, 2017 warned the predominantly Shiite Hashd al-Shaabi group not to cross the Iraqi border with Syria into their own areas of control in al-Hasakah in north-eastern Syria. The warnings came after commanders from the Hashd al-Shaabi hinted their intention to advance to chase ISIS elements.

No doubt, this escalation cannot be dissociated from other variables. The most prominent of which are constant pressures put by Turkey to prevent any upgrading the weaponry of the Kurdish militias operating in Syria on the ground. Such move imposes serious threats to the Turkish security and interests.

Another variable is the ongoing escalation between the US Administration of President Donald Trump and Iran, where the strain expanded from the scope of the nuclear deal to include other issues such as accusing Iran of sponsoring and supporting terrorism and destabilizing the Middle East.

When commanders from the Hashd al-Shaabi militia announced that their forces reached the Syrian border, after taking some Yazidi-populated villages, the Kurdish SDF threatened that they will block any advances by the Iraqi militias into Syrian territory. Within this context, Talal Silo, the spokesman for the Kurdish SDF said that “if al-Hashd forces attempt to enter our areas, our forces will fight them.” Other Kurdish leaders associated al-Hashd's movements and goals with what Iran seeks to achieve in the region.

It is perhaps safe to say that the SDF seeks to achieve several goals through their warnings and criticism. The following goals stand out:

1- Creating a firewall. The fact that the SDF were quick to issue such warnings to the Kurds is correlated to the consequences of the May 18, 2017 US airstrike against a military convoy of Iranian-allied and pro-Assad regime militants, while it was advancing towards the al-Tanf border crossing with Iraq. Several views consider the strike as a message to Iran and its allies that their efforts to establish a corridor into the Syrian territory to continue their support to Assad’s regime will face insurmountable obstacles. This would likely push Iran to try to test the possibility of establishing such corridor through territory held by Kurdish militias. That is why the Kurdish militias promptly affirmed that they would not allow such attempts after the battles for Mosul and Raqqa ends. That is, they sent across this message to Iran and the Assad regime in particular.

2- Containing escalation. The Kurdish militias appear to have recognized that disagreements between Iran and the United States are not limited to the nuclear deal, which the Trump Administration is incessantly criticizing and currently reviewing to assess whether pulling out of it is in the national interest of the United States, and evaluating the extent of Iran’s compliance to it. However, these disagreements now include Iran’s state sponsorship of terrorism, and its role in destabilizing the region through its allied militias operating in conflict-hit countries.

In light of the above, the Kurdish militias sent across several messages, including that they are involved in countering any Iranian attempts to expand into Kurdish-held territories to create a corridor to back the Assad regime. These messages come in the light of US support to the Kurds.

Within this context, Rezan Gilo, a commander of the Defence Authority of Rojava, a de facto Kurdish autonomous region in northern Syria, asserted, on May 30, 2017 that the Iranians and Hashd al-Shaabi militias are approaching the Iraqi-Syrian border to carry out their old plans of establishing the so-called Shia crescent. Gilo further noted that their attempts to seize control of the border areas poses threats to areas under the control of the Kurdish autonomous region.

One can also state that these parties take into consideration the notable coordination between Iran and Turkey regarding the Kurdish issue. The two states seek to prevent the Kurds from making strategic gains from the various regional conflicts. Their bid is driven by their concern over potential domestic and regional repercussions of such gains.

3- Containing pressures. Through such warnings, the Kurdish parties are perhaps seeking to give special significance to their role, whether in the war on ISIS or after the fall of ISIS’ main stronghold, Raqqa. Through this bid, they aim to contain potential implications of Turkey’s efforts to deal with the United States’ plan to directly send new shipments of arms to the Kurdish YPG militants in the lead-up to the assault on Raqqa.

Ankara strongly criticized Washington’s announcement that it will provide small arms and vehicles to the Kurdish militias. Ankara argues that the move will pose several threats to Turkey. The most significant of such threats, in Ankara’s view, is that these arms would turn up in the hands of the Kurdistan Workers’ party (PKK) fighters.

Hence, the Kurdish militias are perhaps seeking to adopt these new stances attempting to reduce potential pressures that can be imposed by the recent Turkish movements. To achieve this goal, they are affirming that they have transformed into a key party with a bigger role than just participating in the war on ISIS. In their view, their bigger role includes prevention of Iranian attempts and allied militias to establish that corridor through Syria to sustain Iranian backing for the Assad regime in the coming period. This expanded role, in their view, would help receive increased support from the US.

In light of the above, it can possibly be said that the coming period is likely to witness escalation between Syria’s Kurds, as one party, and Iran and its allies in both Iraq and Syria, as another party. This escalation comes in light of preparations that the parties currently involved in the developments of the Syrian conflict are adopting to deal with the potential consequences of the battle for Raqqa.