The Demise of the Turkish Democratic Model 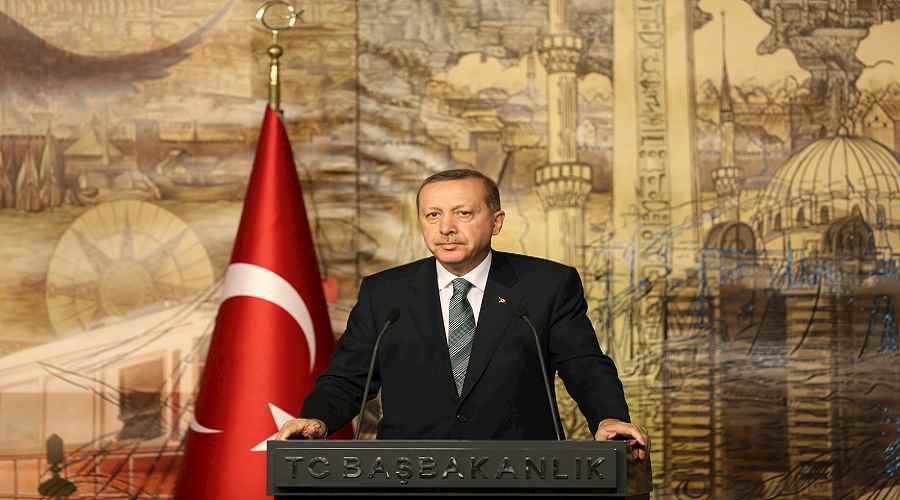 One of the recurrent questions constantly raised by the west: Whether Islam is compatible with democracy? It is attributed to the assumption that many Islamic political parties do not believe in democracy, except as a tool to reach power. Turkey’s Justice and Development Party (AKP) seemed to challenge this assumption with its ascendance to power in 2002.

AKP party drew admiration due to its initial policies aiming to reinforce democratic rule, along with implementing successful economic reforms that resulted in an average annual rate of growth of real GNP equal to 7.8 percent over 2002 – 2006.[i] AKP presented a model of an Islamic party that embraces liberal ideology. Many western think tanks, as well as, the former US Secretary of State Hillary Clinton praised Turkey as a model that could inspire Arab countries in the post Arab spring era.[ii]

However, Recep Tayyip Erdogan, the former Prime Minster of Turkey and its current President has become more authoritarian over the course of time. This was evident in the way he dealt with his political opponents inside Turkey. This article will shed light on how Erdogan’s policies influenced negatively the Turkish democratic model rather than consolidating it, through the following tactics:

First: Tightening his Grip over Power

Erdogan and Abdullah Gül played a prominent role in the creation of the Justice and Development Party (AKP), and Gül was the first AKP Prime Minister in 2002, as Erdogan was barred from seeking political office after a prison sentence in 1999, “on the grounds of threatening the Kemalist nature of Turkey, especially secularity”.[iii] Later, Gül resigned from the premiership after the AKP government changed the law making way to Erdogan to be the Prime Minister by election in the spring of 2003, while Gul became the Foreign Minister. In 2007, Gül resigned from the government to become president, while concurrently Erdoğan began to consolidate his current control over the AKP. Ahead of the 2011 elections, Erdogan further purged Gül supporters from the AKP parliamentary ranks ahead. [iv]

The scenario was repeated with Ahmet Davutoğlu, who replaced Erdogan as Prime Minister in August 2014 as the latter become the president. Tensions have simmered between them leading to Davutoğlu’s resignation after 20 months in office in which he tried to resolve their conflict. One of the main causes of the rift was Davutoğlu’s attempts to act independently and his disagreements with Erdogan over a number of policies, including Erdogan's plans to change the country from a parliamentary system to a presidential one. [v] That is why Erdogan replaced him with Binali Yildirim.

Even before Yildirim’s reign as a Prime Minister, President Erdogan dominated the executive branch, despite the fact that the position of the president is largely symbolical. It would not be an exaggeration to argue that Erdogan has been the defacto ruler of Turkey since his rise to power in 2003. After the April 2017 constitutional referendum, he has the right to contest the next presidential elections, in which he will enjoy full executive powers. [vi]

Since his ascendance to power, Erdogan mounted his attack on the Turkish deep state, referring to a presumed clandestine network of military officers, and their civilian allies who, for decades, suppressed anyone thought to pose a threat to the secular order, established in 1923 by Atatürk. Erdogan always expressed his concern that the deep state would prevent him from governing effectively. [vii] Yet in fact, Erdogan was able to rise to power thanks to his alliance with the Gülen movement. The movement, which has successfully penetrated state institutions, especially the police, and judiciary. [viii] However, the rift between Gülen and Erdogan erupted towards the end of 2013, forcing Erdogan to designate the group as a terrorist organization, and make it responsible for the July 2016 Coup d’état.

The failed coup d’état represented an opportunity for Erdogan to expand his power over the Turkish state and oust the Gülen movement from governmental institutions, as well as, any other opposition forces. The purge extended to state universities, the police, the judiciary, government bureaucracy, and the military, to mention but a few. About 149 media outlets were shut down[ix], and 231 journalists were arrested. Now, Erdogan can reinforce his own deep state that he has already built through depending on National Intelligence Agency (MIT), Islamists and ultranationalists.[x]

Third: Utilization of the Judiciary

One prominent example of how Erdogan utilized the Judiciary to consolidate his power is what is known as the July 28, 2008 “Ergenekon trials”. “The original indictment described an elaborate plot ultimately connecting 531 military officers, mafiosi, ultranationalists, lawyers and academic figures who supposedly planned violent campaigns to destabilize Erdogan's AKP and seize power.”[xi] On August 5, 2013, Istanbul's High Criminal Court sentenced 275 of the accused, including the former chief of the General Staff, General Ilker Basbug, to life long prison terms.

However, Erdogan in alliance with his then-Gulenist allies, who had infiltrated the police and judiciary, utilized the case in order to weaken his opponents at that time, namely the military and Kemalist opponents.[xii] That was evident when, on April 21, 2016, the High Court of Appeals overturned the convictions because of procedural flaws and the case's lack of merit. The court said there was a prolonged trial process with unlawful searches of offices and homes, and fabricated evidence.[xiii] Despite the deteriorated relations between Erdogan and Gulen since December 2013, this case reveals how the judiciary was utilized as a tool in Erdogan’s Power struggles.

Erdogan has been frequently accused of turning a blind eye to ISIS in northern Syria as Turkey has become the main transit route for foreign fighters to enter and exit Syria since 2011. On the other hand, “an unknown number of wounded fighters of the Islamic State in Libya have been transported out of the country to an Istanbul hospital to undergo medical treatment” in December 2015, according to Italian intelligence.[xiv] Ankara started taking an active role in countering the group only after the first planned attacks by ISIS on Turkish soil took place in July 2015. It also allowed US forces to operate against ISIS out of Incirlik Air Base, as well as bases in Ditarbakir and Malatya.[xv]

Erdogan was able to earn an admirable reputation for honesty and efficiency as the mayor of Istanbul during the mid-1990s. However, this picture changed dramatically with the corruption probe of December 2013 that involved top AKP officials, “the charges included bribery, corruption, fraud, money laundering, and gold smuggling.”[xvi] Businessman Reza Zarrab, one of the officials accused, was reportedly involved in a money-laundering scheme to bypass US sanctions on Iran. All of the 52 people detained were connected in various ways with the AKP, and several family members of cabinet ministers.

The son of Recep Tayyip Erdogan was also subjected to investigation, by the release on YouTube of audio recordings in which Erdogan was reportedly heard telling his son, Bilal, to urgently get rid of tens of millions of dollars. Erdogan has claimed the recordings were a montage but experts disagreed. [xvii]

Widespread public outrage forced four cabinet ministers to resign. Meanwhile, the AKP majority in the Parliament dropped most of the corruption charges, without even setting trials. [xviii] The corruption scandal has influenced the popularity of the AKP party, which was reflected in failing to secure an overall majority in Parliamentary election in June 2015 for the first time, since AKP ascendance to power in 2002. It further resulted in escalating enmity between Erdogan and Gulen, whom he held responsible for revealing the corruption scandal.

The Turkish government has constantly accused Arab governments during the Arab Spring of repressing peaceful protests. Yet, Erdogan and his government did not pursue a different course, when they had to deal with their own protesters, as evident in how the Turkish authorities dealt with the Gezi Park protests that erupted on May 28, 2013. Protesters opposed the replacement of Taksim Gezi Park for reconstructing the historic Taksim Military Barracks. Later, it turned into mass rallies against Erdogan after a heavy-handed police response, which resulted in killing a number of protesters, as well as injuring thousands.[xix]

Public officials have variously referred to the protestors as hooligans and claimed that terrorist groups were behind the protests, in order to justify the levels of violence used by the police to disperse them. [xx]

Finally, it could be argued that Erdogan’s efforts to consolidate power were gradual. At first, he utilized Turkeys’ desire to access EU membership as a deterrent against the army not to instigate a coup against AKP government. In addition, during this initial phase, he utilized his relations with Gulen’s deep state in order to back AKP’s government. Secondly, after the rift with Gulen, Erdogan tried to weaken the grip of his opponents over state institutions, without much success. He even tried to consolidate his relations with the Army. Thirdly, the failed 2016 coup was utilized in order to purge the Gulen movement from state institutions, as well as any political opponents deemed threatening to Erdogan’s power. Lastly, the refugee crisis in Europe represented the perfect opportunity for Erdogan to ensure that EU turns a blind eye to his increasing authoritarian tendencies. Thus, Erdogan’s rule of Turkey, which extends to August 2019 is paving the way to the end of the once praised Turkish model, and turning the country into an autocratic one. [xxi]

[i]) A. Erinç Yeldan and Burcu Ünüvar, An Assessment of the Turkish Economy in the AKP Era, Research and Policy on Turkey, 2015, (p. 2), accessible at: http://yoksis.bilkent.edu.tr/pdf/files/12116.pdf

[viii]) Sarah El-Kazaz, The AKP and the Gülen: The End of a Historic Alliance, Crown Center for Middle East Studies, no. 94, July 2015, accessible at: https://www.brandeis.edu/crown/publications/meb/MEB94.pdf

[xii]) Michael Gunter, Erdoğan and the Decline of Turkey

[xvi] Berivan Orucoglu, Why Turkey’s Mother of All Corruption Scandals Refuses to Go Away, Foreign Policy, January 6, 2015, accessible at: http://foreignpolicy.com/2015/01/06/why-turkeys-mother-of-all-corruption-scandals-refuses-to-go-away/