Can the "De-escalation Zones" Agreement Hold in Syria? 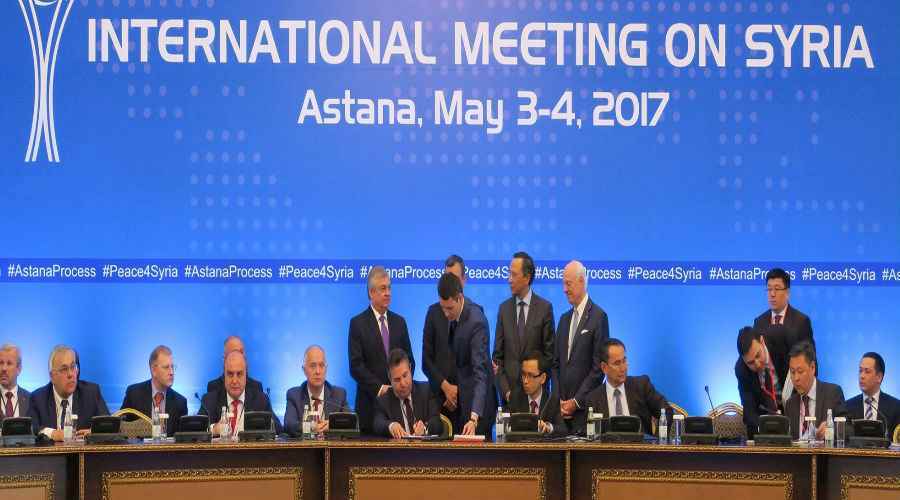 The agreement reached between Russia, Turkey and Iran on May 4, 2017, to create de-escalation zones, or safe zones, is currently facing multiple challenges, regarding, in particular, recurrent violations that can make its viability in the coming period questionable. However, this does not negate the fact that there are views that the agreement can be a prelude to more initiatives that can help support efforts in reaching a solution to the Syrian crisis.

What should be noted within this context is that the idea of creating safe zones is not something new. In January 2017, a team within the current US Administration had proposed it as an essential pillar of a plan requested by President Donald Trump to address the developments of the conflict in Syria.

Although Russia rejected similar proposals from the former Administration of President Barack Obama in the past, it often changed its position and decided to use the fourth round of peace talks on Syria, dubbed Astana 4, to draw up a plan to create such zones.

Undoubtedly, this cannot be dissociated from recent developments in Syria. The most important of these developments has been the US. missile strike against the Syrian regime’s Shayrat airbase on April 7, 2017. This move revealed that the US Administration wanted to escalate its involvement in the Syrian conflict, which pushed Russia to accept the creation of the de-escalation zones as an alternative to deploying defense systems that, according to several views, cannot deter the United States’ intervention. In other word, Moscow only sought to increase and expand available options after Washington missile strike.

Nonetheless, amidst the many problems revolving around guarantees as well as the positions of the involved parties, it can be said that the de-escalation zones agreement is facing no easy tests.

Pillars of the Plan

The details of the the said agreement - regarding in particular the mechanisms of implementation of de-escalation zones- are yet to unfold. However, the revealed outlines of the of the agreement show four zones in northern, central and southern Syria. In his statements delivered at a press conference following the conclusion of the agreement, Turkish President Recep Tayyib Erdogan, noted that the agreed de-escalation zones include parts of Idlib province in the north, the northern parts of Homs and Hama provinces in central Syria, the Eastern Ghouta outside the capital Damascus, and certain parts in the provinces of Daraa and Quneitra province in the south. The four zones were subjected to forced systematic geopolitical and demographic change sponsored by both Russia and Iran, before the US missile strike on the Shayrat airbase.

According to statements delivered by the Syrian Regime’s Foreign Minister Walid al-Moualem on May 8, 2017 military police, and not United Nations or other international forces, would be responsible for enforcing the de-escalation agreement on the ground.

The agreement is seen as a prelude for the return of forcibly displaced Syrians to their homes and a boost for any ceasefire initiatives that excludes fighting terrorist organizations.  Moreover, the agreement is supposed to be based on the wrong assumption that previous ceasefire agreements were fruitful.  Nevertheless, the agreement will be an interim one where its extension hinges on the extent of compliance of the involved parties.

Russia’s decision to support this agreement can be explained by its recognition that it would be too difficult for it to deploy additional defense systems on Syrian territory. Even if defenses in strategically important zones in Syria, such as Lattakia and the nearby Hmeimim airbase, are reinforced, Moscow is unlikely to escalate its existing disagreements with Washington following the US military strike on the Shayrat airbase.

What stands out in this context is that Moscow had prepared the memorandum of the agreement and even was keen on enforcing a May 8, 2017 agreement on the Barza neighborhood - the first deal of its kind involving the evacuation of opposition forces from Damascus to Idlib- only three days after the Astana agreement was reached. It is likely that the plan was prepared in advance by the involved parties. Although US Secretary of State Rex Tillerson welcomed the agreement in principle, he generally adopted a cautious position on it saying “the devil is always in the details”.

The fact that these arrangements were revealed while the first round of Astana talks were held, cannot be ignored. These arrangements also coincided with a meeting between the US Secretary of State and Russian Foreign Minister, which was preceded by a meeting between Russian Deputy Foreign Minister Sergei Ryabkov and US Under Secretary of State for Political Affairs Thomas Shannon.

Despite all this, there are potential challenges that can possibly face the de-escalation agreement. The following challenges stand out:

1- Specific or extensive interpretations of the agreement. This means that every involved party will return to treat the agreement according to its own political calculations. This was evidenced by different reactions to, and positions on the agreement, and more specifically the item that has to do with de-escalating violence while continuing confrontations with terrorist organizations. This can explain why a consensus was reached between the guarantors, who are the parties to the agreement, i.e. Russia, Turkey and Iran, about the need for drawing maps for de-escalation zones as well as maps for separating the armed opposition from ISIS and al-Nusra Front by June 4, 2017.

This also reveals a significant indicator, which is represented by the statements of the Syrian regime’s Foreign Minister Walid al-Mualem in which he said that the Syrian Democratic Forces (SDF) are involved in a legitimate confrontation with ISIS. This implies several indications that the regime would cooperate with the Kurdish militia in the coming period and even negotiate on positions retaken from ISIS in Raqqa and surrounding areas.

At the same time, there are several views that Iran, Hezbollah and other militias seek to impose a tactical situation on the ground in areas involved in the de-escalation agreement to counter the opposition forces, based on the fact that the majority of these areas were included in agreements providing for evacuating opposition elements.

2- Deployment Map of organizations not included in the de-escalation agreement. These include al-Nusra Front and others. The map is constantly changing, due in particular to ongoing conflict between these organizations. A good instance of this was the infighting that erupted between Tahrir al-Sham (al-Nusra Front), Faylaq al-Rahman and Jaish al-Islam, which cast doubts on the possible compliance to the agreement.

Needless to say, the positions of the Syrian political forces will influence the implementation of the de-escalation agreement. It was noteworthy that Turkey approved the agreement which was rejected by these forces expressing reservations about the role of Iran and the looseness of the agreement itself. These forces expressed concern that an agreement that does not cover all Syrian territory would lead to its division into areas of influence. However, this does not negate the fact that the military wings of these political forces are, almost, dealing with the agreement on the ground, due, perhaps, to their desire to test its feasibility.

3- Final arrangements of the agreement. It is not possible to perceive that the final agreement will be implemented as indicated in the memorandum on the agreement. This would, essentially, hinge on the outcome of any the US-Russia understandings. Therefore, it is unlikely that the agreement would be changed by a new round of talks in Astana or negotiations slated on May 16 in Geneva.

In conclusion, the de-escalation zones agreement remains an introduction to a political framework that aims to balance variables of forces on the ground in Syria after the US intervention became “fait accompli”. it may also be a preliminary step in addressing the future political map after interim alliances take their final shape in Syria. That is because it represents a prelude to a transitory phase in the conflict and not the essence of the phase itself, due in particular to the fact that it will remain an interim agreement until strategic commitments, that are more capable of imposing major changes on the trajectory of the conflict, take their final shape.