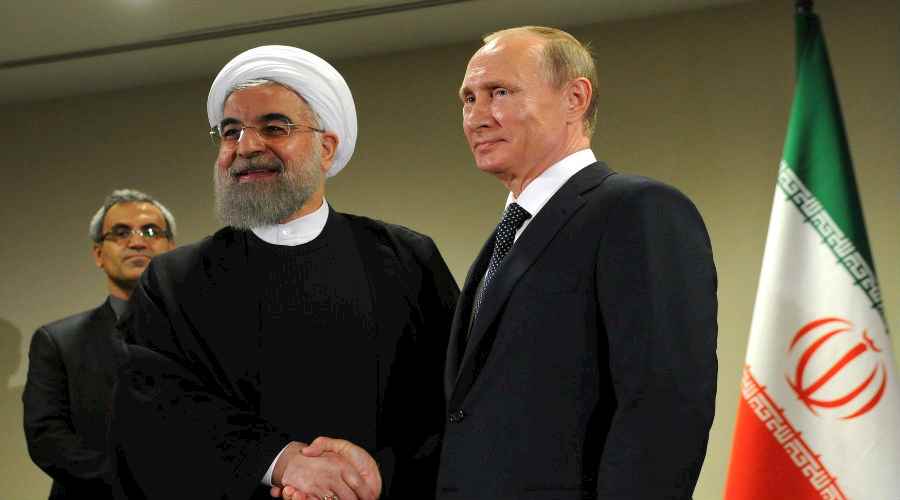 Iran is making fresh attempts to upgrade its co-operation with Russia, especially after differences between Tehran and Moscow escalated over addressing developments on the ground and at the political level in Syria. Their differences evidently widened in the aftermath of the battle for Aleppo in mid-December 2016, in particular because Iran exaggerated its contribution to the various armed confrontations and the gains it expected to make from the conflict in Syria as it transitions into political settlement. Moreover, Russia has always been keen to stress that its Syrian intervention brought about changes to the balance of power and strengthened the positions of the Syrian regime and its allies in the recent round of peace talks held in Astana and Geneva.

Within this context, Iran made new offers to Russia during President Hassan Rouhani’s visit to Moscow on March 27, 2017. Iranian Foreign Minister Mohammad Javad Zarif announced that Moscow could use Iranian military bases to launch air strikes against militants in Syria on a "case by case basis”. Nonetheless, Moscow became less interested in the Iranian military bases because of a decline in field military operations inside Syria and also because Moscow is focused on establishing a ceasefire and continuing negotiations between the regime and opposition forces.

However, these Iranian efforts may possibly face several hurdles in the coming period due to various factors the most important of which is that Russia deliberately sent across several messages to Iran in the stage following the battle for Aleppo and the conclusion of a ceasefire agreement. The first of these Russian messages was conveyed through the deployment of a Russian military police battalion in Aleppo in December 2016. Through the deployment, which marked the start of a new Russian role inside Syria, Russia wanted to emphasize its transformation into a main guarantor of the security arrangements that were formulated by the time a ceasefire agreement was agreed. According to its commander Ruslan Hajiyev, the battalion undertake responsibility for public security, training as well as some humanitarian operations. It has also oversaw the evacuation of Al-Waer neighborhood in Homs city and the rehabilitation of Syrian military police personnel on securing and policing involved areas, limited engagement and policing parties to the conflict, which are the traditional missions of military police.

The deployment drew criticism from Iranian field commanders involved in the military confrontations inside Syria. They believe that the deployment aims to curtail the influence and role of Iranian-allied militias that are already involved in undertaking some of these missions. On the other hand, the deployment supports Russia’s efforts to bolster its own influence in the country following a letup in its airstrikes that established Russia’s military and political role in the Syrian conflict since the start of its intervention in September 2015.

What should be noted also is that the personnel of the Russian battalion are followers of several faiths making the formation trans-sectarian. This was in itself a message for Iran that Russia is against any efforts to enforce changes to the sectarian balance inside districts where armed confrontations are brought to an end, to preempt the resurgence of any religiously-motivated conflicts.

Moreover, because Russia did not coordinate with Iran before it deployed the military police battalion, Iran had growing fears that Moscow would gradually downgrade its understandings with Tehran in favor of better coordination with Turkey, which was evidenced in the recent negotiations between the regime and the opposition in Astana and Geneva.

In light of the above, Iran was keen to use Rouhani’s visit to Moscow to add momentum to its strong relations with Russia, both at the political and economic levels. Success of the bid was reflected in the signing of 14 agreements between the two countries, as well as in statements made by Iranian officials to stress that the visit will help underpin what they called an “alliance” with Russia and advance the level of coordination on issues of mutual interest and concern, most importantly the Syrian crisis.

However, what stands out in this context is that this bid by Iran does not only aim to ease the contrasting positions that surfaced recently over field and political developments in Syria, but also to maintain relations with Russia due to current  pressures from regional and international powers. That is, tensions with Turkey escalated over disagreements on Syria, especially after Turkish officials criticized Iran’s policy towards the region. Moreover, Iran’s disagreement with the US administration of President Donald Trump is widening and has already involved several regional issues, such as the Iranian presence in Iraq and Syria, alongside the issue of Tehran’s controversial nuclear program and the accusations that Iran supports terrorism.

In other words, Iran sees Russia as an international patron that can help it in addressing pressures from international powers, whether because the nuclear agreement that came under unprecedented criticism from the Trump administration, or because of Iran’s role in destabilizing the Middle East.

However, this would not negate the fact that Russia as an international power has its own calculations for its own relations with Turkey and the United States, which suggests that efforts being made by Iran to upgrade coordination with Russia over the Syrian crisis do face serious obstacles. That is, Moscow seeks to upgrade coordination with Ankara at the economic and political levels, which was reflected in Turkish President Recep Tayyip Erdogan’s recent visit to Moscow on March 10, 2017.

During the visit, Russian President Vladimir Putin stressed that Moscow and Ankara established good military and security relations. President Erdogan spoke about the importance of economic cooperation, particularly in the defense and energy industries and demanded Russia lift economic sanctions imposed on Turkey in the aftermath of Turkey’s downing of a Russian warplane in November 2015.

Moreover, Russia is seeking to broaden the scope of understandings with the US administration while curtailing potential disagreements and neutralizing any potential impact of accusations by some parties in the US that Russia interfered in the November 2016 US presidential elections. Hence, Moscow perhaps is seeking to avoid getting involved in disagreements with Washington because of Iran.

In light of the above, it is possibly safe to say that Rouhani’s visit to Moscow may impose significant implications for the economic relations between the countries, especially because Iran is seeking to increase trade with Russia. Nevertheless, Iran’s bid may not reduce differences with Russia over developments on the ground and at the political level in Syria due to the fact that it is difficult for Russia to bring about major changes to its position, particularly concerning its continuous understanding with Turkey and the expansion of its influence on the ground inside Syria.