Why Iran is boosting relations with Asian powers 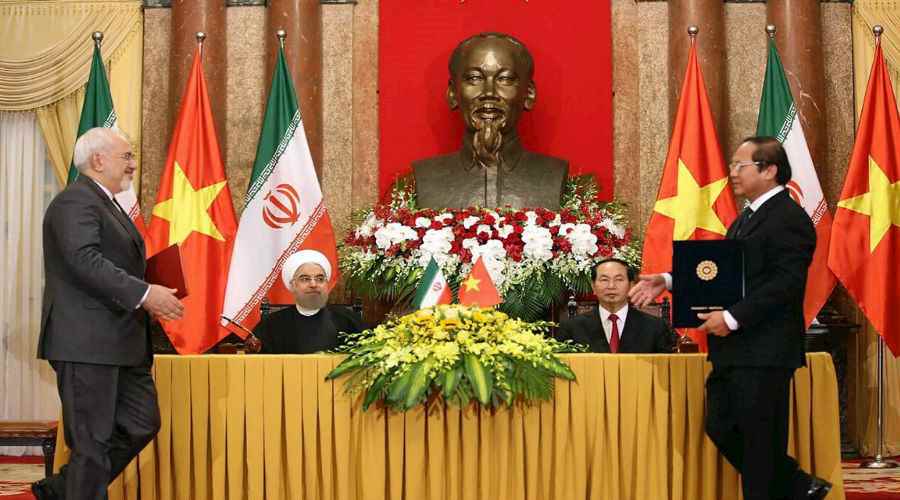 It appears that Iran has started to prepare for possible escalation with the United States once Donald Trump is sworn in on Jan. 20th, 2017. Tehran wants to make clear that if Washington, under the new administration, obstructs the implementation of the nuclear deal difficult challenges will arise. Iranian officials have hinted at a return to developing its nuclear program by raising the level of uranium enrichment, increasing the number of centrifuges and refusing to concede to the restrictions placed by other world powers. Iran will not distinguish between those who were involved with 5+1 talks that concluded in the nuclear deal on 14 July, 2015, such as China, Russia, Germany, France and Britain; or those that quickly took advantage of lifting their sanctions on Iran in order to resume trade, such as India, Japan and South Korea.

Despite concerns in many Iranian political circles about possible changes to U.S. policy under Trump, Tehran feels it can still put pressure on Washington under the new administration to prevent hindering the nuclear deal. Iran plans to stress that the deal was not a bilateral agreement between Iran and the U.S., but an international agreement between Iran and a group of global powers in the hopes of safeguarding the Middle East (already a focal point for them for security and economic reasons) against the eruption of another war. The deal also boosts opportunities to increase trade with Iran, which is currently seeking to return to the global economy after being isolated by international sanctions due to its nuclear program. This means that these global powers will object to any possible U.S. attempts to obstruct the deal, and will contribute to buffering any pressure on Iran caused by anticipated U.S. policies.

This explains Iran’s focus on advancing relations with several Asian powers, as highlighted during an Asian tour by Iranian Foreign Minister Mohamed Jawad Zarif in early December 2016. Members of the tour included representatives from China, India and Japan. On the tour, Zarif made noteworthy statements about the possibility that Iran may suspend the nuclear deal if the incumbent U.S. President Barack Obama approves sanctions that were recently renewed by the U.S. Congress.

It is significant that on the Asian tour Zarif was accompanied by 38 CEOs of prominent companies from the Iranian Chamber of Commerce, 15 IT companies, eight Iranian banks and several officials from the industrial, commercial and academic sectors. Accordingly, one can conclude that the tour aimed to achieve several economic goals, most notably to reach agreements with these countries for partnerships in projects to develop the Port of Chabahar, which will provide access to Central Asia, and reach regional markets.

Iran also wants to raise the level of banking transactions with these countries, especially since the lifting of sanctions helped settle its battle for delayed financial assets with some countries, such as India. In May 2016, the two sides agreed to use European banks to transfer late financial dues to Iran, estimated at $6.4 billion.

Iran had other goals for the tour as well, such as improved coordination on several regional issues, most notably the Syrian issue. Tehran is closely monitoring Beijing’s position on this conflict in particular, especially after China abstained from voting on a draft resolution by France on Oct. 8th,  2016, while Russia aborted the resolution using its veto power. Several in Iran viewed this as an indicator that Beijing may change its position on the Syrian crisis by inching closer to the viewpoint of the West and some regional states. Nonetheless, when China used its veto power to block a resolution co-sponsored by Egypt, Spain and New Zealand on Dec. 6th, 2016, the move reassured Tehran that, for now at least, China will not change its policy on Syria. This means it is still willing to continue giving international support to the Syrian regime and block any condemnations in the Security Council that may open up other options that contradict its interests in the region.

Many inside Iran believe the most recent move by Beijing may indicate it wants to maintain its role as a world power that can impact international dynamics, especially in the Syrian crisis – before Trump’s new administration takes over in January 2017.

Accordingly, Iran may, in the coming period, attempt global mobilization against any direction that Trump’s administration could adopt to obstruct the nuclear deal; for example by putting more banking transaction restrictions between Iran and the world. Iran believes that this international mobilization may be more appropriate, before it is forced to resort to more difficult options such as suspending the nuclear deal, and subsequently be the first to suffer the consequences.