Put to the Test

How does Iran approach the ongoing political stalemate in Iraq? 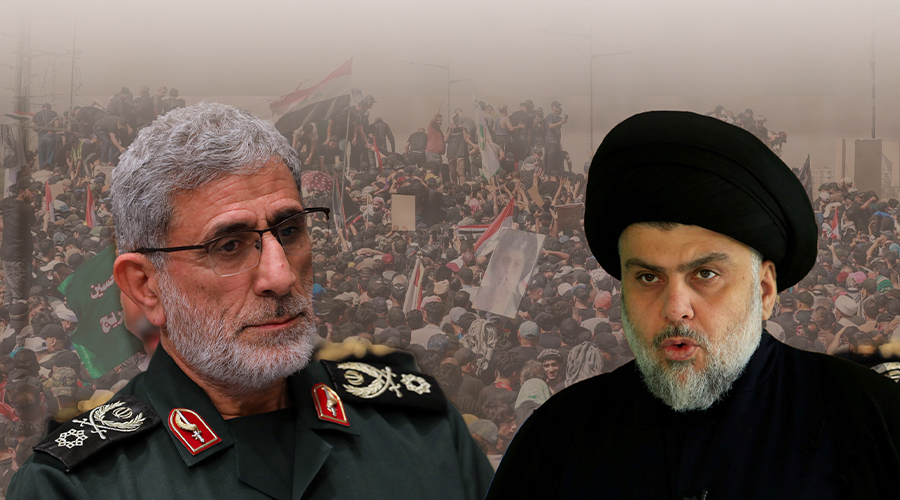 Iran’s influence in Iraq over the past years have been challenged. The Iraqi 2021 elections resulted in tilting the parliament’s balance towards the anti-Iran Sadrist Shi’ite block, at the expense of the pro-Iran Fateh alliance. As Iraq’s political scene has degenerated quickly since 2021, Iran finds its influence being put to the test.

Resulting from this shift is the weakening of pro-Iran conduits, whose diminishing role is compromising Iran’s presence in the war-torn country. Coupled with stifling economic sanctions, Iraq, once Tehran’s ‘gold mine’ and passage to Syria and Lebanon, is slipping away from Iran’s grip.

Iran’s official and non-official reactions to the developing situation in Iraq has been varied, and may be outlined in the following:

A. The Iranian President: Ebrahim Raisi in April, meeting with Speaker of the Council of Representatives of Iraq, Mohamed al-Halbousi, said that Tehran looks forward to the forming of the new government in Iraq. In a call with prime minister of Iraq late August, Mustafa Al-Kadhimi, President Raisi stressed that all Iraqi factions needed to work together to break the deadlock, which meant negotiating with Iran-backed allies, that is the Coordination Framework, a key faction in the current crisis.

B. Iranian Foreign Ministry: The Ministry’s official statement has conveyed a message of impartiality and non-intervention. Calling the ongoing crisis in Iraq an “internal matter which Iraqi parties are the only actors capable of breaking the impasse”, spokesman of the Foreign Ministry of Iran, Nasser Kanaani, said his country would not intervene in Iraq’s internal matters, and that he invites all factions to sit at the negotiating table to find a common ground on which a new pathway could be forged. In the wake of worsening confrontations between Sadrist and the Coordination Framework, Iran’s Ministry issued a statement of concern at the worrying developments, saying Iran would offer any support Iraqi factions forge a common ground and a way forward. And following the bloodshed events in Baghdad’s Green Zone, Iran foreign affairs ministry called on all parties to maintain self-restraint, dialogue, and upholding institutions and the law. Once Muqtada al-Sadr ordered his followers to withdraw from the parliament on August 30, Iran re-opened its border with Iraq and invited political factions to quickly form a new government.

The temporary Imam of Friday prayers, Mohammad Javad Haj Ali Akbari said on September 2 that Iran is keen for the establishment of a new and sustainable government in Iraq sooner rather than later, and that Tehran would not hesitate to offer any support or aid to Iraqis security, happiness, and prosperity. His message touched on the fact that the recent events in Iraq would have had a tragic consequence on Karbala’s Arba'een Pilgrimage, the religious ritual for the commemoration of martyrdom of the grandson of the Islamic prophet Muhammad and the third Shia Muslim Imam, Husayn ibn Ali.

Other statements were on the opposite spectrum to Iran’s official stance. Seyed Jalal Sadatian, former ambassador of Iran to the UK, expects Iraq to go the path of one of three possible scenarios: the assassination of al-Sadr, which would off-set the country into chaos; the resignation of current government; or clashes between the two camp that would lead to the crushing of either.

Iraq’s crisis has consumed Iran’s media, especially with recent development taking place in the Green Zone last August. Some media outlets have been dealing with events in Iraq with deep concern. Conservative platforms have described al-Sadr’s stance a ‘reversal of position’. Iran’s most conservative newspaper and whose editor-in-chief is officially a representative of the Supreme Leader, has blamed the US for Iraq’s ongoing crisis. Vatan Emrooz, another conservative paper associated with the Islamic Revolutionary Guard Corps has claimed that the Sadrist and Mustafa Al-Kadhimi parties are behind the failed attempts to establish a new government. Leaders of these two parties aligned on the incursions of parliament.

Other reformist papers, however, warned of foreign middling in Iraq, and of the serious complications Iran’s involvement may instigate.

Movements across the board

On the ground, Iran has taken steps to mitigate the possible consequences of Iraq’s ongoing crisis, which may be summarised as follows:

1. Visits by the leader of Quds Force:

Brigadier General Esmail Qaani has made nearly 10 trips to Iraq within a short span of time after the recent parliamentarian elections. While the official reason given for some of these trips were to visit sacred Shia shrines, the purpose of other visits remained covert. Yet, the main purpose of these visit remains two-fold: to persuade al-Sadr and his allies of letting go of the past; and to convince the Sunni camp to form a government that does not include the Coordination Framework. Qaani’s efforts, however, did not come with any results as al-Sadr refused to meet with him. The focus for Qaani shifted unifying the Iran-backed camp, and to de-escalate the tension between the two camps, which has weakened Iran’s influence in Iraq.

Reports, however, have revealed that Qaani had asked the Coordination Framework to replace their prime minister candidate, Mohammed Shia' Al Sudani, with someone who might be more appeasing to al-Sadr. Other reports have revealed Qaani may have played a role in stopping the events in the Green Zone from escalating, though he hasn’t been able to facilitate an agreement between contending factions, which puts his role as a successor to Qasem Soleimani to a difficult test.

Kurdish region Erbil, a stronghold of Kurdistan Workers’ Party (PKK), an ally to al-Sadr, was shelled by Iran in March 2022, soon after the forming of a new government failed. While the official reason given by Iran was to retaliate the killing of high officials by attacking US bases, they were a clear message and a tactic to pressure al-Sadr, and influence the forming of a new government, this time by force.

3. Changing the Iranian ambassador to Baghdad:

A new ambassador to Iraq was announced last April. Born in Najaf, and a leader in Quds Forces, Mohammed Asadegh replaces his predecessor Iraj Masjedi, who just couldn’t achieve what Tehran had aimed for in unifying the Shi’ite bloc.

The ambassador was quick to connect with two sides in Iraq: the first is with a host of politicians and leaders to facilitate a common ground; the second with international NGOs and representatives. On July 25, Ambassador Asadegh received Jeanine Hennis-Plasschaert, Special Representative of the Secretary-General for the United Nations Assistance Mission for Iraq, to discuss the ongoing crisis in Iraq, how it could be overcome, and the way forward.

As the crisis in Iraq worsens, Kazem al-Haeri, Sadrist religious Marja, resigned from his role and urged Sadrist loyalists to follow the Grand Ayatollah of Iran. Though he was appointed by al-Sadr’s late father, the decision by al-Haeri has been described as an attempt by Iran to keep its grip of influence over Sadrist loyalists.

It may be concluded that the ongoing crisis in Iraq poses serious challenges to Iran. It tests Iran’s ability to navigate highly complex scene when policy makers in Tehran had been used to direct influence in the war-torn country. Today, Iran finds itself in direct confrontation with historical allies. Also, Soleimani has left a role too big to be filled by Qaani, who hasn’t managed to deliver on Iran’s ambitions, at least for the time being. At the same time, Iran’s difficult nuclear negotiations with the West does not allow much room for manoeuvring if it wants the Western economic sanctions to be lifted. Yet, Iran cannot stand and watch the situation in Iraq deteriorates in Iraq and lose important allies without doing something about it, especially with large conservative influence in its leadership.