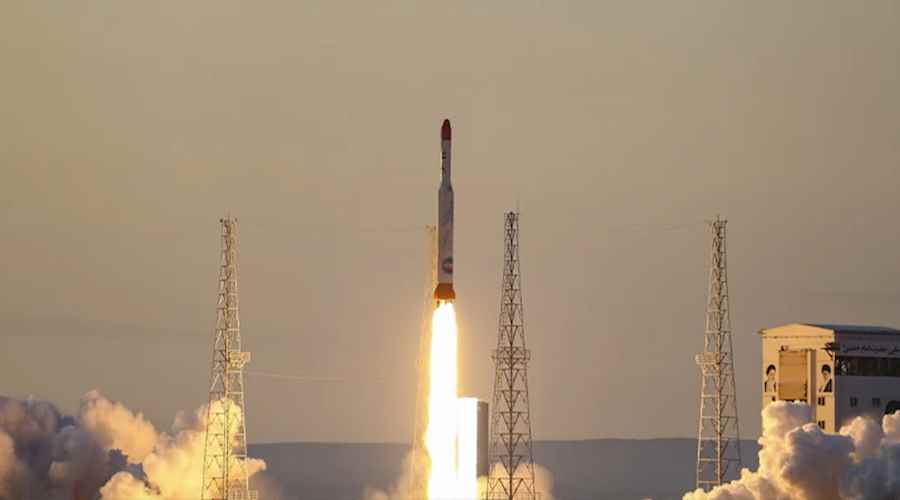 Commander of the Iranian Revolutionary Guards Corps’ Aerospace Force Amir Ali Hajizadeh, on July 24 during the Malik Ashtar Festival, announced that the country is preparing to launch a new satellite later this year using its Qaem satellite carrier.

On March 8, the IRGC said they put into orbit a military satellite named Noor-2 using the Qased satellite carrier. Earlier, Noor-2, an upgraded version of Noor-1 which is orbiting Earth at a height of 360 km, was launched by the IRGC.

The significance of the IRGC’s announcement of the new satellite launch at this timing lies in the following implications:

The new announcement came out a few days after US President Joe Biden in July wrapped up a trip to the Middle East. Ways for countering threats posed by Iran represented a main item on the agenda of Biden’s trip, which was evidenced by the Jerusalem Declaration, an agreement signed between the US and Israel to prevent Iran from acquiring nuclear weapons and to counter its destabilizing regional activities.

Moreover, at the Jeddah Security and Development Summit, attended by leaders of the Gulf Arab states, Iraq, Egypt and Jordan, Biden pledges to back the US regional friends and allies against Iran’s activities which are destabilizing the security of the region. Despite Gulf Arab states’ refusal to join an alliance proposed by the US to counter Iran, the stalemate at the nuclear talks is still unresolved.

Through the latest satellite test-launch Iran sought to escalate against Washington, especially because Iran is using such tests as a front for developing long-range intercontinental ballistic missiles capable of carrying nuclear warheads, an endeavor in evident violation of the United Nations Security Council’s Resolution 2231, which bans Iran from conducting such activities.

The launch coincides with Iran’s escalation of military and nuclear activities. On July 25, Mohammad Eslami, the head of the Iranian nuclear atomic energy, announced that Iran will keep the UN nuclear watchdog’s cameras turned off. On the same day, the International Atomic Energy Agency chief Rafael Grossi warned that Iran’s nuclear program is 'moving ahead very, very fast”, and that the agency now has very limited visibility on what is happening, which means that the IAEA is not able to piece together Iran's most important nuclear activities.

Kamal Kharazi, a senior advisor to Iran’s supreme leader, emphasized that Iran has the technical capabilities to manufacture a nuclear bomb, but has not decided to make one. The statement shows that Iran wants to put pressure on Washington to revive the nuclear deal based on Iran’s conditions, or to keep the status quo i.e. the stalemate in the nuclear talks, while Tehran continues to develop its nuclear capabilities.

At the military level, Tehran revealed a new naval unit made up of ships and submarines capable of carrying and launching all types of unmanned aerial vehicles. Moreover, the IRGC’s naval force claims to have new speedboats equipped with stealth systems to avoid radars used by US and British navies in the Gulf, which means the new boats can launch attacks on these Western forces.

Tehran’s latest announcements came after it carried out another failed launch of the satellite-carrying rocket Zuljanah on July 13, 2022 shortly after the launch. Additionally, Iran’s Simorgh program, another satellite-carrying rocket, failed to put its three payloads into orbit in December 2021. Tehran would later say that it will continue its attempts to overcome the failures.

The IRGC is attempting to send across messages both at home and abroad that it was able to overcome its recent crisis when a number of its top commanders and personnel were assassinated domestically and abroad. These include Colonel Hassan Sayyad Khodaei, commander of Unit 840, a covert unit tasked with abductions and killings of enemies outside Iran. Later, Colonel Ali Esmailzadeh, a colonel at the same unit, was assassinated along with other personnel.

Evident failures inside Iran’s security agencies were behind the assassinations and prompted the dismissal of top IRGC commanders including Hussein Taeb, the chief of the IRGC Intelligence Organization’s information security, who was replaced by General Mohammed Kazemi.

In Syria too, the IRGC received severe blows from Israeli air strikes which destroyed military posts, arms depots and equipment of the elite force and the Iranian-operated militias. The defeats which did damage the IRGC’s status and credibility inside and outside Iran prompted it to claim a new achievement in an attempt to restore confidence.

Several regional and international dynamics that coincide with the escalation put pressure on Tehran. These can be outlined as follows:

The announcement was made by Iran at a time when Washington was sending negative signs about Iran’s seriousness to return to the nuclear deal after the talks in Doha failed, due to Tehran imposing new conditions. Washington threatened to ratchet up pressure on Iran over its intransigence during the talks, and later imposed sanctions on entities and individuals accused of facilitating sales of Iranian oil to Asian markets.

Iran seeks to show that it is prepared for potential escalation of tensions resulting from failed talks with the western powers. To try and force western powers to make concessions, Iran also seeks to show that western pressures are meaningless and useless. This was reiterated by foreign ministry spokesman Nasser Kanani who said that Iran will not be rushed into a "quick" deal reviving its faltering 2015 nuclear accord with world powers. What helps Iran is that Washington is hesitant to impose a timeframe for the talks so as it will not have to admit its failure and look for alternative measures.

Israeli political and military leaders keep emphasizing the need for doing what it takes to slow down Iran’s nuclear program and counter the threats it poses in the region. As a result, Tel Aviv is intensifying its strikes against Iran as part of the so-called “Octopus Doctrine'', which implies directly targeting the head i.e. Iran, as well as its “tentacles” and proxies operating in the region.

One day before Iran announced preparations for launching a satellite using the Qaem satellite carrier, the ministry of security and intelligence announced that it arrested a group linked to Israel’s spy agency Mossad on the western border with Iraq’s Kurdistan region. It claims that the group planned attacks in Isfahan, home to the Natanz uranium enrichment plant and other nuclear and military facilities.

The development came a few days after reports claimed that Mossad agents caught and interrogated Yadollah Khedmati, a senior member of Iran’s Revolutionary Guards, on Iranian territory, and had him confess to his role in sending weapons to Irans’ militias in Syria, Iraq, Lebanon and Yemen. This is further evidence that Iran continues to be vulnerable to recurrent breaches by Israel.

Moreover, Israel continues to target Iranian presence inside Syria. Israel destroyed an arms depot of Iran’s IRGC located at the Colonel Haitham Suliman in Hajjira Town near Damascus, and a drone factory in Sayeda Zainab area, south of Damascus, known as the stronghold of Iran and its militias. The Israeli raid left at least ten Iranians dead.

3-   Attempts for rapprochement with Saudi Arabia:

Tehran and Riyadh had an exchange of positive messages after the Jeddah Security and Development Summit at which the Saudi Crown Prince announced that the Kingdom is prepared to cooperate with Iran, which he described as a “neighbor”, a statement that Iran welcomed.

Iraq’s foreign minister Fuad Hussein noted that a new round of diplomatic talks between Saudi Arabia and Iran will be held soon in Baghdad.

Iran seems to be seeking to reinforce its position at the nuclear talks and minimize the concessions that it might have to make. This, however, will create obstacles for any attempt to achieve real rapprochement with Saudi Arabia or other regional countries that demand that Iran stop its threats.

According to some assessments, Iran’s recent announcement of a missile test at this timing indicates its willingness to take escalatory measures in the coming period, especially if and when nuclear talks may falter. However, this bid will be faced by Israeli counter-escalation targeting Iran and its proxies in the region. Furthermore, it will create obstacles for Tehran’s efforts to improve relations with neighboring countries, especially if Iran continues its escalatory military and nuclear policies.